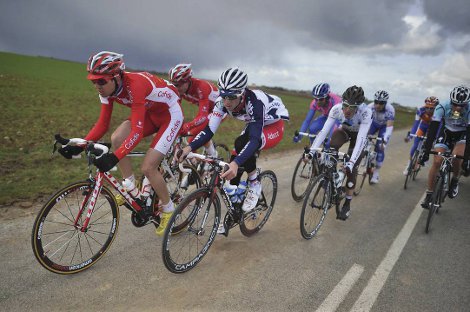 The sun can’t come soon enough for riders in the “Race to the Sun”.
Photo: Presse Sport/Papon

Valverde, 31 and who is fresh from winning the Tour of Andalusia, edged out Australia’s Simon Gerrans and Gianni Meersman from Belgium in a final sprint after a day’s racing in bracing temperatures. The Movistar rider’s Spanish compatriot Luis Leon Sanchez took fourth place ahead of Xavier Florencio.

A three-man break-away comprising Denmark’s Michael Morkov, Dutch rider Roy Curvers and France’s Jimmy Engoulvent opened up the race from the first kilometer. The trio led the chasing pack by nearly five minutes and were only caught in the final stages, with Engoulvent holding out until six kilometers from the finish.

Uzbekistan’s Sergey Lagutin then attacked with four kilometers to go but was caught in sight of the final kilometer marker, as Valverde’s team controlled the pursuit. Valverde, back in the peloton after serving a two-year doping ban, clawed back 10 seconds on Wiggins through bonus points and is now 20 seconds behind the Briton in the overall classification.

“Am I surprised to win after my suspension? Yes and no,” said Valverde, who was winning for the fourth time this season. “The important thing is to be in the required physical shape.”

Luxembourg’s Andy Schleck was forced to abandon the race on Tuesday morning after a bout of acute gastro-enteritis, his Radioshack team announced.

On Wednesday, the fourth stage takes the riders on a 178-kilometer route from Brive-la-Gaillarde to Rodez.

FRS Joins Up with US Military Cycling