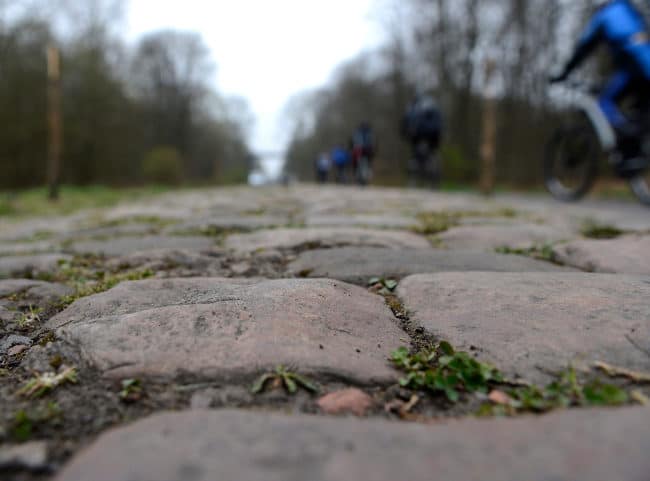 All eyes will be on world champion Peter Sagan during Sunday’s prestigious Paris-Roubaix one-day classic.  The charismatic Slovakian rider has hoisted himself into a higher dimension over the last six months, first winning the world title in Richmond, USA, in September and then, a week ago, claiming his first ‘Monument’ by winning the Tour of Flanders.
He’s the overwhelming favorite to add a second Monument over the cobbles
in the ‘Hell of the North’ race which starts in Compiegne near Paris before
finishing, 257.5km later, in the historic Roubaix outdoor velodrome.

At just 26 years of age, Tinkoff’s Sagan is starting to truly deliver on
the undoubted potential that first came to light in 2012. By then he had already proved he had ability by winning three stages at the 2011 Vuelta a Espana as well as a pair of stages at the Tour of Switzerland that year and likewise at Paris-Nice 12 months earlier.

But it was in winning the first of four straight green jerseys at the Tour
de France that Sagan most launched his name into the public spotlight and he didn’t need to win a huge number of stages at the Tour in order to win the green sprinters’ jersey as he picked up many points where the pure fast men struggled.

But before then he had also shown his one-day classic abilities, coming
second at Gent-Wevelgem, third in the Amstel Gold Race, fourth at Milan-San Remo and fifth at the Tour of Flanders, all in 2012. Those results convinced many that a victory at one of the Monuments, particularly those over cobbles, was a question of when, not if.

Yet his blistering 2012 made Sagan a marked man and he struggled in the
biggest races to deliver that high profile victory, finishing second at both
Milan-San Remo and Flanders in 2013 and fourth in both last year, while a
sixth-placed result in Paris-Roubaix in 2014 was the best he managed there.

Although he won Brabantse Pijl in 2013 and E3 Harelbeke in 2014, he became known far more for his near-misses, particularly at the Tour de France where he racked up second place finishes since his last stage win in 2013.

In 2015 alone he was second five times and had 10 top five finishes, but
failed to win a stage.

SOMETHING NEW
Yet his carefree attitude, wheelies over the finishing line, engaging smile
and quirky quips in broken English or Italian, make him a firm favourite with
fans and media alike.

“He’s a breath of fresh air,” said Paris-Roubaix race director Thierry
Gouvenou.  “He’s completely relaxed. At the Tour (de France) he’s the only one who’s able to jump three steps coming down from the changing rooms without another thought. He’s unpredictable.”
Sagan doesn’t conform to norms, according to FDJ team boss Marc Madiot.  “He attacks where no-one expects it. He rides on instinct, which makes him
unpredictable, while others are stuck in their moulds.”

Sagan won’t have things entirely his own way, though, despite the absence
of reigning champion John Degenkolb through injury.

Three-time former winner Fabian Cancellara is in his final season as a
professional and looking to go out with a bang after finishing second to Sagan
in Flanders.

Alexandre Kristoff, the man Sagan succeeded in Flanders, has the speed to beat the Slovak in a sprint finish.

Dutchman Niki Terpstra has one of the strongest teams in Etixx-Quick Step,
which helped him escape to victory in 2014 as other favourites eyed four-time
winner Tom Boonen, whose powers have diminished.

Another Dutchman, Lars Boom, has the strength to succeed while Team Sky
will be looking to Geraint Thomas and Luke Rowe, both of whom rode well in
Flanders.

Sprint specialist Mark Cavendish could be a dark horse on his return to
Paris-Roubaix having finished second to Marcel Kittel at the midweek
Scheldeprijs race, although he’s something of an unknown quantity.