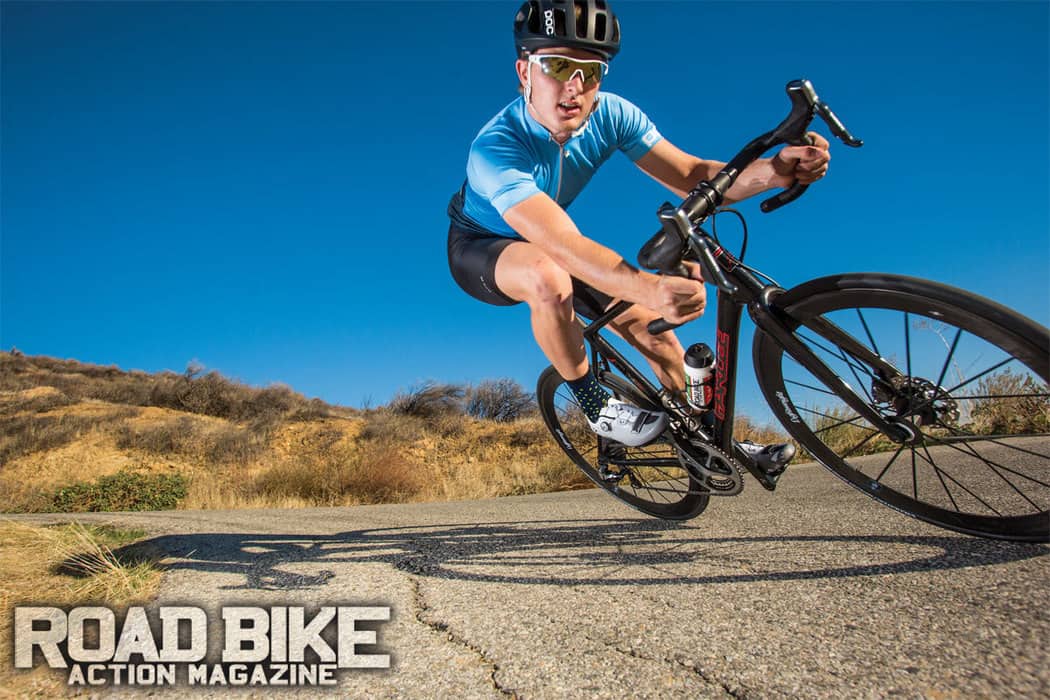 Originally skilled as a boat builder, it’s been 17 years since Bob Parlee first began applying his composites expertise to building bicycle frames. For years Parlee focused on building custom frames in their Beverly, Massachusetts, workshop, where they were as much known for their in-house painting capabilities as they were for their bespoke, carbon-lugged Z-series frames. Nowadays, the made-in-the-U.S. line of bikes represent just 10 percent of the company’s sales, while other models such as the Altum are sourced in Asia and open the door to more than just the ultra-niche customer.

The Altum was added to the Parlee line two years ago and aimed to be a do-it-all-type performance bike with geometry representative of the brand’s racing history. Even though it’s absent of any deep, aerodynamic tube profiles, the frame’s smooth lines and hidden seatpost clamp give it a rather sleek appearance. Parlee’s Tom Rodi describes it as, “A performance bike that doesn’t beat you up. It’s a byproduct of the bad road conditions where we are in New England, and we’ve tuned it for comfort.”

Two versions of the Altum exist—one for rim brakes and one for disc brakes. Rodi told us that the disc-brake model was already outselling the rim-brake version, and he expects that percentage difference to further increase. “The Altum Disc has been a surprise for us in how popular it’s been, which created some availability issues initially. People want disc brakes.”

Parlee gave the Altum Disc a couple of recent updates to include flat-mount disc-brake calipers and to shrink the front thru-axle down from 15mm to the now more commonly accepted 12mm. On the rear, a convertible dropout allows either a 12x142mm thru-axle or a quick release to be used. The main cable-entry port at the top of the downtube uses a modular design, with a plastic cable stop that snaps in and can be changed to work with whatever shifting and brake system you might have.

One of the most distinctive aspects of the frame is the Flex Fit feature, which is an adjustable-height front-end design that accommodates a range of fit preferences. Three different cap, or spacer, heights are available that integrate into the frame to avoid creating an aesthetic faux pas. The idea is that a rider who wants a more upright position can get the tallest cap, which is made to fit cleanly into the “humpback” portion of the top tube. This is a cleaner-looking solution to a stack of headset spacers and should minimize steerer tube flex, since the carbon cap has more structure to it than a standard spacer.

Part of the draw to Parlee is their custom paint program that can be had on any bike in their line, including the Altum Disc. “Getting a bike finished the way you want has become a calling card for us,” said Rodi. For a logo color change, you’re looking at around $300, while more elaborate, multiple-color designs could creep up from there. Rodi told us, “We often have projects in the $2000 to $3000 range, but the average is typically between $500 to $1500.”

The Altum Disc is available as a frameset for $4299, or in a number of build options. Our test bike isn’t quite entirely stock, considering the Lightweight Meilenstein Disc wheels it came with aren’t in the Parlee catalog, so we were sure to throw on other wheels more in line with the DT Spline R23 wheels that come on the stock Dura-Ace Di2 build once we finally had to part with the German-made dream wheels. Another upgrade our bike had was the Parlee carbon option, which swapped out Zipp’s aluminum Service Course parts for Parlee’s own seatpost, along with an oversized 35mm carbon handlebar and stem. Those pieces brought the price of the bike up from $7799 to $8549. If the Lightweight wheels were even an option, you would be looking at an astronomical price tag for the complete bike considering the wheels are $6500 by themselves.

Fortunately, the Altum Disc does come wrapped in a package that would be much more attractive to many more would-be buyers, and that’s with an Ultegra build for $5299 or Ultegra Di2 for $6299.

We spent a number of long days on the Altum Disc considering our test period coincided with a full schedule of Gran Fondos we rode in. So, in addition to our normal one- to two-hour lunch rides, we also got in a few five- to six-hour days, which is the only way you’re going to get a true sense of a bike’s comfort level.

Considering the Altum Disc falls under the “racer” banner due to its geometry, and not as an endurance bike, we felt it was a well-balanced ride compared to a number of others that target ultimate stiffness above all else. With that said, an easy place that Parlee could have found more compliance without actually sacrificing any performance would have been going with a 27.2mm seatpost rather than the 31.6mm post. Throwing on a pair of 28mm-wide tires, which is the max width the frame allows, was an easy way for us to further improve the ride quality.

The Altum Disc delivered a balanced ride that wasn’t overly tweaked in one specific direction. It’s not the outright stiffest or most compliant bike that we’ve ridden, but it had the performance to make the shorter, fast days a blast, and the comfort to make the 100-milers manageable.

Even though our particular build was rather opulent, the fact that you can get the very same frameset with an Ultegra group for $5299 opens the door to a much broader range of customers that want to experience a Parlee. And, the fact that custom paint options abound are a very nice touch.