The Mobile line is a new on bike phone case option 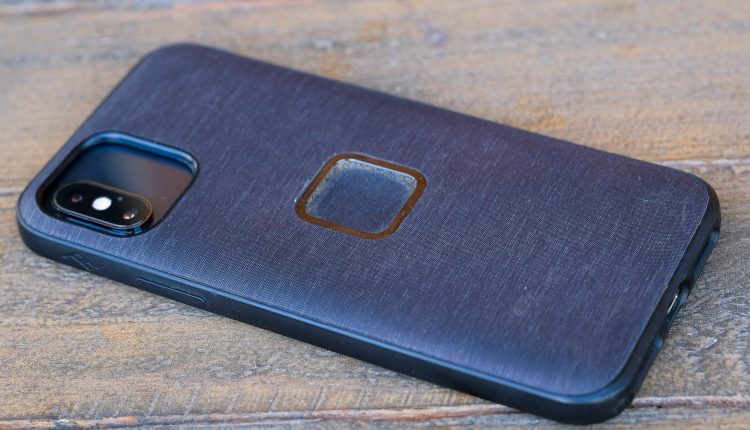 It’s been nearly a year since we first received early samples from Peak Design (PD) and their Mobile line. For those that are avid photographers, the name is likely familiar but most cyclists probably have never heard the name, they are best known for their camera straps and photography accessories. Since the mobile phone is the most used camera in the world, it’s no surprise they are getting into the phone case game with an emphasis on photography.

Now you might be asking, why has it taken a year to get the review done? Well, it hasn’t but we hate telling you about products that you can’t buy. For us it just didn’t make sense to show off the mobile line when it wasn’t available and they had no specific ship date, honestly, they wouldn’t even let you pre-order until now. This turned out to be a good thing as we got extensive time testing the case, and all the mounts and accessories.

It starts with the Everyday Case and they now have two versions, with or without a loop. They make cases for the Apple iPhone 11 all the way to the newest iPhone 13 offerings, as well as a few Samsung Galaxy models. We did fit our old iPhone 10 into an iPhone 11 case with the only funky part being the camera cutout was a bit too big. If you have a different phone than what Peak Design offers, they also make the Universal Adapter that can stick to the back of a case.

The reason we wanted to try the line is that they make an out-front mount for a bicycle. We normally don’t and wouldn’t mount our phone to the bars but with indoor cycling and trainers being so popular, this is a great option. Still, some would prefer their mobile phone instead of a dedicated cycling computer like a Wahoo Bolt or Garmin Edge 130. If you look closely, the images of our phone in the Wahoo Bolt V2 review, the Everyday Case is what we were using.

Beyond the cycling-specific out-front mount there are plenty of mounting options for vehicles, motorcycles, strollers and just about anywhere. For us, this is important because beyond our cycling needs we don’t want to change cases or compromise during regular life. We have used most of the mounts and they all function as designed with no issues.

We should start with the fact that the products we got were first run prototype/ samples and they were shipped to us before MagSafe charging was available. PD has told us that the size and design of their magnetic system has changed slightly to better accommodate wireless charging. With that said we have been using a different brand wireless charger with the PD case installed and had no issues. PD has announced two wireless charger options, one for home and one for a vehicle but we have not tested either.

Honestly, the case has been stellar and while we had originally expected to test it and go back to our normal case choice, the PD never left our phone. The case is thin while still offering a magnetic and mechanical retention system. For the bike the out-front mount clips into the square mechanical indention. There are buttons on the underside that release it, so it holds secure while riding. It should be noted that if you use the universal mount that sticks to an existing case, we wouldn’t recommend riding outdoors using the out-front mount. The 3M tape has held secure but we would be afraid that the adhesion is not enough on all cases. For indoor and trainer workouts it would be fine. Thanks to the square design, the phone can be mounted landscape or vertical.

Looking at the rest of the line, we have found the mini fold flat tripod very useful but the most used accessory has been the car mount. Both utilize the magnetic portion of the mount with no need for the extra security of the mechanical retention. On one of our vehicles we already had a phone mount so we stuck the wall mount to it and it functioned perfectly. With that said, we don’t think the wall mount was designed for the SoCal heat and the decorative fabric that covers the mount would peel at the edges when left in a hot car.

After over a year of nonstop use, the Everyday case has held up great. Countless phone drops and even a few crashes on the bike while it was in our pocket, and our phone still looks like new. The decorative case material has held up and there is only a small amount of noticeable damage at the corner of the square mechanical mount metal edge. We will say that the indention for the mechanical mount has picked up lint and debris but overall it has been easy to clean.

The mounting system has been really good and with so many options we haven’t felt like we needed anything more. To invest in the full system is a bit expensive, but for us, we say it’s worth it. The accessory we have pre-ordered is the new wireless charger for the car. Currently, we just plug a normal cord in but how convenient would it be for the charger to be integrated?

Peak Design also told us they have updated the out-front mount with a thumb screw that allows you to quickly reposition the mount, allowing you to pivot it up and capture video of your ride while using your phone. Maybe we should have Zap try that during his Facebook live videos so he can keep both hands safely on the bars. We likely wouldn’t use this often but there is also a GoPro mount so you could mount your action camera easily too.

At the end of the day the Peak Design case is a solid option for everyday life and cycling. Hopefully, with the availability of the pre-order they will ship in Nov-Dec as they claim. We have ordered our case to fit our newest iPhone as well as both wireless chargers. We are hooked and knowing Peak Design, they will continue to release new mounts for even more specific needs and phone options.

Let us know, do you mount your phone to the bars while you ride? Would you use this while riding the trainer and indoor workouts?