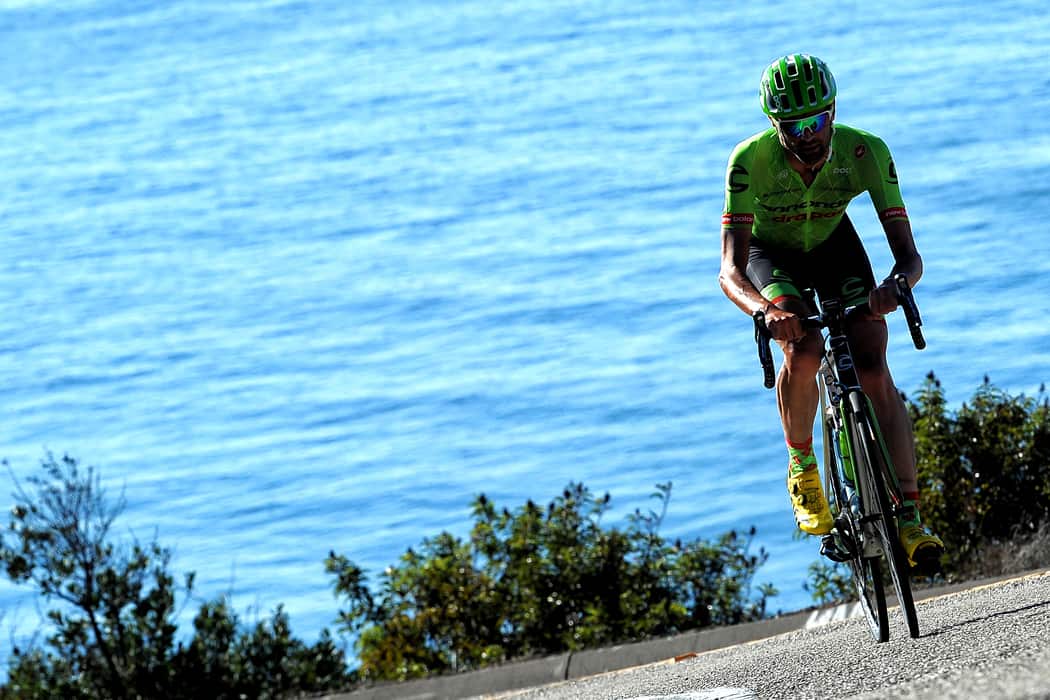 Share
By: Troy Templin
Photo: VeloImages
Newly retired from a ten year career on the World Tour (most recently with the Cannondale-Drapac team), Phil Gaimon has not only been showing up at local SoCal rides, but more impressively, he’s been accepting Strava challenges from his friends who not only find the KOM’s made by admitted dopers to be especially reprehensible, but also, worth beating.
We caught up with Phil following the local Sweet Salt ride in the San Fernando Valley to see how retirement is treating him and find out about all the social media attention he has been getting for out-kinging the doper KOMs.
RBA: What have you been up to since you retired, what’s filling the piggy bank?
Phil: Well first off I’m embracing the world outside of cycling, you know staying out late (past 11 pm) and even started dating again. But as many may know even at a world tour level I always need a side hustle, and now it’s my full-time thing. Between writing and planning the Malibu Gran Cookie Dough ride (10-14-17), I’m staying busy. Trying to keep the sponsors happy and stay relevant I guess.
RBA: Sponsors? I thought you were retired?
Phil: Yeah well it’s a bit complicated, but I left the team a bit prematurely if you ask me and still have plenty of speed. With my contract not over yet but no races on the calendar I was still riding with the sponsorship of the team till the end of 2016. I was chatting with some friends here in LA, and they were telling me about a few segments that they have been pushing hard for but couldn’t overtake the leaders blistering KOM. With the KOM holders name being pushed around in the media lately they thought why not use my world tour level power to overtake a few of the segments and see if they could be beaten, you know for fun. Well, let’s just say my new KOM’s stirred up a bit of social media attention, and I don’t mind the attention, but the sponsors like it even more.
RBA: Wait let’s be clear you’re being sponsored to take Strava KOM’s?
Phil: When you put it that way, I guess I kinda am. I’m still working out the details, but we are working on a Strava Mission. I’m going to travel around the country to ten different locations and go after an iconic or popular KOMs. The details are still a bit rough, but the premise is to use my fitness to get a bit of online buzz and hopefully get people out to the ride. We will have a Q&A session and then even a book signing for each event. There are a lot of pros on the top of the leader’s boards all over but many of them are not full-out efforts, and my goal is to beat their times.
RBA: So this isn’t a stab at anyone or group of people in particular as social media has suggested?
Phil: Listen, I’ve been very clear that I’m not a fan of doping, but no this isn’t me going after KOM’s of dopers. I think the local KoM’s have been so popular because many riders that would look at those times related them to doping and it was their first experience of being a victim of doping, even if it’s just a virtual leaderboard. The online attention has been crazy and pushed me to go after nearly all of LA’s top segments no matter who has the top time. It’s been really fun, and I’ve been training just as hard for this as I was when I was racing world tour, maybe harder. I have a connection with the fans that I didn’t always feel before and it has pushed me to some personal power records. I even rode the trainer the other day, and I can’t tell you the last time I put myself through that, but when the rain doesn’t stop you’ve got to do it to stay fit. I won’t lie though training for 12 hours a week instead of 30 hours is much better for the personal life and my 5-minute to 15-minute power has gone up too.
RBA: Okay, enough talk about you beating up on Strava times and more on your other endeavors.
Phil: I’m releasing two books, one in April and one in October. The first one is called “Ask a Pro” and it’s a collection of my columns that I wrote while I was racing. This is a funny book with no real direction just a lot of insight to being a pro and the things we go through. I add a bit of commentary and poke fun at myself plus you can see how much I’ve changed through my career.
The second one is more serious and meaningful. This one I hope is a “best seller” because I put a lot into it. Besides the books I’m planning to making my Fondo bigger and better for year two. I learned a lot from my first event and its only getting better. We are partnering with Chef’s Cycle to raise money for No Kid Hungry. Then to bring a bit more of that LA experience to the ride, we are having a host of celebrity chefs prepare the food. Last I’ve got my Podcast called Real Talent on I-tunes. It turns out there’s a lot of work you can do when you retire!