Throwback Thursday: The Day I Fell In Love With A Tour Stage Winner 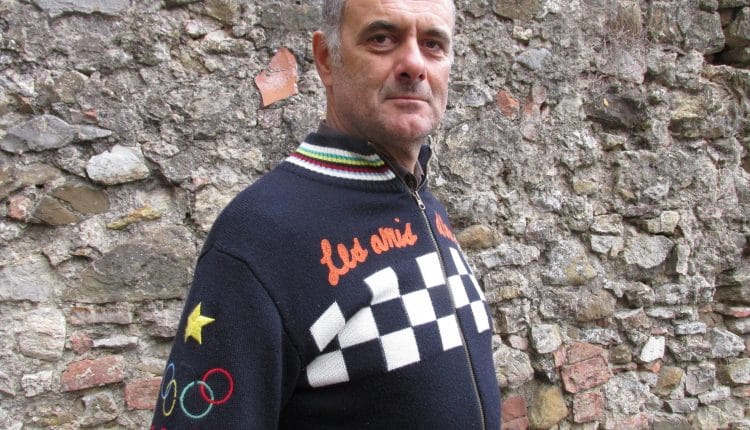 I’ll never forget the first time I met Eros Poli. It was in a wonderous, centuries old  dinning room of a small hotel tucked into the rolling hills of Tuscany. I was on a trip with InGamba to participate in the famous E’roica bike race for old bikes. As I related in the story I wrote about the trip for RBA, ignorant of who he was, I was initially put-off by the suave Italian for his incessant name-dropping at the dinner table. Nonetheless, I sat and listened to his endless tall tales.

After dinner I went to my room and Googled his name – “holy crap!” Eros Poli was as real deal as it gets. By the end of the week that included many miles ridden and glasses of wine consumed, we were fast friends.  That initial fatigue of sitting next to him at dinner had been replaced by a heartfelt honor of having the opportunity to ride through Italy, laughing with and learning with a truly great champion.

The following tribute was sent out as a press release by Le Tour de France as they continue to recognize the special riders who have made the history of the Tour de France so special.

“Eros Poli spared a delicate thought for all the lowly riders of the peloton. For all the anonymous assistants and loyal servants of their kings.”

“Far behind riders of the stature of Eddy Merckx, Bernard Hinault and Mark Cavendish, in the history of the Tour de France there have been almost three hundred men who only got a fleeting taste of glory. In 1994, the Mont Ventoux was the focal point of the stage to Carpentras, where Eros Poli, one of the worst climbers in the peloton, managed to win after a 171 kilometers alone at the front in a display of sheer Italian class.

“He looked like a fish out of water, but he was about to land the catch of a lifetime! Eros Poli, the archetypical self-effacing rider, was perfectly comfortable with his role as a domestique. The indefatigable, powerful and devoted Italian was one of the cogs in the machine of Mario Cipollini, a sprinter who never failed to blast away from the opposition as long as his train put him in the right position. Whether it was pulling on long straights to shut down an escape or shepherding and protecting his captain from the wind in the finale, Eros was top of the class.

“In the mountains, he was also good at setting the right pace in the gruppetto to make sure the worst climbers in the peloton finished inside the time limit. The Giant from Verona was one of these dreadful mountain men. Seeing him in action in the stage from Montpellier to Carpentras seemed as far-fetched as seeing an anvil have a go at the 4×100 meters medley world record. Yet the 1994 was a bag of surprises.

“It all started when “Cipo” suffered a nasty injury during the last edition of the Vuelta held in April. Without the flamboyant sprinter to rack up win after win in the first week of the Tour, Mercatone Uno had been flailing around like a fish out of water since the start in Lille. Eros decided to roll the dice with solo attacks, for example in the stage to Futuroscope, but was bested by stage hunters from GB-MG Maglificio. It was precisely one of them, Rolf Järmann, who attacked treacherously when most of the peloton had ground to a halt for a “technical stop”. This angered Eros Poli, who caught the insolent Swiss, dropped him and went on a solo adventure with 171 kilometers to go, as if he had forgotten that the Mont Ventoux stood in his way.

“The gamble seemed insane at first, but Eros Poli steadily worked to shorten the odds. As he reached the foot of the Bald Mountain with a margin of 23′45″, his objective became clear. He had to limit the damage to a minute per kilometer and crown the Mont Ventoux with about 4 minutes to spare if he was to win the stage. Poli dragged his 1.94 m, 87 kg frame up the roads of the mountain, sweating like an animal and grinding on despite Pantani jumping from the peloton and mounting a furious chase. He went over the top and started the descent to Carpentras, still 41 kilometers away. However, the toughest part was over for Poli, who had been part of the team that won gold in the team time trial in the Los Angeles Olympics and felt right at home chugging along on the flat. He ended up crossing the line with 3′39″ on the runner-up.

“The following day, Françoise Inizan from L’Équipe described Poli’s victory as a poetic and metaphorical work: “Eros Poli spared a delicate thought for all the lowly riders of the peloton. For all the anonymous assistants and loyal servants of their kings.”