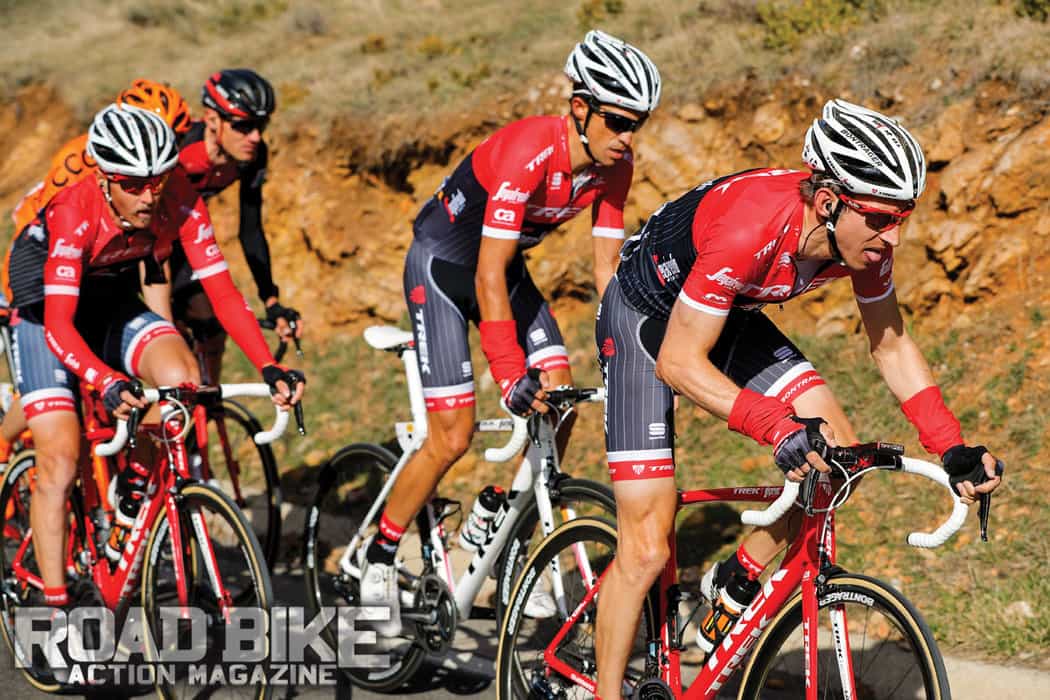 As most cyclists know, the last few years the word “power” has taken on a whole new meaning from the days when it most accurately was used as a reflection of muscle mass. No more. These days, “power” is used as a general noun to describe the means of specific training. It is also the most accurate way to calculate calories burned and a great tool for riders of all levels. Heart-rate monitoring is still a great training tool, but it’s a delayed effect of power on the body that is also affected by many other variables.

Why power? Simple, because as a measurement of expended force, it is the truest gauge of a rider’s true strengths. Whether you’re climbing or descending, if you’re at sea level or 10,000 feet of elevation, the power meter will be able to deliver consistent numbers that provide the rider with a useful baseline of performance.

Why power now? Because over the years as the number of power meters on the market has expanded, the cost, while still not cheap, has fallen to make a range of systems far more attainable. Knowing what your power numbers are has the potential to affect performance more than any new bike or gram-trimming product ever could. Here is an overview of the 10 most popular systems currently available and one that offers much promise but is not yet on the market. 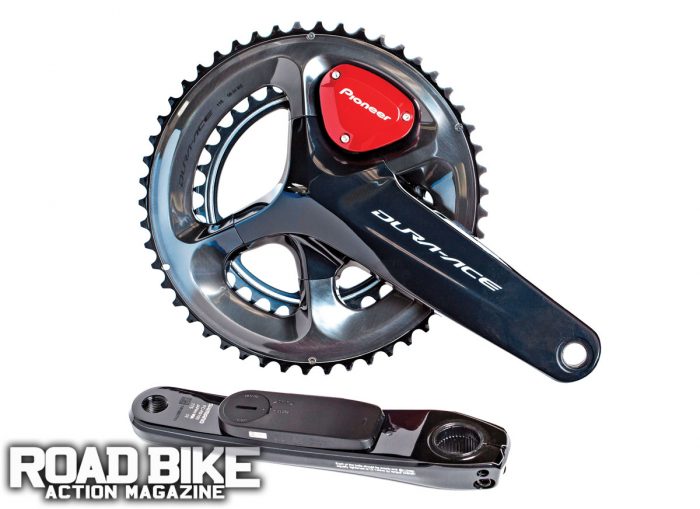 The Pioneer system is one of the most advanced power systems on the market when combined with their head unit. What the Pioneer system provides is 12 points of rotational data per pedal stroke. This may seem overwhelming, but it not only tells you your continuous power, but also uses its eight strain gauges (four per crankarm) to tell you which direction the force is being applied on each leg at each of the 12 points. This is unlike most other systems that send the power data every second. In turn, it can be used with their real-time Training Assist to improve pedal stroke and power efficiency. In essence, Pioneer believes that the more data received equals a more accurate and precise tool. 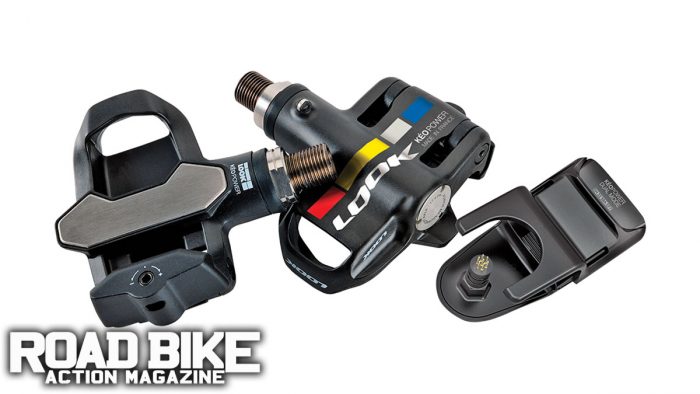 Look is on their third edition of the Keo Power pedals and currently offers two versions. The Regular will measure power independently from both left and right pedals using strain gauges in the pedal’s axle. Look also offers the Essential, which is a left-side-only measurement. The setup on these pedals is a bit more involved than a traditional pedal and uses a transmitting pod to deliver to both Bluetooth and ANT+ devices. The upside is if you’re already a Look Keo user, then the Power pedals use the same cleats and have the same feel that you already love. 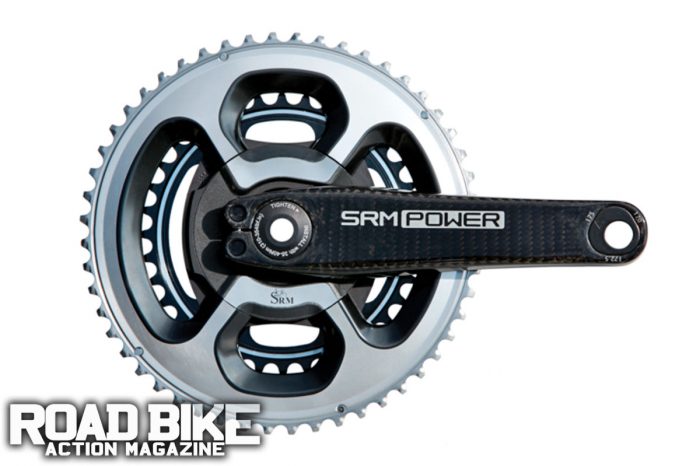 SRM is the original cycling power meter company and for a long time the gold standard for power reliability. When partnered with one of the SRM head units, you get the most out of the product. They have just recently partnered with Look Cycles to offer a crankset that uses a modular concept for the arms and the Look Trilobe Technology, which allows one crankarm to function in three lengths—170mm, 172.5mm and 175mm. With systems that partner with nearly all the gruppos on the market, SRM continues to be a favorite among countless pro riders who rely on the German brand’s proven reliability and accuracy. 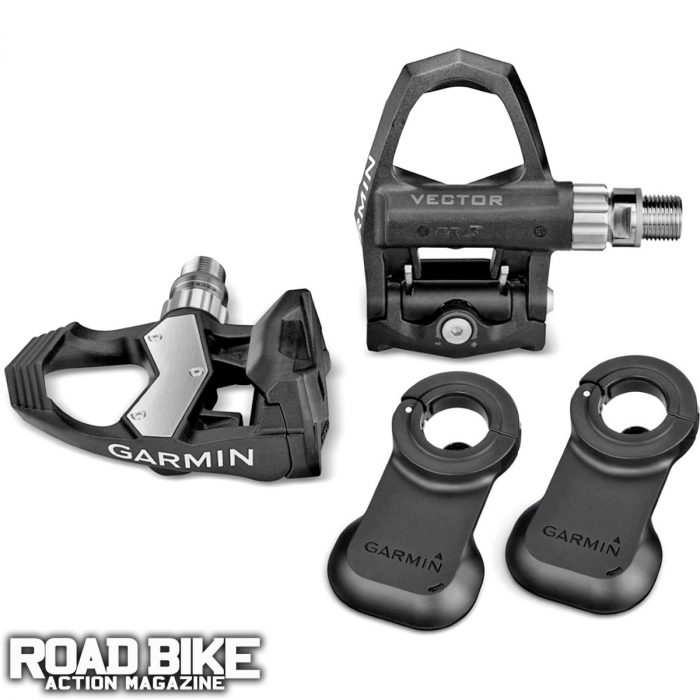 Garmin is a pedal-based power meter and currently has two versions: The higher-end model is the Vector 2, which independently records power from both the left and right crankarm. The Vector 2S is the single-sided version that will only read power from the left arm. If you choose the Vector 2S and in the future want to upgrade, Garmin offers an upgrade pedal to offer true left and right power. When you partner the Vector 2 with a current Garmin cycling computer, you will get Cycling Dynamics. This is an advanced set of matrixes that lets you tailor your training around your specific weaknesses and strengths by showing you exactly where you’re generating power throughout the pedal stroke. It also indicates where force is being applied on the pedal itself so you can ensure proper cleat position, as well as when and how long you were seated versus standing so you can gauge position effectiveness. 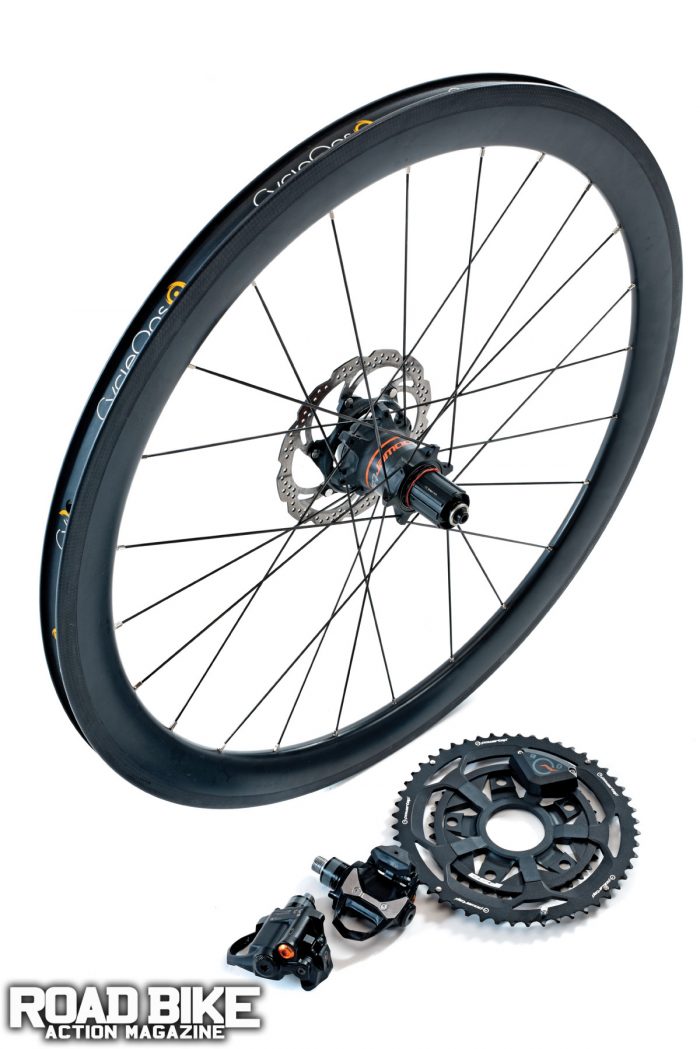 Powertap has been a leader in cycling power meters and has expanded their line of offerings to include not only the original hub-based system, but also new chainring- and pedal-based power meters too. Each of their platforms will measure total power, and for the pedal-based system, you will get independent left and right measurements for the most reliable power balance. Owing to its reliability and simple, user-friendly platform, the hub system has been a top choice for years. The chainrings are a great option, as they will mate with nearly any five-bolt crank that is already installed on a bicycle. The pedals are one of the most user-friendly on the market and simply thread to your cranks like any other pedal. 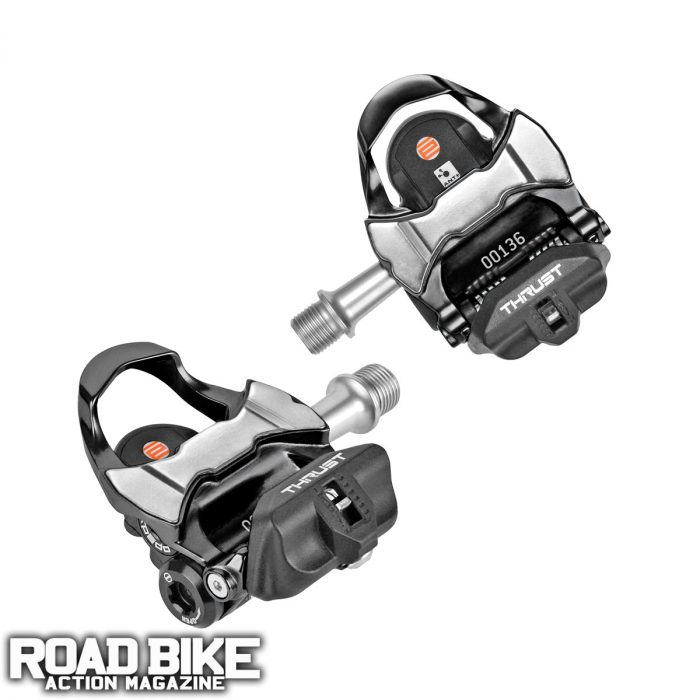 Xpedo has been working on their Thrust E power pedal for a few years now and will be hitting markets very soon. For Xpedo, it has been very important that the system not only gives accurate and reliable power, but that it is also user-friendly too. Similar to the Power Tap pedal, the Thrust E pedal doesn’t need any pods or a complicated setup; instead, it installs just like any other pedal and measures the power on the platform rather than the spindle. This makes for very easy swapping between bikes. They measure power independently per side, giving you a true balance and also very accurate total power. The Thrust E is Keo-cleat compatible and is powered by the easy-to-find AA battery. 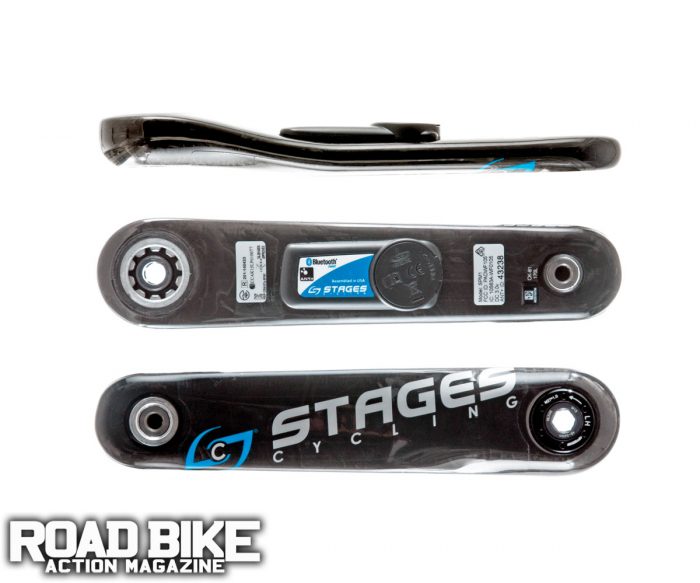 Stages hit the market a few years back and made great strides in popularity largely for one reason—price. They have been a leader in manufacturing single-sided power meters that rely on strain gauges located on the left crankarm only. This means that they are simple to install and add very little to almost no weight to a stock setup. With their proprietary algorithms that estimate total power, you get a great power meter for those just entering the power market. They offer many different options to match nearly any alloy crank and now offer a carbon option too. They are both Bluetooth and ANT+ compatible, and with many of their options you can send in your current left crankarm and a few days later will have a Stages unit installed. 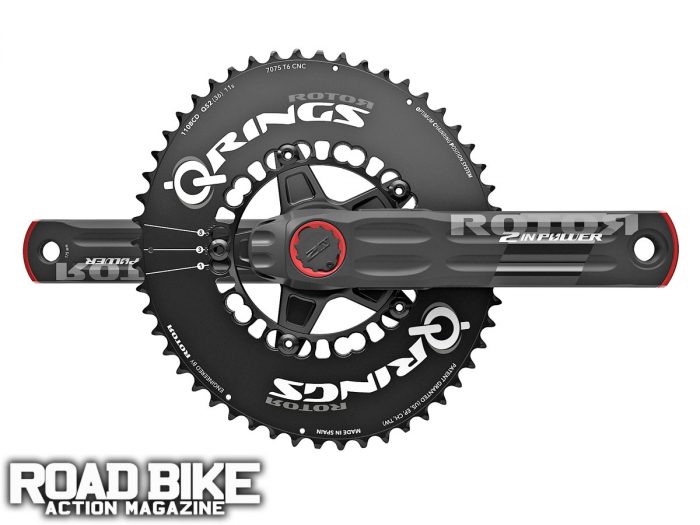 Rotor is currently offering two different systems that measure power from the spindle in the bottom bracket. The 2INPower measures left and right, while the INPower measures left only. Both systems use a 30mm spindle, and Rotor offers a wide range of bottom brackets to pair their cranks with your specific bike. One of the highlights of their system is that it’s not only optimized for traditional rings but also for elliptical chainrings, more
specifically their Q-rings. 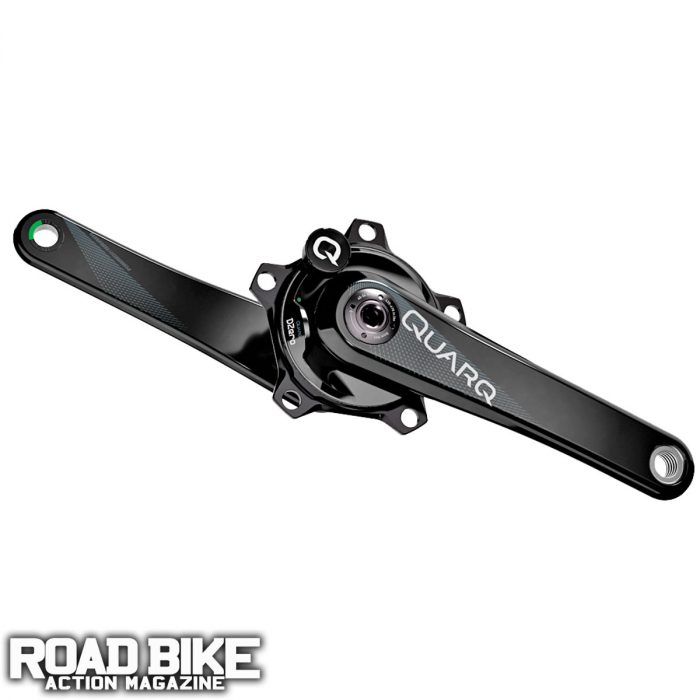 Quarq offers a large selection of crank-based power meters that all use five strain gauges located in the spider for total power measurement. They offer full cranks and spider-only options with alloy cranks starting at $779 and spider only starting at $679. All of their current offerings have power balance, IPX7 waterproof rating, are Bluetooth and ANT+ compatible. With a claimed accuracy of 1.5 percent with no cadence magnet required. For those who are using a four-bolt Shimano crankset, Quarq is offering a four-bolt option that aesthetically looks great when matched with Shimano 9000 chainrings. 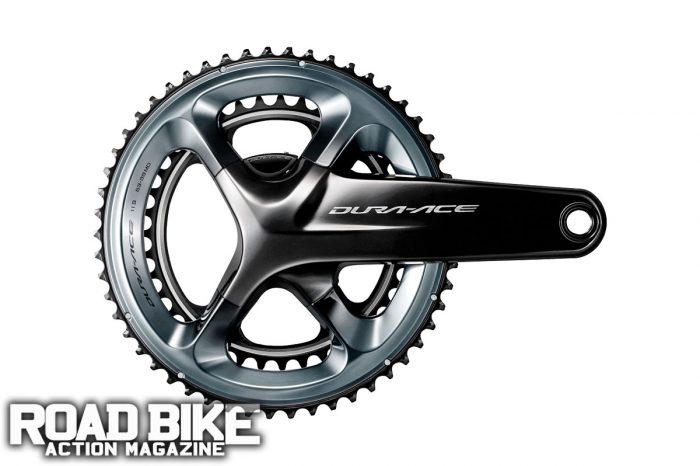 Shimano has announced their first power meter in conjunction with the new Dura-Ace 9100 group. The crank-based system uses two sensors, one on each crankarm, to measure power for dual-leg accuracy. The unit will have an internal rechargeable battery in the spindle that is wired to both arms with a claimed 300-hour life. The unit has both Bluetooth and ANT+, but can only transmit through ANT+; the Bluetooth is currently for transmitting firmware updates and diagnostics only. It has not shipped yet, and many of the exact stats, like price and weight, have not been released yet. 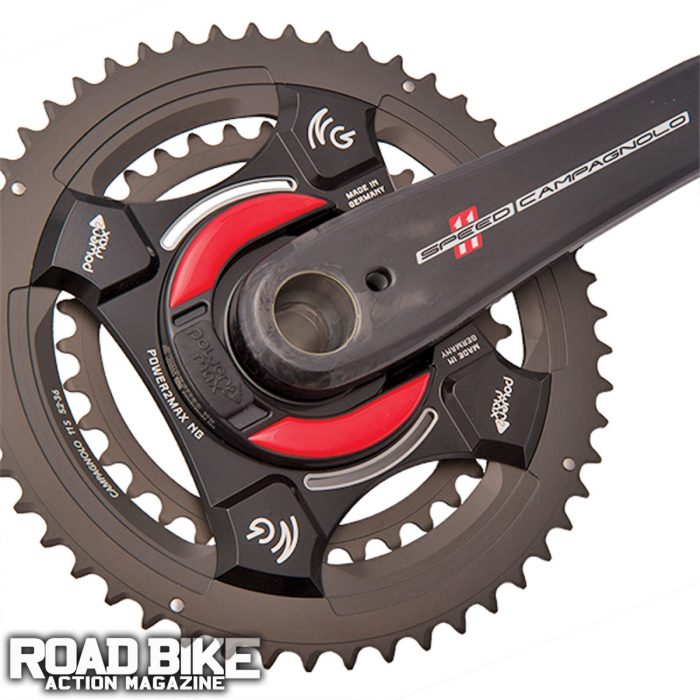 Power2Max has been one of the industry’s go-to companies when it comes to reliable, “complete” (dual-sided) power that’s available at a very affordable price. With the release of their newest NG line, they are changing it up a bit, offering even better accuracy and reliability with the lowest claimed offset of +/-1-percent accuracy. The new NG line is a spider-based power meter that features an internal rechargeable battery and both Bluetooth and ANT+ connection. With systems that pair with most of the industry’s most popular cranks and bottom brackets, they will most likely have an option that fits your needs. The Power2Max power meters are handcrafted in Germany and pride themselves on quality and accuracy.