The question you don't want to ask - dude, where's my bike? 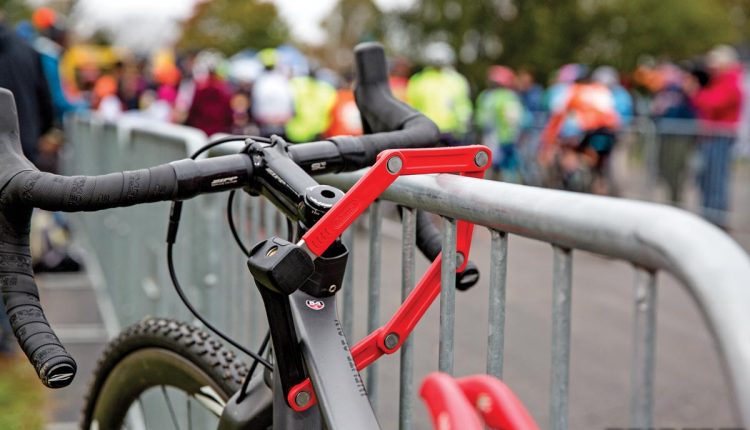 How many bike owners have experienced that sinking feeling of returning to where they parked their bike, only to find a broken cable or padlock on the ground and their bike no more?!

Why So Many Thefts?
Recent industry estimates say there are approximately one hundred million bicycles in the United States. With that many bikes, it is not surprising that they’ve become a target for thieves. The FBI crime statistics reflect nearly 250,000 reported bike thefts in 2017. Many have suggested that this figure probably represents less than half of all the bikes that are taken. Why are so many bicycles stolen?

To start with, bikes are an easy target of opportunity that are easily turned over with fairly low consequences of being caught and/or prosecuted.

Second, places like college and university campuses, schools, coffee shops, open garage doors, and even apartment complexes with bikes stored on outside patios and decks are a supermarket for thieves. Thieves know that most cyclists often neither lock nor use a good lock on their bikes. They also know that most cyclists do not record their serial numbers. Disappointingly, less than one third of 1 percent of stolen bicycles are recovered.

AN OUNCE OF PREVENTION
During my career in law enforcement, I investigated hundreds of bike thefts. The methods employed by bike thieves are varied, but most have a couple of things in common. As mentioned, many cyclists don’t bother to lock their bikes. The attitude of “I was only gone for a few minutes” simply doesn’t work. How long does it take to hop on a bike and be out of sight? The other method involves defeating the security device employed by the bike owner.

“Just remember, even a heavy-duty lock can be defeated by the resolute criminal. We once apprehended one well-equipped thief armed with a high-speed rotary cutting tool powered by a portable 12-volt battery. This device would cut through a U-Lock in about 30 seconds.”

If a thief is really determined, they will get your bike—even the best lock in the world will only slow them down. You want a lock that will deter a thief long enough to choose an easier target. That being said, I never cease to be amazed at the bike owner who would use a $10 lock on a $3000 bike. I used to tell bike-theft victims that their bike is only worth the money spent on the lock.

The bike thief’s best friend is a pair of bolt cutters. They will cut through the average padlock, chain or cable in a matter of seconds and are highly transportable, fitting into a backpack or down a trouser leg. For optimum security, it pays to invest in a heavy-duty lock, such as the reinforced U-type lock by Abus, Kryptonite or other companies. For short-term stops where you might easily keep an eye on your bike, lightweight locks, such as the Ottolock, HipLok, Abus and others, are a viable alternative to prevent the snatch-and-ride.

WHAT IS HEAVY DUTY?
Just remember, even a heavy-duty lock can be defeated by the resolute criminal. We once apprehended one well-equipped thief armed with a high-speed rotary cutting tool powered by a portable 12-volt battery. This device would cut through a U-Lock in about 30 seconds.

The best deterrent for a thief—short of taking your bike with you to class or your office—is the bike locker if your city, school or employer provide them. Next to that, many campuses and large corporations are now offering monitored bike compounds where owners can park their bikes under the surveillance of an attendant.

I might mention a couple of points of common sense here. When locking your bike, try to lock it to a rack, a large tree or some other immovable object that prevents the security device from being lifted. I actually had to laugh when a fellow officer called me over to see an expensive bike chained to a pole about 6 feet high with nothing atop it. All a thief had to do was merely lift it over his head and it would have been gone. Since it was considered to be illegally parked, we impounded it for safekeeping and left a note for the owner.

When securing your bike, don’t lock it to stairwell railings or some other place where it may pose a hazard to pedestrians or may be in violation of a local ordinance. If you have quick-release wheels, be sure to lock both wheels together to the frame and then to the rack. I have seen a number of cases in which the bike owner locked the front wheel to the bike rack, only to return to find the front wheel still secure but the rest of the bike missing.

“As a last resort, if you find yourself stopping for a short coffee break without a lock, try leaving your bike in its highest gear. That will at least make it difficult for a thief to just hop on and ride away quickly.”

Not securing both wheels will also entice thieves to steal one or both wheels. There is a very large market for used bicycle components, and there is no way to trace most of them. It might also be worth stating here that you should save your fire-breathing carbon superbike for rides where you can maintain it under your control. For daily commutes into high-risk areas, buy a bike that is not quite so enticing to a thief. 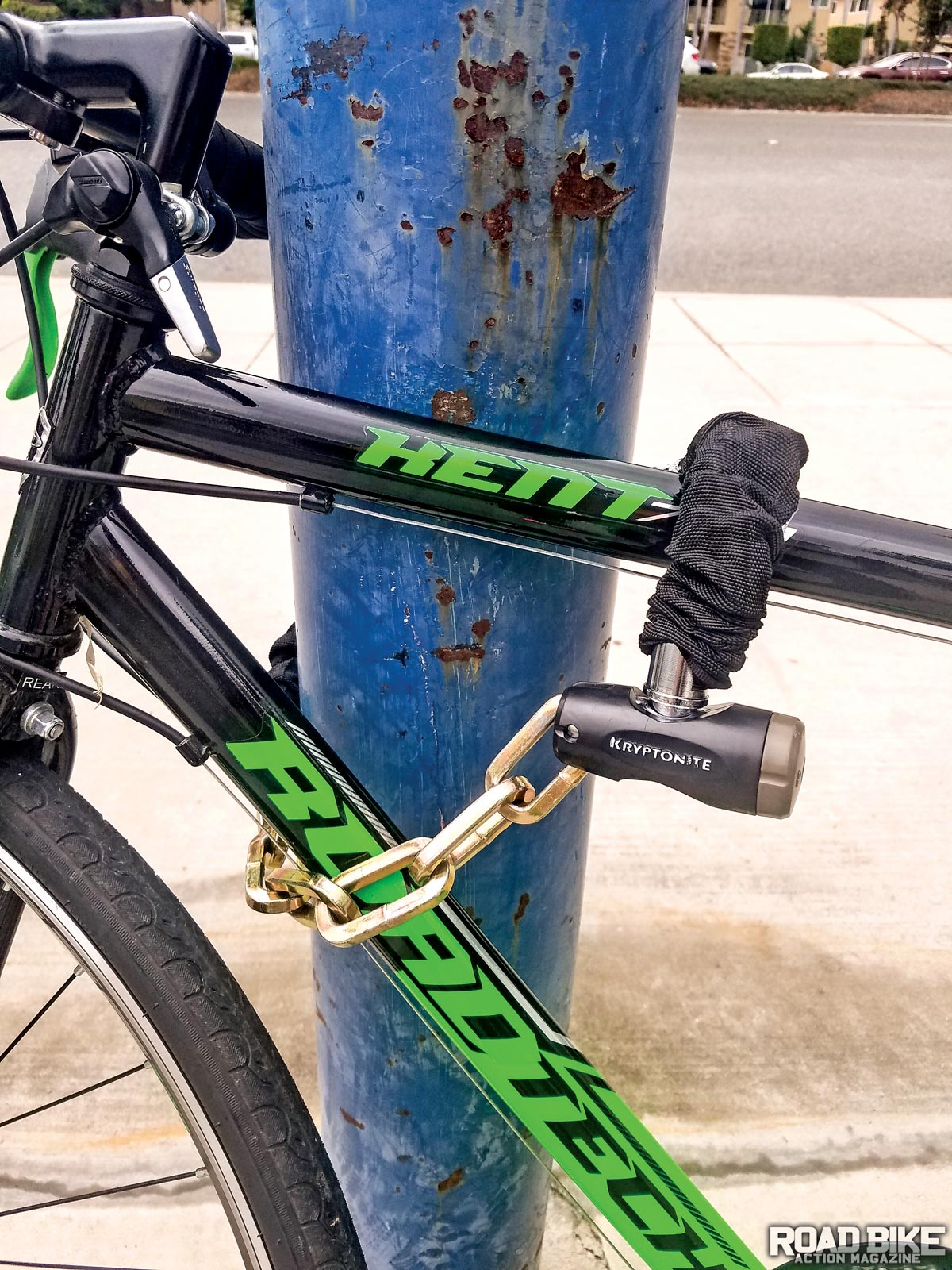 With residential burglaries on the rise, it’s also worth investing in a large security cable tethered to a wall or other immovable fixture for your bikes when parked in your garage or other storage area. Most burglars are in a hurry, particularly if there is a home security system, and may not want to mess with trying to cut a heavy-duty cable on your bike.

As a last resort, if you find yourself stopping for a short coffee break without a lock, try leaving your bike in its highest gear. That will at least make it difficult for a thief to just hop on and ride away quickly. And, as a note of caution, many thieves are drug addicts that may be under the influence and/or armed with a weapon, so extreme caution should be employed in confronting any thief; your life is worth more than your bike.

A POUND OF CURE
So, what happens if your bike is stolen? First of all, promptly file a police report with a complete description, including any special components. And, if you really want your bike back, make sure you have previously recorded the serial number and taken pictures of it. Use your phone and take photos of your bike and serial number and you’ll have them handy in case it is stolen. The photos can be forwarded to the responding agency and included in
the report.

Without a serial number, it is very difficult to prove ownership unless you truly have a unique bike, and that’s where the photos come in as well. Many jurisdictions also offer bicycle licensing programs that will record information about your bike, including the serial number. If you cannot locate a serial number or are unsure, you may use an OAN, or Owner Applied Number. This involves engraving a unique number, usually your driver’s license with the abbreviation for your state.

Don’t use your social security number, as law enforcement has no way of accessing the SSN system to contact you, and you really don’t want that number floating around. OANs can also be entered into law-enforcement databases to recover stolen property. Next, don’t expect the police to assign a squad of detectives to investigate your bike theft. Cases are assigned by importance and, unfortunately, bike theft is pretty low in that order.

Most departments won’t even notify outside agencies of the theft unless it just occurred and there is a suspect description and direction of travel. What will happen is—and this is where the serial number is of paramount importance—it will be entered into the nationwide database, the National Crime Information Center or NCIC. In that way, if another cop in any other jurisdiction in the United States comes across your bike and runs the serial number, it will come back as stolen, be recovered and more than likely the person found in possession will be arrested.

Most bikes are recovered locally; however, keep in mind that if it has traveled a bit, you will be responsible for going to the recovering agency to claim it. There are also a number of online sites that you can record information about your bike and/or report it stolen if you have the serial number. In that manner, others contemplating the purchase of a used bike have the ability to check the serial number and confirm that it is not stolen. This brings to mind another caveat in the world of stolen bikes.

If it sounds too good to be true, it probably is. In other words, if you are offered a bike for sale at a ridiculous price that you can’t pass up, pass it up. If you are stopped on a stolen bike, you will be questioned by law enforcement as to where you purchased the bike and how much you paid for it. If the price was just too low, you may be arrested as the law assumes that you know the value of a bicycle, and that if said value was in extreme excess of the selling price, you probably should have known that something was amiss.

THE END RESULT
What happens to stolen bikes? Any number of things. Many, especially high-end bikes, are placed online for sale, so it pays to watch online sales/auctions. We arrested a suspect that was stealing high-end bikes and placing them for sale on Craigslist. One theft victim recognized his bike in an ad and actually went to the suspect’s apartment and bought his bike back. He came to us and gave us the information about the bike and reported seeing several other bikes about the apartment. Armed with a search warrant, we went to the suspect’s apartment and recovered approximately 20 stolen bikes.

In another instance, we closed down a homeless encampment along the river and recovered a number of stolen bikes and parts. Many lower-end bikes are stolen to be used for transportation and spare parts by those who can’t drive. Some bikes are stripped of their components, and the parts are placed in online auctions, as most bike parts are not serial numbered.

POLICE AND THIEVES IN THE STREETS
Although some thieves utilize pawn shops to sell bikes, many are reluctant to do so. Pawn shops are required to record serial numbers and the identification of the person presenting an item, and then report the information to local law enforcement. That agency is then responsible for running those serial numbers through NCIC to see if they have been reported stolen. It’s also a good idea to check any social media pages of local law-enforcement agencies. They will often report major busts with recovered stolen property and will feature photos of items that cannot be traced to an owner.

If your bike is recovered and you cannot prove ownership (i.e. serial number), more than likely it will eventually be placed into a law-enforcement auction—although these don’t occur until a sufficient number of bikes and other items are accumulated to place into a sale.

In the meantime, take photos of your bike, record the serial number, invest in a good theft-deterrent lock and keep riding.