ALL OF THE BEST MODERN SADDLE TECH FOR $100, SAGE BECCUS SADDLE REVIEW

From titanium tubes to rails 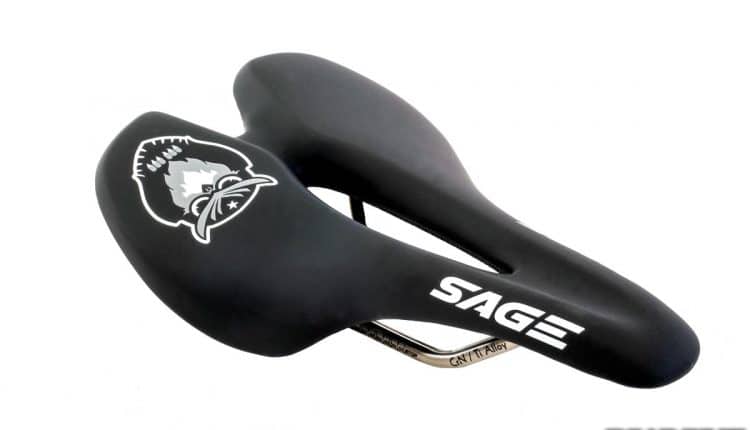 Sage Titanium is a start-up titanium bike brand that got its Oregon-based start back in 2012. Most recently, founder David Rosen made inroads in the accessory market with the Beccus saddle, and of course it features the brand’s namesake material.

Using their working knowledge of metal, the crew at Sage designed the Beccus from the rails up. The standard-sized 7x7mm titanium rails are friendly to the majority of seatpost heads and allow the base of the saddle to damp frame vibrations while still maintaining efficient power transfer through the frame.

A thick layer of foam covers the composite mold with a cut-out center. The mold offers an added point of flex for more vibration reduction and pressure relief, while the foam material forms to the rider’s sit bones. The combination of the central cutout and the short nose creates less pressure on a rider’s perineum when tucked into the drops or in an aero position, encouraging more time spent in both of these efficient positions.

Less material means less weight, and our scales tipped to 250 grams for the Sage saddle. While not the lightest saddle, it is an impressive value at only $100. Like most other snub-nose saddles, the Beccus is under 250mm long, it is 245mm from end to end, and is available in either 143mm or 155mm widths.

Ironically, finding a seatpost clamp to install the Sage on took some effort since all of the bikes in the RBA stable at the time used the oversized 7x9mm option. However, once we found a personal bike with the proper seatpost for the test, off we went. When installing the saddle, we measured the offset up the widest part of each to achieve as close to the same sit-bone position from the cranks as possible.

On our first few rides, the Beccus was noticeably more cushioned than the Selle Italia F30c that has been previously touted for its cushiness. The Beccus has a similar pad density to the Fizik Arione, but the Beccus was more forgiving than the Arione over rough pavement, thanks to the cut-out and the flex from the composite mold.

During rides of more than four hours, our test riders noticed they were able to ride longer with less discomfort and numbness, another benefit of the central cutout.

Hard, prolonged efforts in the drops are more comfortable due to the reduced pressure on the perineum. Our local 90-minute crit felt like it went by with less time spent adjusting the goods and with more time spent comfortably in the drops, plus at $100, we weren’t worried about having to replace the Beccus in the event of a crash.

Sage got it right with the Beccus. Its trendy snub nose and pressure-relieving cutout used in conjunction with the titanium rails combine for a short saddle that can’t be beaten for the price. If you prefer a stiff or dense saddle, the Beccus may not be for you, but during all-day excursions and in high-performance situations, it gets the job done.