Bontrager brings hype and hope to what we all need most

THE NEW WAVE IN HEAD PROTECTION

“On March 19 we’re unveiling something that will change cycling forever.”

So said a Bontrager WaveCel helmet press release that caught the cycling world’s attention like few other releases have done of late. And on the slated day, Bontrager hosted a handful of journos in New York to present a new line of Bontrager helmets that feature a proprietary technology dubbed WaveCel that is claimed to better prevent concussions than standard helmets that use the traditional EPS (expanded polystyrene) material.

For years, helmet test standards have been based only on vertical drop tests. That started to change when doctors and engineers began to study the damaging effects on the brain that results from the rotational forces of angular impacts. At the heart of Bontrager’s “forever change” is a proprietary, collapsible cellular (aka honeycomb) material 15 years in the making for the purposeful objective of mitigating the effect of those rotational motion forces. 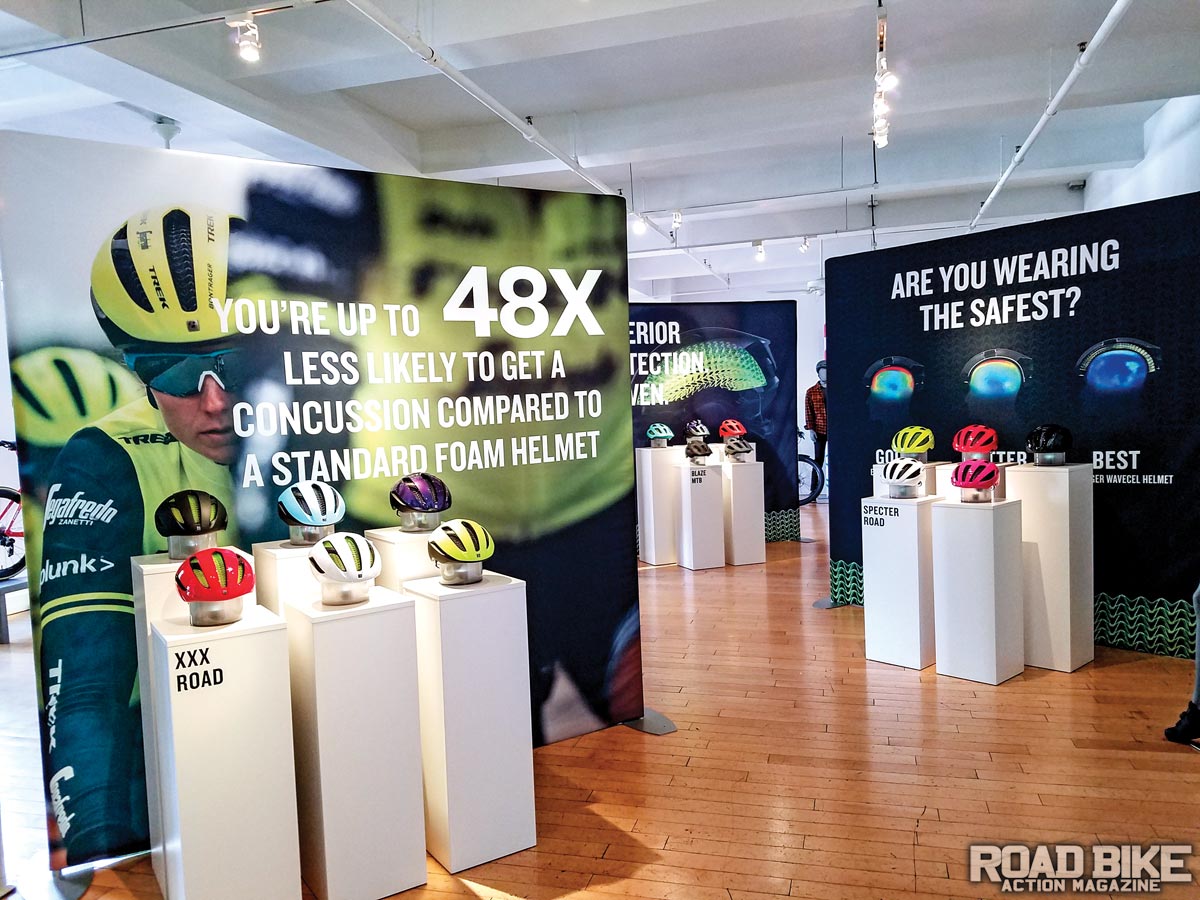 In this endeavor, Bontrager is certainly not the first to try. Without a doubt, it was the slip technology of the MIPS (Multi-Directional Impact Protection System) that got the helmet industry to begin addressing the problem. The idea behind MIPS was the placement of a thin, plastic sheet resting between the top of the cyclist’s head and the EPS liner that would provide between10–15mm of slip (or slide) upon impact.

In addition to a wide variety of helmets that have licensed the MIPS design, there is also a growing number of helmet makers (e.g., 6D, Kali, Shred) who have devised their own active systems to minimize the type of
brain injury that can result with a non-slip helmet.

Of them all, 6D’s ODS (Omni-Directional Suspension) system is probably the most active in that its proprietary design uses multiple hour-glass-shaped elastomeric isolation dampers to provide three-dimensional displacement to minimize the effect of rotational forces from oblique impacts. Where MIPS launched with the cycling market, 6D’s ODS was first used for motocross helmets followed by a mountain bike version with a road bike helmet to come later this year.

Although Bontrager continues to sell helmets with MIPS, the WaveCel helmets will definitely be their main focus moving forward. Initially the line-up consists of four models, which includes two road, one mountain and one commuter helmet.

In addition to the full line of helmets on display, Bontrager’s New York launch included the two doctors responsible for WaceCel—Dr. Steve Madey (orthopedic surgeon) and Dr. Michael Bottlang (biomechanical engineer)—who, as a pair, respectively come across as a less comedic but no less entertaining version of a comedy team in the vein of Penn & Teller. Best of all, they didn’t rely on the age-old farce of wearing lab coats to impress the crowd.

“Versus the slip action of competing designs, the WaveCel honeycomb is designed to instead flex, crumple and glide in the first few milliseconds after impact to disperse the injurious rotational forces.”

While the two doctors met years ago at the University of Iowa, where they began their work on a variety of medical studies and devices, they have been partnered with Bontrager for the last four years.

The key feature to WaveCel’s protective technology is the three-step change in the honeycomb material structure upon impact. Versus the slip action of competing designs, the WaveCel honeycomb is designed to instead flex, crumple and glide in the first few milliseconds after impact to disperse the injurious rotational forces.

To back up their claims that WaveCel is 48 times more effective at preventing concussions over a helmet using standard EPS foam, the doctors were also happy to tout a five-star rating from the independent test lab at Virginia Tech.

However, if there was one lab result missing in the presentation, it was anything that spoke directly to ventilation. While the air ports are large and there is a discernible gap that runs between the top of the WaveCel surface and bottom of the EPS liner, the WaveCel structure would definitely act to inhibit airflow. As opposed to any hard data, all we were told was that on similar bike rides with different helmets worn, there was no noticeable difference in heat buildup. Hardly scientific.

When asked if the pro riders on the Segafredo team would be using the helmets during the notoriously hot summer days in France, we were told that the riders were free to run whichever helmet they wanted.

Has the introduction of WaveCel technology “changed cycling forever”? While it may bring change to Bontrager’s helmet sales, to the whole of cycling itself, no. Still, any advance in upping the protection game is a good thing, and if WaveCel can contribute to that, it’s a good thing.

Bontrager’s pre-launch hype of their new WaveCel helmet technology was unmatched and easily qualified as one of the bike industry’s most recent (over-) hyped new-product roll-outs. Certainly, while any step forward in improving the safety of cyclists is laudable, the PR run-up to the helmet’s actual launch had set cyclists’ keyboards ablaze.

Thankfully, that initial claim was given some shade when the press release narrowed the focus to instead calling the new design “the biggest advance in helmets in over 30 years.”

While we are more than happy to cheer on any advance in improved safety, to date, we think the biggest innovation to ever come out of the Trek factory has been the OCLV carbon technology they created back in 1992. To that we would even add their IsoSpeed suspension used on the Domane bikes.

In the days leading up to the big reveal, we hosted a contest where everyone could chime in what they thought would be the new product that would “change cycling forever.” Here’s some of the best. 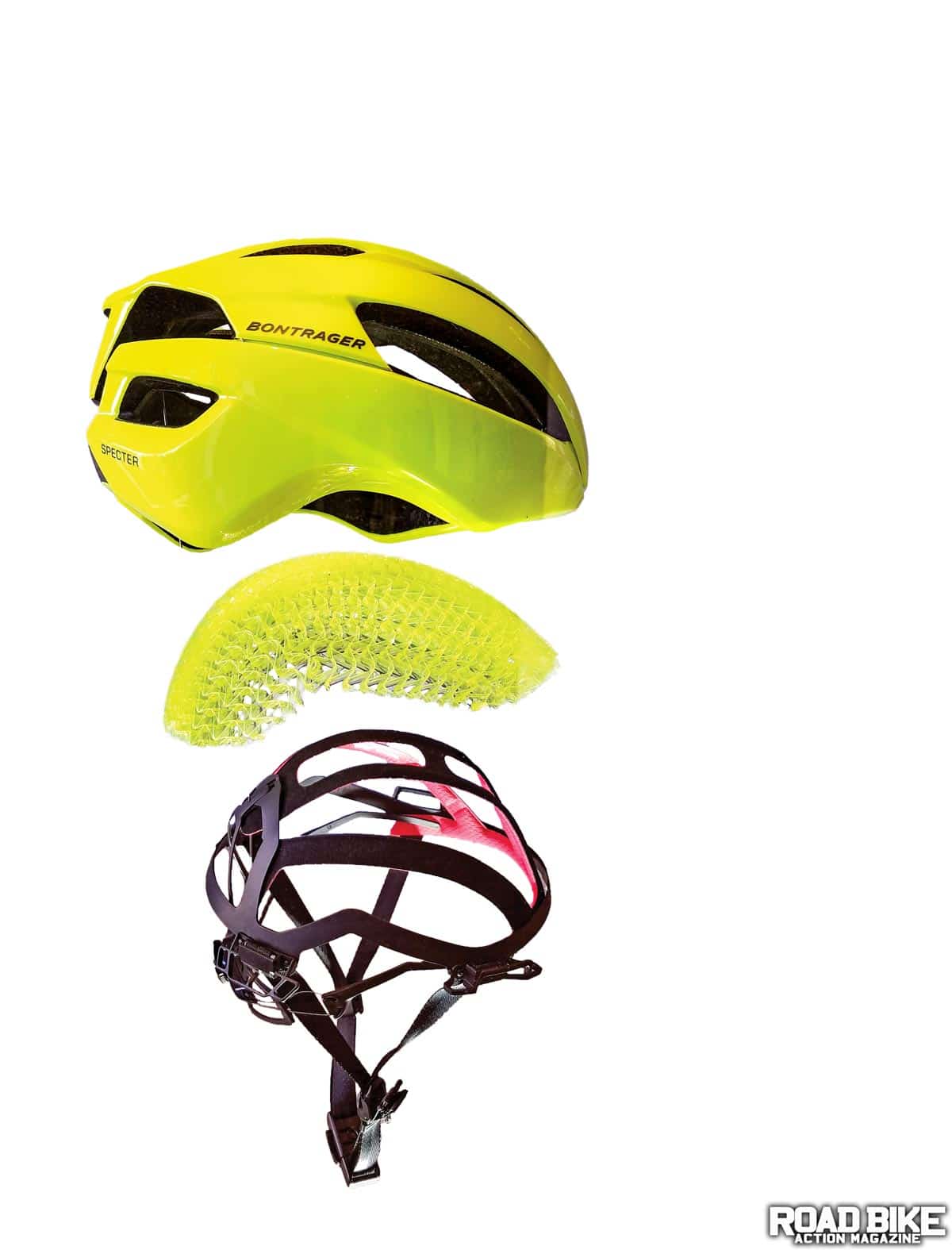 • My money is on Spider silk fiber for Trek’s new road bike. It’s an amazing material, flexes without losing shape or compromising strength. With the DNA splicing of goats and spiders, we can strain the silk out of the goat’s milk. It’s lighter and stronger than steel, and I think will be the biggest advancement in cycling since carbon.

• Autonomous gyroscopic generators to counter the forces of gravitational pulls to prevent crashing as mandated by the UCI to prevent those nasty crashes plaguing the Grand Tours.

• It’s got two wheels! It’s got a frame! It’s even got a groupset and finishing kit! Amazing! It’s just so different! It’s even painted black and red! Wow!!!

• A one-piece bike. Frame, stem, bars, crank, wheels, tires—everything is one piece. It only goes straight, and
it just skids down the road, but it’s really light!

• The bike is actually a transformer named “Madonatron.”

• That looks faster than the wife blowing up about buying another bike.

• It will change cycling forever? It would have to be something fundamental, like pedaling with your teeth.

• On the one hand, I’m optimistic enough to hope it’s something I wouldn’t have thought of and end up pleasantly surprised. On the other hand, I’m also just cynical enough that should the release be just sales hype, I’ll roll my eyes and say, “That figures.”

• Back to the future—a new, lightweight steel frame.

• It comes with a customizable android to hang out with your kids while you’re on it so they don’t miss ya!

• An aero-electric abomination made from gossamer, silk and whatever Thor’s hammer is made from, and it weighs 14.1 pounds soaking wet. Did I forget that it has WiFi as well?

• Two seats and one pedal.

• Sorry but my Kask Cycling Protone helmets are far better-looking than these ugly things and totally fine with regards to safety.

• Huge fail, and I’m at least happy that I don’t have to keep reading about the hype that Trek has tried to raise around this helmet.

Go back to trying to make a bike that doesn’t look hideous, you guys will be far better off.

If the performance data presented by Bontrager is true, then it definitely is a major improvement over the improved MIPS design.

• Yeah, how is this different from the honeycomb in the Smith helmets? New technology? In what way?

• In the spirit of not making a negative comment, comparing the tease to, say, my ex-wife, I will just say this—vomiting emoticon. 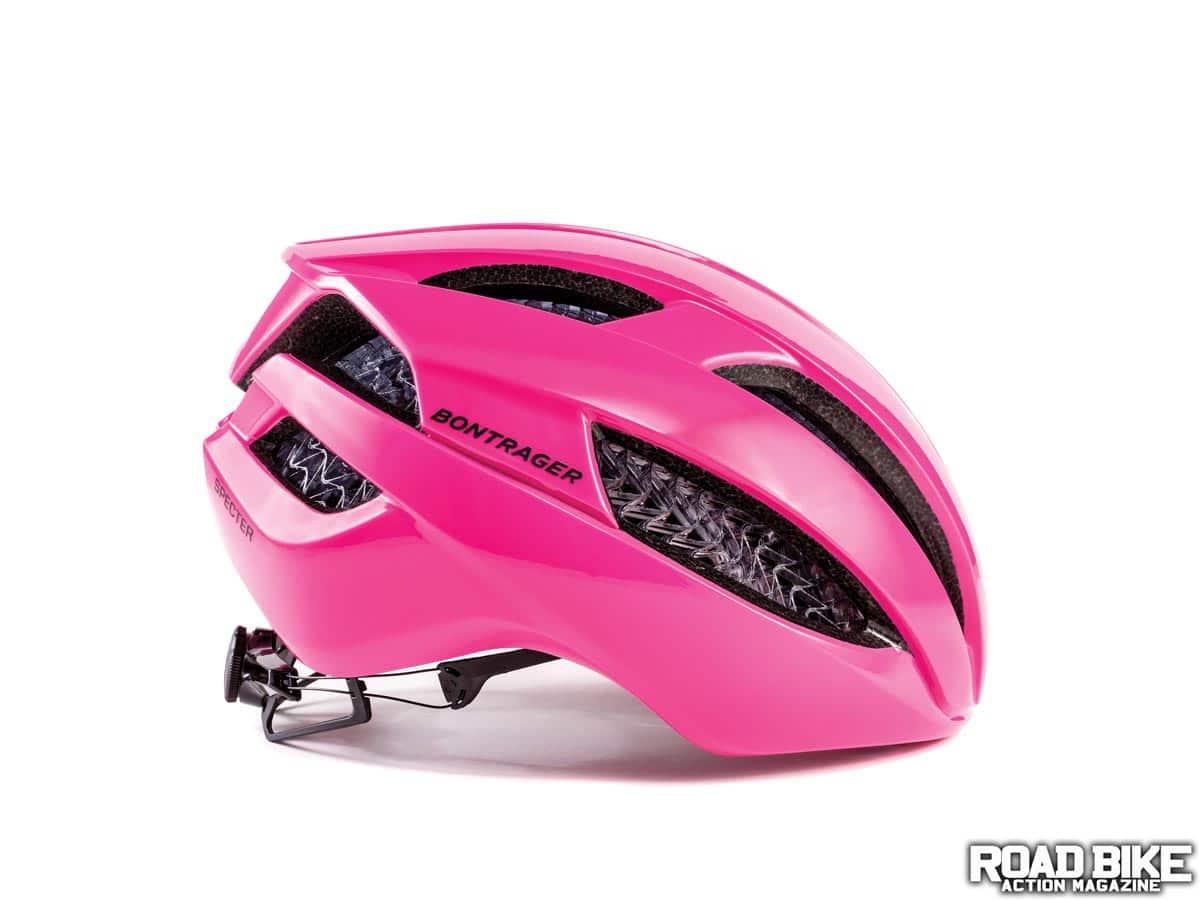 So how does the Bontrager helmet ride?

As explained on the previous pages, Bontrager has introduced a new family of helmets designed specifically to mitigate the impact of angular acceleration on a cyclist’s brain in the event of a crash.

Available in five colors and three sizes, the Specter enjoys some nice details that help enhance the attraction of its lower price point. While both helmets use the same Boa retention dial on the back, the Specter uses the high-end magnetic FidLock buckle. Ironically, as much attention to safety as Bontrager touts with the WaveCel material, the “reflective elements” listed is comprised of just a small, largely ineffective patch.

Speaking of weight, we weighed two other Bonti lids with MIPS to compare with the Specter. The Bontrager Starvos was 284 grams, and the Circuit weighed 301 grams. Going outside the family tree, a Smith Overtake (that uses a similar protective honeycomb) weighed 273 grams and a standard EPS Kask Mojito weighed just 213 grams.

Trek cites a hefty 58-gram difference between the small- and large-size Specter.

Owing the added WaveCel material, the Specter also measured half-an-inch wider from edge to edge than the similarly priced Circuit.

Like shoes and saddles, when it comes to judging helmet comfort, the verdict can be entirely subjective depending on any one rider’s head shape. One rider could never get the rear retention structure to not dig into the back of his head. For another rider, the Specter was just as comfortable as their personal helmet.

The three drawbacks that are commonly associated with adding an extra layer of impact protection are as follows: an increase in weight, an increase in the helmet’s outer proportions and decreased ventilation. While the Specter can check each one of these boxes, it was only the weight that first drew notice, and later, more than halfway through a four-hour ride, complaint. 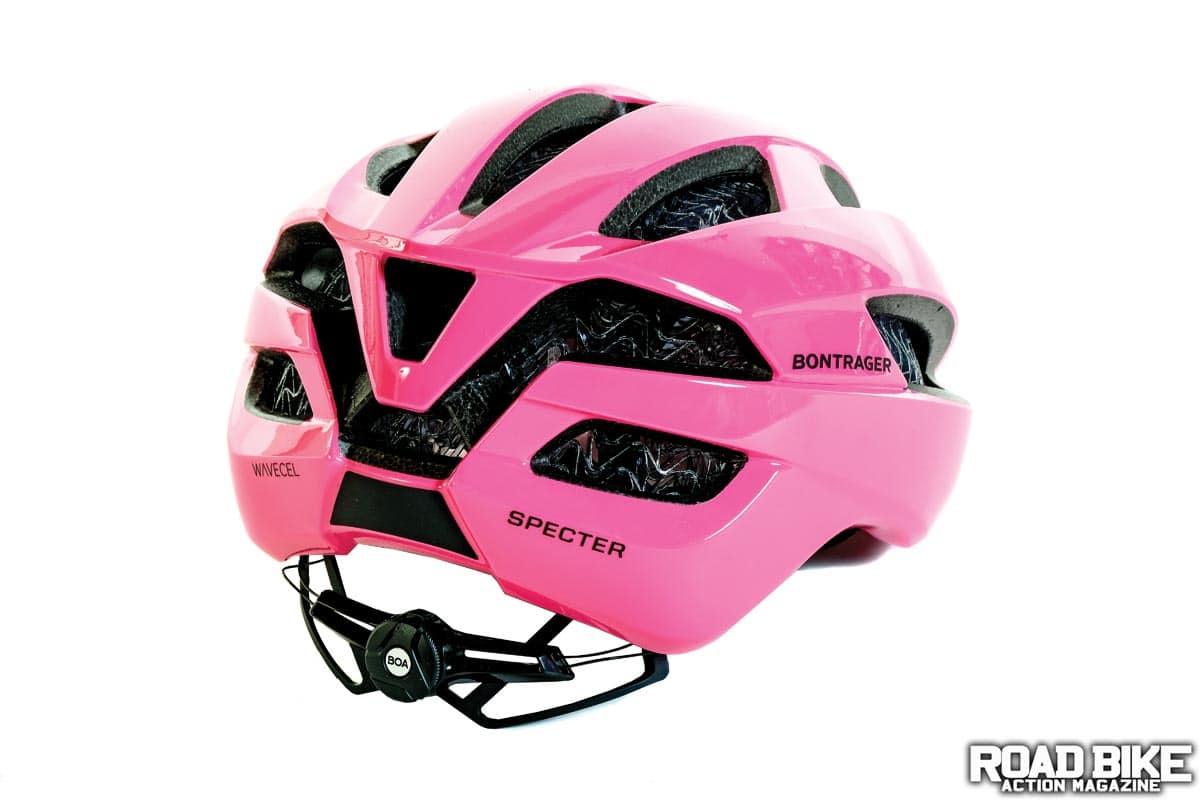 While the WaveCel never felt as breezy as some other brands, it also never felt oppressively hot—that is, on the road where we would average 18–24 mph. When it came time for a long, slow-speed fire-road climb on a gravel bike, things got rather toasty upstairs.

Although some riders likened the WaveCel material to a potential cheese grater on the scalp due to its close proximity, we never felt any sharp edges in spite of the minimally thick pads.

As much as Bontrager can be accused of over-hyping the arrival of the WaveCel, the introduction of new product that brings a higher level of safety and protection for cyclists should be applauded.

Of the two WaveCel choices, we’d choose the Specter and use the leftover money to go out for a nice dinner after
our ride.

Tweet of the Day: Throwback to Peter Sagan Winning in Richmond