A cycling computer for this century 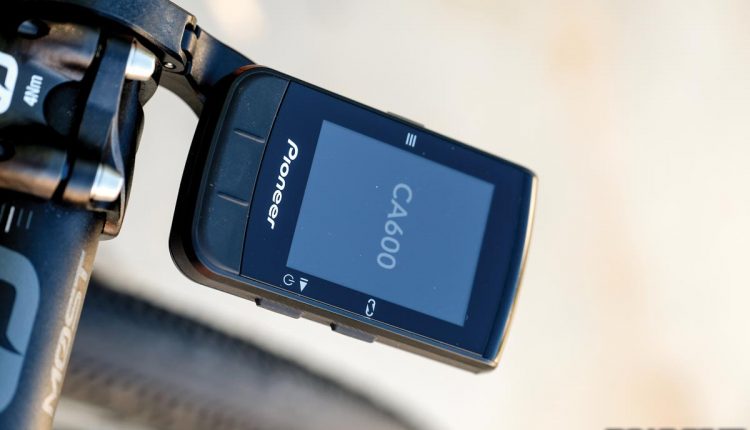 Pioneer’s SGX-CA600 is ready for its close-up

Though not as well-known as other brands, Pioneer Electronics has had a cycling division since 2013 when they launched their Shimano 7900-series-based power meter and SGX-CA900 computer. The CA900 was shortly followed by the SGX-CA500.  Since Pioneer’s impressive technology and level of data offered was only able to be captured by using their head unit, many potential customers were locked out of the equation—until now.

Pioneer’s new SGX-CA600 not only looks to address issues that Pioneer power meter users had with the old unit but are now an option for a wider audience. A completely new interface and user experience are now matched to a modern design that cyclists of all levels can appreciate.

The 92-gram CA600 computer has a 2.2-inch color display with a 5 x 8.8 x 1.6cm outside dimension. The screen is navigated using the three large buttons across the lower front of the unit, as well as the three side buttons. The CA600 is liquid- and dust-proof with an IP66/IP68 rating. It uses a quarter-turn mount system, which makes for easy mounting to the supplied handlebar mount, as well as easy adaptation to the vast number of aftermarket mounts.

For connections, the CA600 uses a micro-USB port to charge, as well as a hard-line connection to a computer. The cycling computer also has GPS, Wi-Fi, Bluetooth and ANT+. The rechargeable lithium-Ion battery has an average lifespan of around 10 1/2 hours with all features on and could probably be extended a few more if some of the settings were optimized correctly. From a completely flat state, the battery takes about five hours to charge.

Thanks to the addition of Bluetooth and the new Pioneer Control app, the CA600 can now connect to mobile devices. This makes setup and customization much quicker. The computer can also be set up straight through the head unit, but some of the advanced connections still require the app. 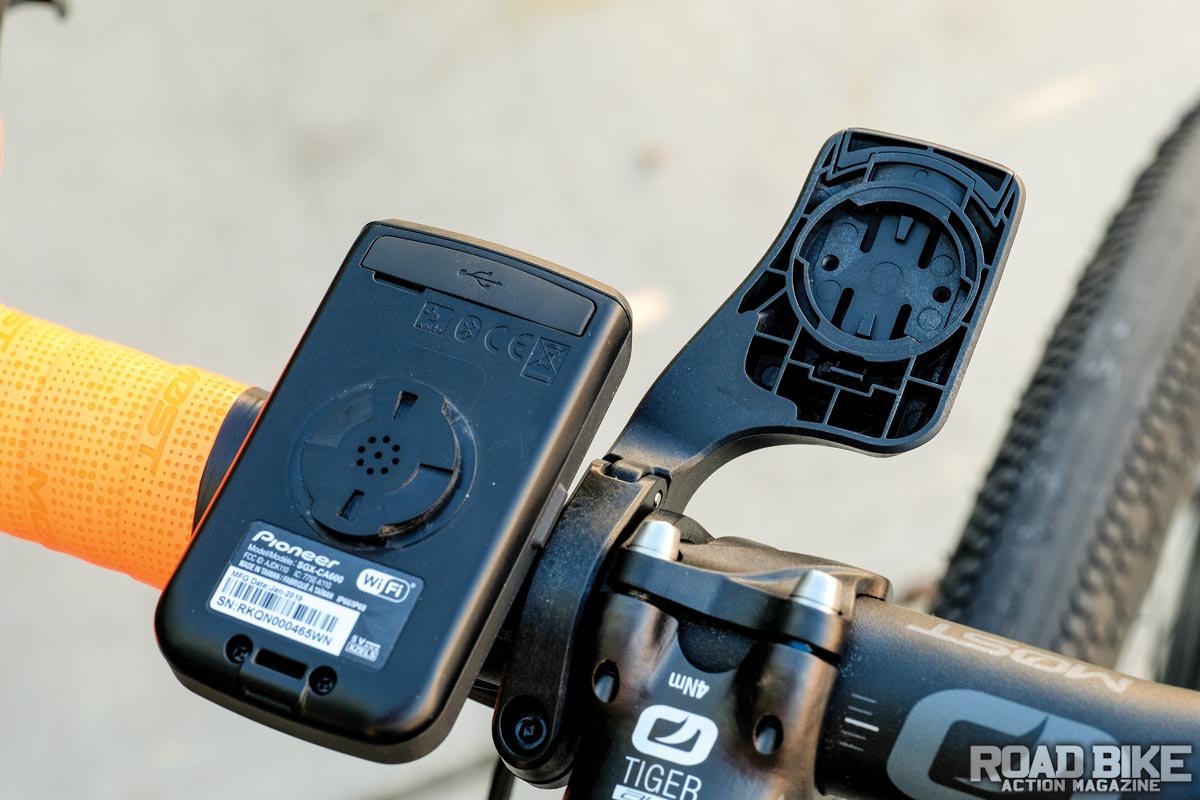 While a lot has changed from the older units, one of the biggest additions is courses and the use of OpenStreetMap. This allows you to upload turn-by-turn Fit or TCX course files and Ridewithgps, Strava and Easyroute are all compatible, along with many others (Strava routes currently do not offer turn-by-turn navigation).  Another neat feature is the ability to simulate a course while using a smart trainer. This means that while training indoors you can simulate your favorite route or maybe an upcoming race without the need for any additional software or hardware.

Pioneer is still very training-oriented and maintains their training menu. This allows users to run timed intervals and other training tests to help optimize fitness and progress. The main menu also has a calibrate menu that is used exclusively for their power meters that are set to pedal monitoring and calibrate their advanced Tan and Rad strain gauges in the power meter, as well as check battery levels.

For setup, we tried both the app-based version on our mobile phone, as well as doing it all on the unit itself. The app-based method was very easy to use and walked us through the entire process. This method was also convenient, because we were able to set up our computer to communicate with Strava, Ridewithgps, Cyclo-Sphere (Pioneer’s pedal monitoring software used to analyze their advanced vector data) and our Wi-Fi.

Pioneer offers 10 default screens that can be customized to your preference. They have over 100 suggested layouts to make the process even quicker. The app also makes easy work of connecting other sensors, like heart rate monitors, cadence sensors, speed sensor and power meters of all brands. As long as it’s ANT+ or Bluetooth compatible, the CA600 can connect.

One thing that is still a bit old school is the use of bikes to define the sensor you want to connect to. This means if you own more than one bike, you need to set them up separately. It also means that you will have to sync your heart rate monitor to each bike. You can have up to six bikes with an auto-select feature, and for most people that is more than enough. We had initially set up one bike, then a few days later another, but not added our heart rate monitor to the second bike profile. Before our ride on the second bike, we spent a few minutes digging through the on-screen menu trying to figure out why our data field was empty.

If you use a power meter, the CA600 offers all the data fields you could want, and if you use a Pioneer power meter with pedal monitoring, you get a whole lot more.

On the road, the Pioneer CA600 works like most other cycling computers. It uses GPS to log your ride and display general stats about your ride. The display is simple and easy to read in almost any light with minimal glare. Switching between screens is easy enough using the large front buttons on either side. The center button is used to zoom in on a particular field, and in our opinion is a complete waste. If you do use it to zoom, it goes back to displaying all the fields again after about two seconds. It would be better used if it maintained the enlarged display or could be swapped to a lap button.

Stiff to push, the lap button is on the right side near the center point on the computer, and on more than a few occasions we pressed it a bit too high and rotated the computer in the mount. While this rotation could lead to it falling off the mount, after a few rides it did get a bit more intuitive.

The courses are very easy to navigate with a simple display lacking the overwhelming options that many cycling computers are now implementing. We found that the more simple the maps and display lead to fewer missed turns. While many of today’s cycling computers try to imitate that mapping of a mobile phone by changing views as needed, the CA600 seems to be a great balance.

During our setup we changed around most of our screens and data fields. This was great until one of our Strava segments popped up. We had moved our live segment page to #5; meaning to get back to our primary screen (#1), we had to manually flip past a few pages. If you have Strava linked, the CA600 downloads your starred segments and allows you to live track your progress over the length of the segment.

This is fun and a good way to motivate yourself during a ride, but there is no dismiss button allowing you to ignore a segment. The CA600 also uses some sort of general GPS location to display the upcoming segments, because we would also get a heads up for segments that were in the opposite direction as we were traveling. Pioneer knows about this, and from the sounds of it, they might have an update coming soon.

Pioneer is also offering a very unique and innovative feature that we haven’t seen in any other cycling computers. When the head unit is connected to the Control app, it will gather live wind data and use that information to offer feedback on your aerodynamic efficiency as well as their data. This feedback relies heavily on properly entered rider and bike data as well as a power meter. If you don’t have a power meter, it can offer you a virtual power number. Obviously, this is nowhere near as accurate as actually using a strain gauge, but is a nice feature for those interested in getting a power meter.

While we test a lot of cycling computers, most of the RBA crew have gravitated to Wahoo or Bryton lately. One thing both of those brands are missing is the ability to automatically mark a lap by GPS location. This is a very useful feature when doing intervals or testing at our favorite summer training ride where we do 10 laps on a 3.1-mile loop.

Once a ride has ended, the start/stop button is used to save the ride. If you are within range of a Wi-Fi signal that is programmed into the computer it uploads automatically. Otherwise, you can use the Bluetooth function with the Pioneer Control app to upload the ride file as well. Both ways are quick and easy with very little added time or
effort needed.

When it’s all said and done, Pioneer has come a long way with the SGX-CA600. Not only have they fixed all of the faults of their original computers, they have delivered a product that anyone would be happy to use. While the previous models were only used by Pioneer power meter customers, with this new model they can now reach the rest of the market.

While companies like Garmin, Wahoo and Bryton have been offering computers of this level for some time, the Pioneer is still the best match when it comes to power training with a Pioneer power meter or any other power meter for that matter.

The app seems to work well and was easier to use than many of the other brands. It had no issues when new phone updates were released, either. The back end of the Pioneer is still packed with power, but now it’s easy to use. It’s definitely targeted for the performance-oriented rider, but simple enough for a casual rider. If you have ever considered training or riding with a power meter, then the Pioneer CA600 would be a top contender when choosing a head unit.

• Pioneer for the masses

• Maps and a colored screen