The reinvention of a history maker 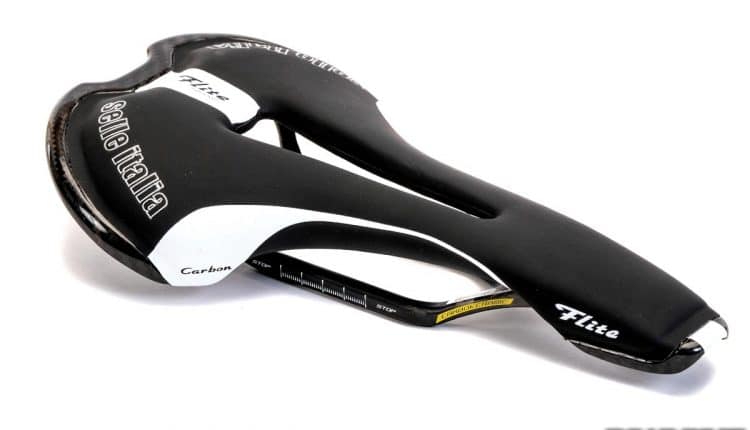 Quick history lesson here: although Selle Italia has been making saddles for over 120 years, it was in 1991 that the brand scored perhaps its biggest marketing triumph with the introduction of the Flite. With much of the base cut-away and its use of titanium rails, the Flite was a lesson in minimalism and performance that the saddle market had yet to discover. The Flite was a huge hit with racers and weight geeks alike, and ushered in an industry-wide rethink of how a saddle could be designed.

No, the new Selle Italia does not have a leather cover as found on the original, but we’re guessing the modern microfiber cover material should work wonders in providing both added durability and light weight. The tail of the saddle has an exposed edge from the carbon fiber base that adds an appreciated visual touch, but care should be given on what the saddle is leaned against to avoid nicks.

Another more contemporary design feature is the ceramic-coated, oversized 7x9mm carbon rails that will require a seatpost clamp made for the size.

In contrast to the new trend of short saddles (RBA, April 2019), the Flite Tekno Flow maintains a more traditional 145mm length. It also has an anatomic cutout for added comfort and relief.

Over the years Selle Italia has invested heavily in a range of studies looking at both saddle sizing and fit. They currently offer six different sizes of saddles that speak to width and cutout dimension. Our saddle was an L1, which indicates a wide saddle with a narrow cutout.

As we’ve recently been making the rounds with a variety of new saddle designs, the first thing we noticed about the Flite is that it is stiff, which can be attributed to the carbon base/rail combo. This is a minimally padded saddle, and when combined with the notable stiffness, it definitely rates as a performance-oriented saddle. As personal a feature as all saddles are to the rider, the Flite is distinguished with a flatter seating surface.

No, this saddle doesn’t have a lot in common with the original. But owing to the changes, it’s also lost about 100 grams of weight, which remains a significant asset for many roadies out there.

Whether the Flite is or isn’t fit for a king, we’ll leave that choice for a king to decide, but it is definitely priced for one. Doling out $450 for a saddle is assuredly a big ask, but like so many other high-end legacy products, the made-in-Italy Selle Italia Flite is not intended for the average rider. However, with seven different versions available, starting with the $109, 240-gram Flite TM, the Italian brand is making good on the effort to spread the model around.

• A price fit for a king

• One of seven versions