Sidi’s pedigree without the price 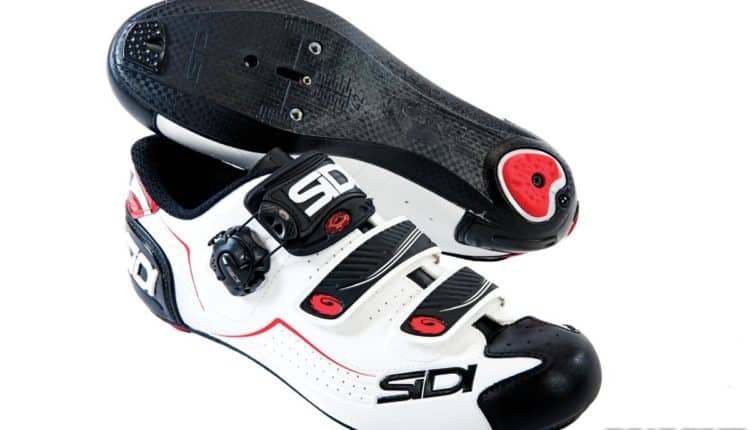 For over four decades Sidi has cobbled together a legacy as the cycling world’s most venerable shoemaker. From developing their own technologies to enjoying a string of unparalleled race wins, Sidi is to cycling what Nike is to basketball.

Beyond the renowned quality and design, Sidi has also become well known for the tall asking price of their high-end shoes, like the Tour de France winning Shot model that sells for over $500. Since the majority of cyclists don’t plan on laying down that kind of money for new shoes, we decided to see what the Sidi brand had on offer at a more entry-level price. Enter the new Alba, which retails for $199.

Despite its use of two old-school Velcro straps, at first glance the Alba looks every bit the performance-oriented shoe as any Sidi costing two to three times more. In addition to the straps, the Alba uses one of Sidi’s Tecno 3 dial closures to cinch the shoe down. Standout details for this price point include the overall sturdy construction that’s best evidenced by the built-up heel cup and reinforced toe box. Having a replaceable heel pad is also a noteworthy addition. Though not as fancy as the higher-priced models, the Alba also features a carbon composite sole.

Beyond the 15 perforated holes located on the interior side of the synthetic Politex upper, there isn’t a lot of ventilation. We were pleasantly surprised to find a comfortably wide insole, which normally is an uncommon attribute with many Italian brands. No, Sidi’s own Tecno 3 dial is not as brain-dead easy to use as a Boa, but it’s still an efficient gadget that features micro-adjustments and an easy release. The dial is hard to fidget with when using long-fingered gloves, and just as we’ve complained about in the past, it would be a handy improvement if they used a competing color on the dial’s all-black surface to better accentuate the flip-up tab used to make mid-ride adjustments.

Just as many an Italian purist took a blow with the reality that Pinarello frames are all made in China, although these shoes speak Italian, they are made in Romania to help make the $200 price possible. To that we have two words—so what? The Alba proved to be a solid shoe with enough Sidi styling and design features to make it a great shoe for the majority of riders on the road. No, it’s not as stiff as a Chris Froome replica Shot model, but for most of us, that’s a good thing. The Alba is available in a whopping 24 different sizes, and four colors for men and three colors in women’s sizes.

Froome Will Not Start 2019 in Europe