When old school is new school 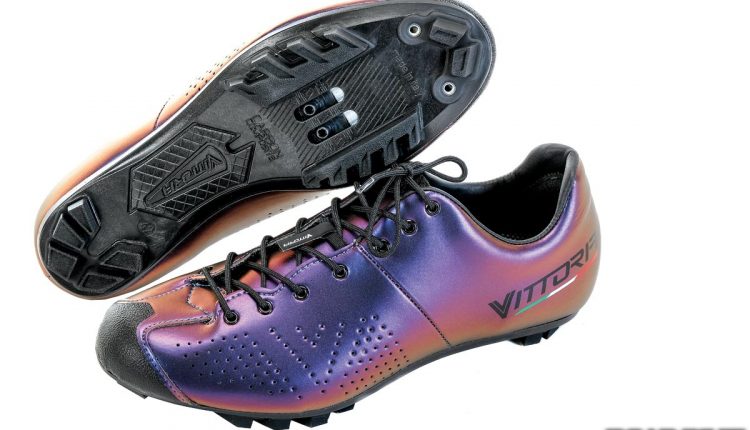 Hand-making cycling shoes in their 1,000-square-meter facility in Vigliano Biellese, Italy, since 1976, Vittoria has entered the gravel shoe game. Their latest release, dubbed the Tierra (Spanish for “Earth”), is a modern replica of the old-school lace-up shoes that the brand originally gained fame for, but with a modern, gravel-focused sole and upper.

Vittoria opted for a microfiber upper with minimal stitching for maximum water protection to better tackle water crossings and wet rides. They claim the upper is impermeable to water and mud, but in turn is still breathable due to the multitude of vents on each side of the shoe. The upper is coated in a chameleon-like purple to green color fade, which was a favorite of many of the riders we passed on the road. A vulcanized rubber toe cover adds an extra layer of protection for the rough roads.

A carbon composite sole acts as the base, and a rubber tread lines each side of the cleat and protects the heel as well. However, the arch of the sole is bare. On the road this caused us to slip if we missed our cleat when we tried clipping in.

When gearing up we noticed the laces were fit relatively short, which gives the Tierra a clean look on the road. On our first few rides we left the shoes looser than normal to allow them to break in without the need to constantly stop and readjust the laces mid-ride. Once formed to the rider’s foot and broken in, the Tierras are easy to secure at an ideal tightness. We like laces on gravel shoes for their simplicity and durability. When Boas may start to seize from all the mud and debris, laces keep doing their job.

On warm rides we noticed how breathable the upper material is. The water-impermeable upper still allows heat to escape; however, in the rain we noticed our socks absorbed water, and we ended up with soaked feet.

After extended use, the soft rubber tread began to wear. We did a fair amount of hike-a-bike in the Tierras, so the results were to be expected. Fortunately, the sole remained relatively unscathed, and the upper material has stood up without a scratch.

The one thing that we missed was a grippier rubber patch on the center of the sole, which is found on their mountain bike shoe. When clipping in, the lack of a platform on gravel pedals and the smaller cleat increases the chance of missing the clip-in. Most off-road shoes have a rubber hot patch to add some traction on the sole; instead, when we missed a clip-in with the Tierras, we would end up fumbling to get clipped in and hitting our shins on the pedals.

Vittoria’s Tierras are designed to get you through your longest days in the saddle. The laces give the Tierras an added sense of utility, while the upper is durable enough to stay in one piece over the rough stuff. Toe spikes are included with the shoes, but they aren’t necessary for us and just add to the overall bang-for-the-buck. The price makes the Tierras a solid value when compared to many other exorbitantly priced shoes. All in all, the Tierras are a solid pair of workhorse shoes that, while being on the low-tech side, still come away with plenty of colorful Italian flair.