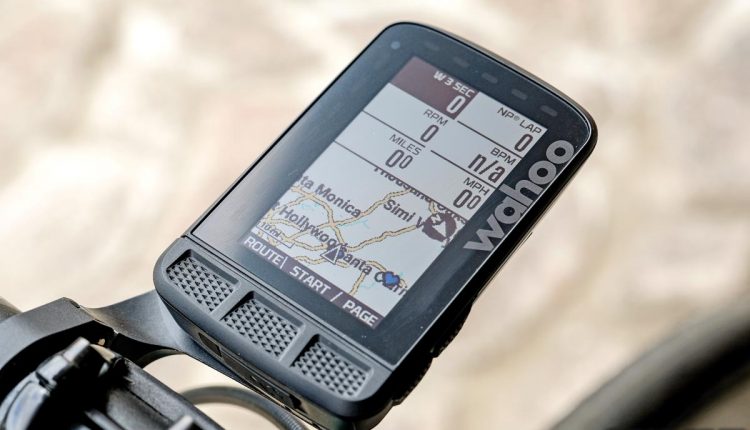 Wahoo has been taking the cycling market by storm with their line of trainers and trainer accessories that have revolutionized the stationary cycling experience. These trainers have elevated the indoor experience for cyclists of all levels and abilities.

However, one of their biggest interruptions to the market has been in the GPS computer segment where they’ve truly rethought the user experience. Their latest release, the Elemnt Roam, will take the place as the flagship cycling computer and bump the original Elemnt out of production. With the Roam, they seamlessly integrated the smartphone and head unit, allowing users to bypass the need for a laptop or desktop computer to take full advantage of all the features.

The Roam has the same-size 2.7-inch display as the original Elemnt, but that is where the similarities end. It has received some major improvements, as Wahoo has moved the display panel closer to the scratch-resistant display panel and added a satin finish that reduces glare. The new display now adds color, too, but Wahoo utilizes it strategically, still relying on their beloved high contrast.

While the original Elemnt and Bolt could display courses and give turn-by-turn direction, the street names were only available through waypoints. The big news with the Roam is that it has added navigation with base maps.

This upgrade enhances the experience of the new smart navigation features that can automatically route you back onto a planned route when you go off course, create a new route on the fly, or help you find the fastest way home. The navigation page is also where you see the new color display being put to work the most, with bodies of water displaying as blue and other hints of color when navigating a route. 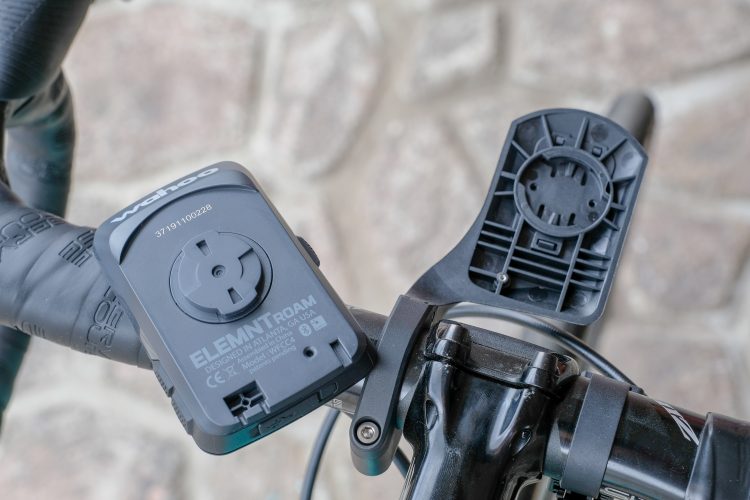 The new Roam maintains the quick-look LEDs that run along the top and left side of the unit. The top bar of
LEDs is for notifications and navigation, while the left bar can be programmed to display speed, power zones or heart-rate zones. The Roam also boasts a whopping 17-plus-hour battery life, thanks to the new type of LEDs used
in the display.

The new shape of the Roam borrows the aero cues first implemented on the Bolt, but to a larger scale. From the center of our bars the Roam extends 12cm, while the smaller Bolt sits at 10cm, both using the supplied out-front aero mount. The Roam is much sleeker than the original Elemnt. For those that have invested in mounts from other brands like K-Edge or Barfly, the Roam will work, but it will lose the cohesive and sleek interface that the stock mount offers. 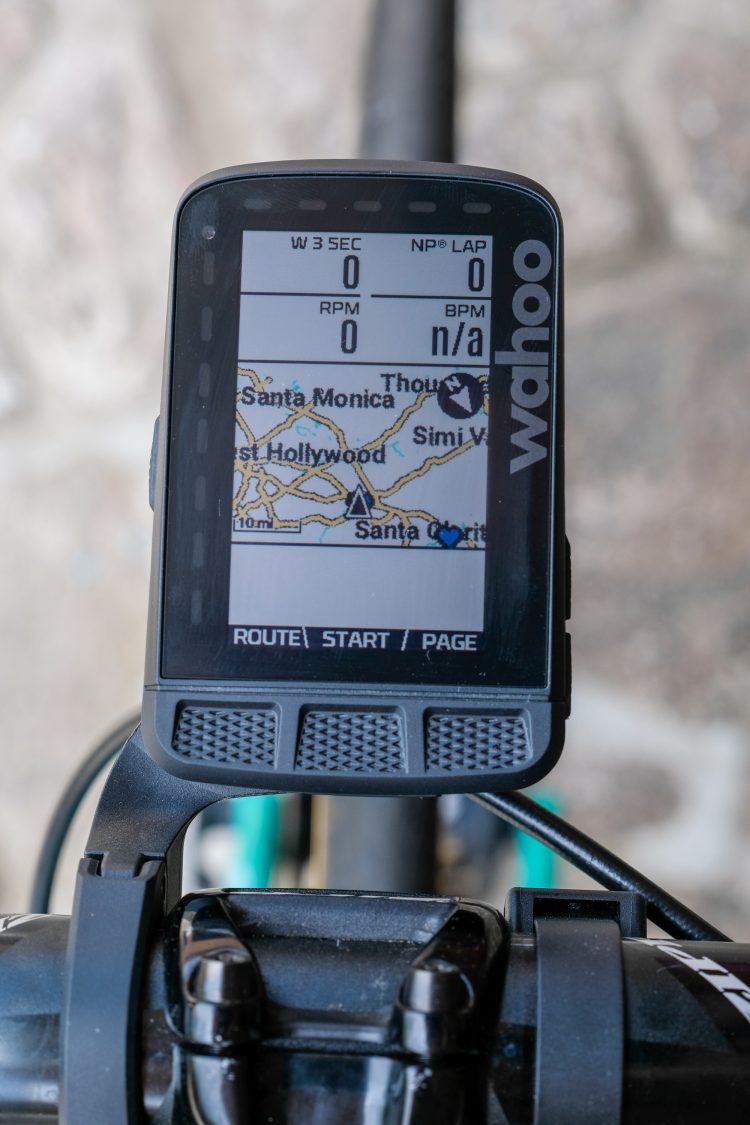 Like all previous Wahoo computers, the setup is done using the Elemnt app. This makes for quick and easy initial setup. The only downside to the system is that if you have set a field that you don’t want and you notice on a ride, you will have to use your phone to make the change, because there is no way to do it on the head unit itself.

On the road, the experience and user interface are just like the rest of the Elemnt line. Menus, page navigation and features are all controlled with the six buttons that also maintain the same homes as previous models. This makes upgrading from a different Wahoo computer seamless, while transitioning from a different brand is still easy since there are no complex menus to sort through.

The improved display makes one of the easiest-to-see screens even easier in all lighting conditions. Sometimes it is the small things that drive us nuts, and on the Bolt, it was the fact that we couldn’t center the computer on a large number of bikes with the stock mount. Even when the Bolt is as close to the stem on the bars, it still does not align in the center. Thanks to the larger size on the Roam, this is less of an issue. There are still a few stems out there that might be a bit off-center, but this is much improved.

Wahoo was very excited about the new light sensor that is very convenient. It is used to automatically change the backlight setting depending on the available light. During our testing, the sensor was so sensitive that the streetlights in the evening were bright enough to kick the backlight off, then moments later it would flick back on. This back-and-forth switching was distracting, and for us, we had to take it out of the auto setting. Luckily, this is also a setting that can be changed without the app directly on the head unit. 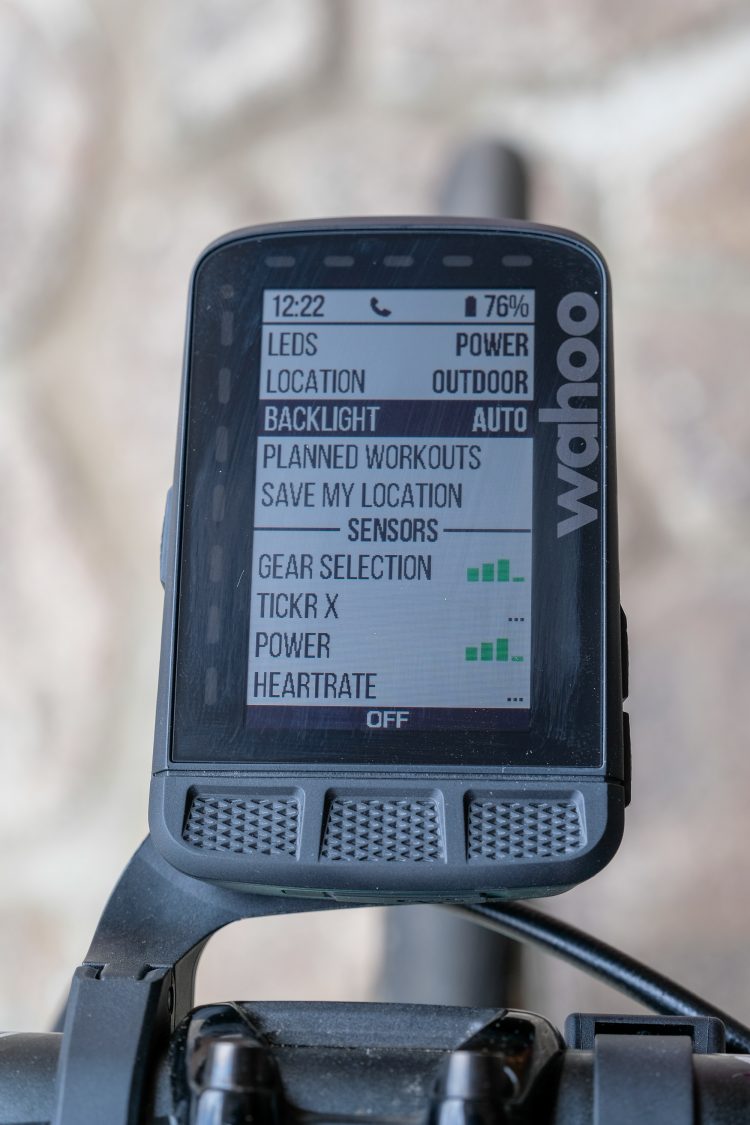 We brought this issue up with the crew at Wahoo, and it seems that they took our advice and have made an update. Now there is a 10-second delay for the backlight to turn off as we recommended. If you ride into a tunnel or through a dark section, the backlight will still come on immediately. If you don’t want the auto setting, we recommend you use the app, and there is a setting for the backlight time to remain on longer. By default it is 5 seconds, but that can be changed. We have ours set to 40 seconds, as it gives us time to analyze data, but not so long that the light is distracting if the surrounding area is very dark.

The new navigation features are easy to use and make for easy navigation in areas you are not familiar with. We took advantage of the “navigate to start” for a route that someone had supplied us while we were traveling. The only problem we have experienced with the navigation are roundabouts. While they are less common in the States, they are found everywhere in Europe, and on all three occasions that we had to navigate one, we were misled.

Remember that the turn-by-turn features in a course are controlled by the file you use, so if it’s not working, then go back to the program you used to make the course and ensure that the waypoints are being saved. We have found that RideWithGPS seems to be the best partner for making courses. We tested the Strava course builder, and it didn’t transmit the turn-by-turn notifications, and Wahoo says they are working on this closely with Strava.

One of the things that we are most excited about on the Roam is the ability to have up to six data fields on the map’s screen at once. We used this during Dirty Kanza so we didn’t have to switch back and forth between pages. While six leaves the map small, we found that four was ideal for us in most other cases. You can also show the elevation profile on this page if needed, but that really starts to minimize the usefulness of the map depending on how many data fields are displayed.

One of the things we love most about the larger screen is the fact that you can run up to 11 data fields. Then, with the right-side buttons, you can zoom in or out. This will allow you to display fewer fields, but they will increase in size. When setting up each page, make sure you prioritize the fields you rely on most at the top, because as you zoom, the ones lowest on the list will be hidden.

We really like the dual quick-look LEDs for a quick glance to see what zone we are in, but they can be hard to see in direct sunlight. The left LEDs can also be quickly changed on the head unit, or you can also resort to the app as well. We noticed that if we took our time to set up the data fields and setting initially, there was almost no need to resort back to the app to make changes.

The Roam can be set up to display call and message notifications when paired to your phone, too. We use this often to screen calls and text messages for importance rather than reaching for our phone on every buzz.

If you use a power meter, the Roam takes advantage of the update that pairs it with Pioneer’s advanced metrics just like the rest of the line. Our only complaint on all the Wahoo computers when it comes to power is that when you want to calibrate from the head unit, we always hit the “forget” sensor button. This can be a pain if you are surrounded by a lot of other sensors when you are trying to re-pair, and there is also no notification that ensures you wanted to forget the sensor.

Since the Roam uses more detailed maps, it can’t save them all internally. If you are traveling to a different state or country, make sure to download that region’s maps while you have strong Wi-Fi. The files are large, and we noticed that shared internet systems like those used in hotels struggled with the task.

Overall, the new Wahoo Roam is a solid upgrade from the original Elemnt, and making the transition is easy. We still swap between the Bolt and Roam, and other than size, the experience is nearly identical for the majority of our riding. If planned courses and workouts are your thing, then the Roam is the go-to. We would also go with the Roam if you need larger font on your data fields.

The claimed 17-hour battery life seems to be no exaggeration in our testing, as we exceeded that number every time. This is nice, because many of the navigation computers on the market don’t even reach double digits without an extra battery. At the end of the day, Wahoo users will be at home on the new unit, but for people making the jump to the brand, remember that the system is very phone-app-reliant.

• Sleek, light and easy to read