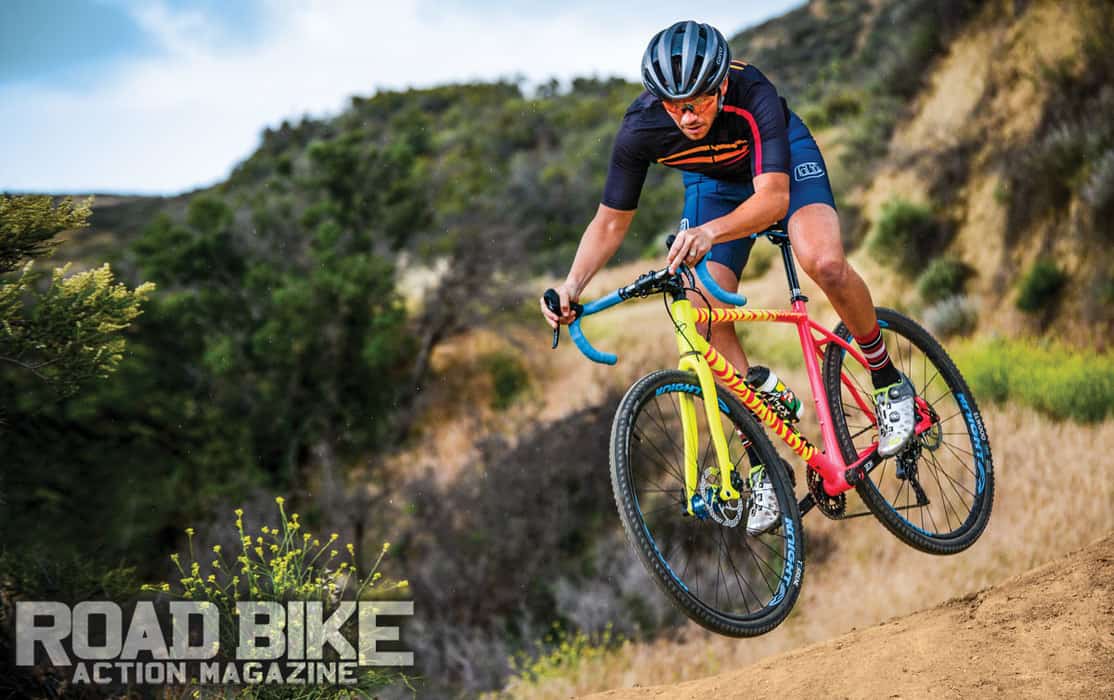 How random pit talk led to a most exotic gravel bike

As with every local SoCal cyclocross race I attend, I’ve always made a point in seeking out Dave Turner who, despite his nearly 25 years as the founder of a leading mountain bike brand (Turner Suspension Bicycles), had over the years become an avid cyclocross racer. Dave and I go way back to the days when I was the editor of Mountain Bike Action in the early ’90s and first gave him press as a pro racer, and then as a budding bike builder.

Fast-forward two decades later to last winter where we both stood in a field surrounded by cyclocross bikes. I was peppering him with questions about his new race bike, which, of course, was black and still a single-speed—two features that I find anathema. But, what caught my eye were the TRP hydraulic disc brakes, which I had never seen before. Intrigued that there was a hydraulic alternative to the big players, I invited him to build us a test bike with the brakes so we could see if they passed muster.

When this year’s Sea Otter Classic rolled around, Dave called to say that he had a bike ready for us. When I finally ambled over to the Turner compound, I was floored to see the result of that random conversation we had just six months earlier.

Dave Turner wasted no time: “You’ve given me such grief over the years for my black bikes, I figured that this time I would make something that I knew you could appreciate. Is it loud enough?!” 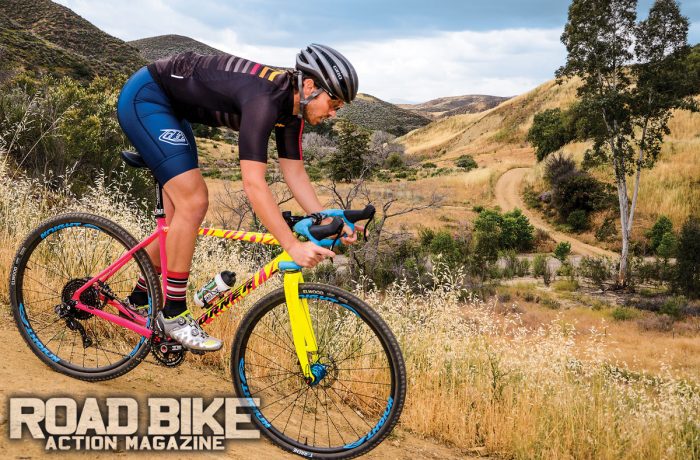 Given that Turner’s cyclocross/gravel effort is really just a sideshow business for his main import of building mountain bikes, he eschewed the high cost of carbon molds and instead relied on 6061 T6 aluminum to build the $950 Cyclosys frame.

Turner says the frame’s geometry best suits a cross between a cyclocross and gravel bike. “A true gravel bike is a separate animal that would normally sit longer and lower than this bike,” he said. “This bike was designed around the fire roads more commonly found out west. I kicked the head tube out half a degree from my original ’cross bike because I didn’t want it to handle like a sharp race bike.

For pure gravel riding like Dirty Kanza, it could use a longer top tube.”  Without a doubt, more striking than the nice frame details—flattened top tube for shouldering, machined drops, brazed-on internal cable guides and a flared seat tube—was the eye-catching paint, which came to us from Joe’s Bicycle Paint & Carbon Repair shop.

This is where the Turner project bike really takes on an air of the exotic. Since the bike’s very inception is owed to the TRP brakes, it’s worth noting the TRP package that made the bike possible. Of course, the TRP Hylex RS brake levers lack any shifting duties so the drilled-out levers and hoods are small and compact. The lever (with an integrated master cylinder) and caliper assemblies cost $135 per wheel with the slotted rotors (140/160mm) for $40 each.

While the bike was sitting front and center at the Turner booth, more than one person queried Dave on the Shimano Di2 drivetrain. As with the brakes, the shifting system also relies on TRP. It starts with their $45 Di2 adapter kit that includes cut-out brake hoods that house special brackets for mounting Shimano remote climber buttons. Beyond the handlebar-mounted gear indicator, the setup is so clean that’s it’s almost hidden from view.

In addition to the brakes, the Turner was spec’d with the $579 TRP carbon fork that is friendly to either a 12- or 15mm thru-axle. One of the nice features of the 450 -gram fork is the internal cable routing for the brake cable that keeps things clean.

Making the necessary gear changes is a Shimano XT Di2 rear derailleur that spreads the chain over a wild 9-42t cogset supplied by the mountain bike specialists at E*Thirteen. The $279 cogs are a three-piece unit that allow for a low-cost replacement. Our cohorts at Mountain Bike Action have plenty of experience with the E*Thirteen parts and had nothing but good things to say about the parts, other than the 9t cog could be rough on chain durability.

Bringing some international flair to the bike was Rotor’s 3D+ crank mounted with a 40t CX1 elliptical chainring. The Spanish brand has earned good renown for both the quality and durability of their machined-aluminum components.

The 35mm-deep hoops from Knight Composites were laced to Project 321 hubs. Despite the narrow 17mm internal width, they still ran well with a pair of 40mm Terrene Elwood Light tires. This was our first time aboard the $65 Elwood rubber, and we came away impressed with their dual-purpose abilities—good-cornering traction on the dirt while still fast on the pavement.

Last but not least were the burly aluminum stem and seatpost from our longtime American-made faves, Thomson. Thomson parts have always proved durable, which is especially useful on a gravel bike.

The TRP brakes worked as well as any other hydraulic binder we’ve ridden. On our first ride we encountered little free throw with full reach, which forced us to tackle bumpy descents on the hoods—never our preferred position—pushing the levers in versus pulling on them from the drops. Before our next ride we altered the reach adjustment, which gave us back the hands-in-the-drops position we wanted.

As super cool as the button shifters were, we did have two issues with their position. Making shifts from the drops was a task, but one that could be fixed by wiring up some sprint shift buttons within finger reach. And, we encountered more than a few accidental shifts when climbing with our hands wrapped around the hoods.

We have often said that if there is one ingredient that makes the biggest impact on a gravel bike’s off-road performance, it’s the size of the tires. At least in SoCal where our gravel riding is based on fast, slippery fire roads, spindly 32mm ’cross tires always come up short over the bumps and rain ruts. This is where the 40mm Terrene tires really excelled. In addition to rain-rut confidence, they also did a great job reducing the jolts from the miles of stutter bump we have to deal with.

What made the 18.8 pound Cyclosys so noteworthy, beyond the wild paint scheme, was its testament to the creative and really ingenious possibilities that building a gravel bike can bring to the table. A great gravel bike is best defined by the type of gravel that it’s ridden on; hammering SoCal fire roads has different needs than cranking through the middle of Kansas.

As Turner himself commented, “It’s funny how we used to only think about drop-bar bikes in three styles—racing, cyclocross and touring. The gravel segment has really opened up bike design. This is how we used to build our mountain bikes in the old days. You start with a frame and just go from there depending on your own vision of what kind of bike you want and, of course, the limit on your
credit card!”