Protecto Wants You To Be Seen 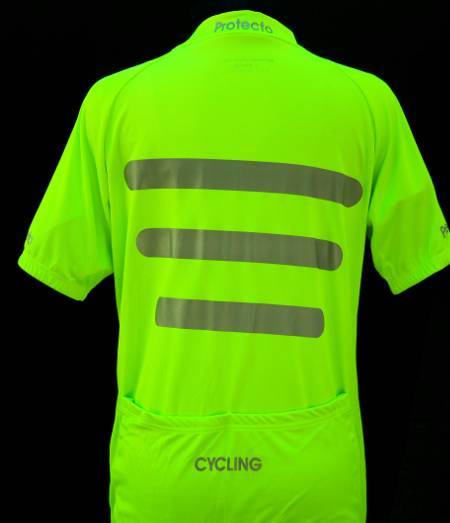 Southern California-based Protecto Products, a designer, manufacturer and pioneer in the field of reflective clothing, has formally announced the unveiling of their Reflective  cycling jersey .

Unlike traditional cycling jerseys, Protecto’s Neojerzees can be identified by their unique and fashionable silver strip patterns which provide high visibility for cyclists where visibility is critical to riders either in light or darkened environments.

“Wearing a reflective jersey   offers great protection when riding since  it  can be a  plus  to clearly distinguish a cyclist  in a low visibility environment while alerting drivers of their presence on the road’, says Serge Laraque, vice president of marketing.
This is where reflective, high visibility gear become important. With injuries and death on the increase, it is vital of being seen by others on the roadways.”

Presently, the company is introducing   their first style as other products designed for cyclists will be unveiled.  The Neojerzee is visible from front, rear, sides therefore giving the rider a full 360o visibility. New cutting edge hi-vis styles are always being developed.