The first stage of the Tour of Poland ended in a horrorific crash Deceuninck QuickStep’s Fabio Jakobsen thrown over a barrier at over 45mph while others crumbled to the ground in a desperate attempt to avoid a pile-up.  Footage showed Jakobsen, of the Deceuninck-Quick Step, racing elbow-to-elbow with Dylan Groenewegen of Jumbo-Visma as both men frantically tussled in a tight sprint to the line in Katowice. However, 23-year-old Jakobsen came off worst, falling into and over the barriers before colliding with a photographer.

The incident comes a year to the day after the death of 22-year-old Belgian sprinter Bjorg Lambrecht, died after falling and hitting a concrete structure in the 2019 race.

Deceuninck-QuickStep manager Patrick Lefevere  voiced his frustration over the event.  Saying “They have to put this guy [Groenewegen] of @TeamJumbo in jail.”

They have to put this guy of @TeamJumbo in jail 😡

“We don’t act that way, I just met the judges, he [Groenewegen] will surely be disqualified and we will see if it ends there,” race organizer Czeslaw Lang told Polish television TVP Sport.

“It was an unfair fight and one of the riders suffered tremendously, two more and then a judge suffered as well. The other runners are pretty much ok.”

Following the incident, Groenewegen was disqualified by race organizers. 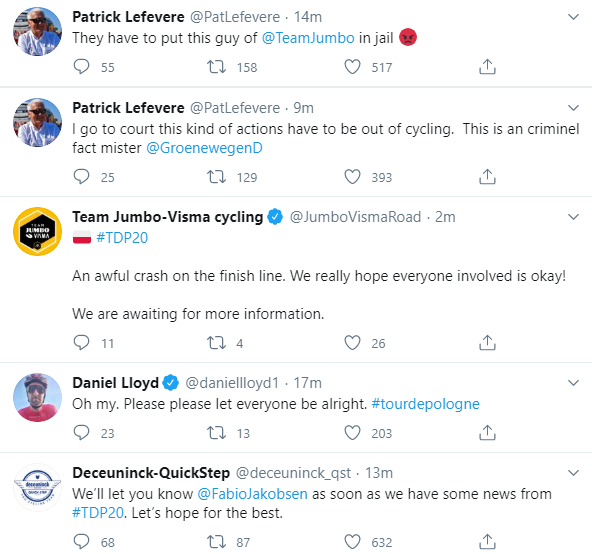