Quintana Has ‘No Regrets’ Over Giro-Tour Double

Colombian climber Nairo Quintana insisted he had no regrets over attempting a demanding Giro d’Italia-Tour de France double, despite admitting on Monday to feeling exhausted. It is almost 20 years since a rider successfully won the Giro-Tour double and that was in a dark period in cycling’s history where doping was the norm rather than the exception. Recent attempts to double up have always failed, with Alberto Contador coming fifth in the Tour in 2015 after winning the Giro, and Vincenzo Nibali managing only 30th in the Tour last year after his second Giro success.

“I don’t regret having done the Giro,” said the 27-year-old Quintana, who finished second to Dutchman Tom Dumoulin in May. “It was a gamble, something different we wanted to try. “We have a lot to learn from what’s happened and what we’ve done, so we can improve.” His Movistar team decided to tackle the Giro-Tour double this year, believing Quintana to be better during his second Grand Tour of the year than his first. But he admitted to feeling the effects of May’s efforts already within the first week of the Tour.

“Right now there’s more will than power,” admitted Quintana. “We’re still in the battle, we need to keep going and recover.” Quintana cracked on the final climb on Sunday’s ninth stage and lost 1min 15sec to race leader Chris Froome, to now sit eighth overall at 2:13. “We wilted due to a lack of strength — we’re not kidding ourselves — but there’s still a long way to go in the Tour to do something.”

Quintana insisted he’d managed his build-up to the Tour well, ensuring he had a lot of rest earlier in the year, but admitted that improvements could be made. “It’s the first time I’ve ridden the Giro and Tour and both have been very fast,” he added. “Right now I’m not at my best but I still hope to have a brilliant day.” 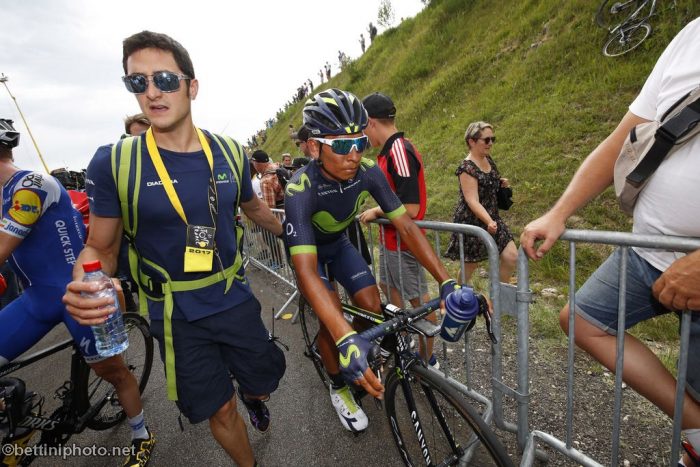