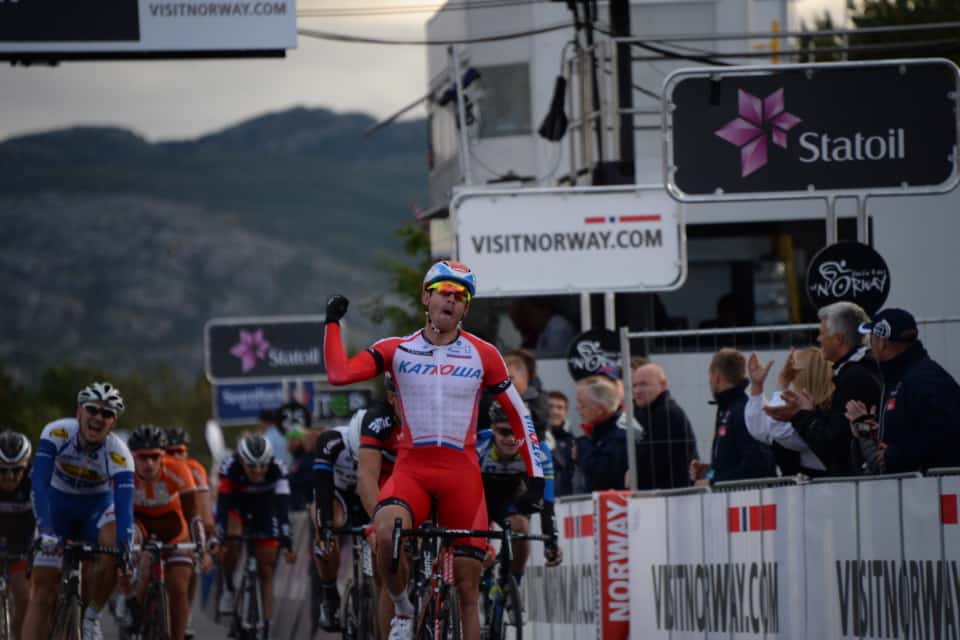 After Lars-Petter Nordhaug found in the North Cape his good hope of winning the overall classification of the Arctic Race of Norway, the host country celebrated another victory by a local as Alexander Kristoff out-sprinted Thor Hushovd in Alta. Moreover, his triumph on home soil was kind of a post-Tour de France revenge over Marcel Kittel. Due to the windy conditions on the way to Alta, it took five hours to the riders to complete stage 2 at an average speed of 37.621km/h.

Krister Hagen (?ster Hus-Ridley), Laurent Evrard (Wallonie-Bruxelles), Andreas Erland (Sparebanken S?r) and Petter Theodorsen (Ringeriks Kraft) were the attackers of the day as the race was flagged off in Honningsvg. They got an advantage of eight minutes after 45 kilometers of racing but the Belkin team was keeping the race under control thanks to the experience of their road captain Stef Clement who knew before the start that he’d have more time to spend in the wind at the head of the peloton after David Tanner was forced to pull out of the race due to a knee injury.

As Giant-Shimano and Katusha had this stage as a main target for Marcel Kittel and Alexander Kristoff respectively, they contributed to the chase. As the gap got smaller than two minutes within the last hour of racing, Hagen and Erland decided to continue without their two breakaway companions. Their determination was exemplary. They only got swallowed up with 11 kilometers remaining. Three kilometers further, a crash took a few sprinters down, among which Sondre Holst Enger (IAM Cycling), Danilo Napolitano (Wanty-Gobert) and Sam Bennett (NetApp-Endura).

The top favorites were safe though. Norwegian team Joker seized the reins of the peloton with 5km to go but Giant-Shimano and Katusha showed their expertise again at the very end. Thanks to a good lead out initiated by his young compatriot Sven Erik Bystr?m, Kristoff proved himself the fastest on home soil while his arch-rival Kittel crossed the line in fourth position.

‘It was almost a perfect sprint for me’, Kristoff reacted. ‘It was pretty chaotic but on the corner Sven did a good job. He had to keep me in the front. The team had controlled the race earlier. In the end I was the fastest. With 300 meters to go, I was actually not in the best position so I was a little bit nervous but I could take it. I’m happy. If I could choose, I’d choose to win on the Champs-Elyses but of course, it’s nice to beat Kittel here. It gives me the confidence that I can beat him.’

With the time bonus, Kristoff moved up to fifth in the overall ranking. ‘Tomorrow it’s too hard for me’, he warned his fans. ‘I don’t think I’m able to ride for GC but the last stage is another good one for me, so I’ll focus on that one.’

While Kristoff collected his twelfth victory of the season, the most prestigious ones being Milan-San Remo and two stages of the Tour de France, Nordhaug came home safely despite a crash early in the race. ‘It’s nothing’, said the race leader. ‘I’m confident ahead of the queen stage tomorrow. I strongly believe that I can win the Arctic Race of Norway.’

Stage 3 will feature a much shorter distance (132km) from Alta to Kvnangsfjellet where a 7-km uphill finish is expected to shape up the final standings.

The September 2014 Issue Has Landed – VIDEO

Aero Evolved: Alphamantis & The End Of The Wind Tunnel