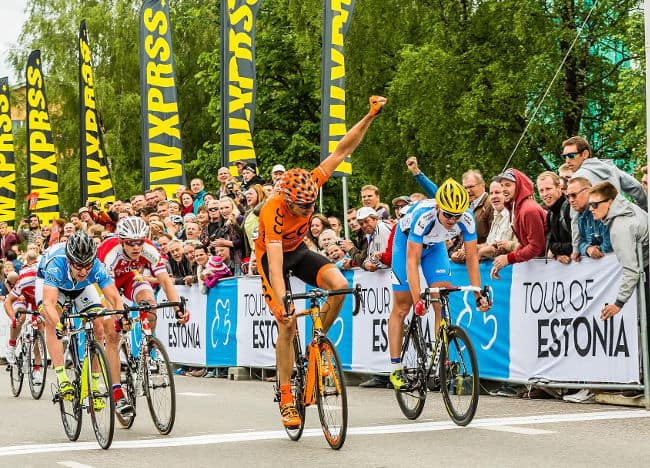 Tour of Estonia ended today with the Tartu GP which was won by Adrian Kurek (CCC Polsat). Eduard Michael Grosu finished second and won the Tour of Estonia. A Breakaway consisting of Gert J?e  r (National Team Estonia) and Adrian Kurek (CCC Polsat) lead the race for last couple of laps and was caught by the peloton only until the last hundred meters. Grosu was at the head of the group and managed to reach second but couldn’t beat Kurek.

“Today was very hard. All of teams were attacking constantly. I tried to stay at the head of the peloton in the end and managed to catch Kurek and J?e  r,” said Grosu.

“The race was very fast and very hard. We managed to work together quite well with Gert J?e  r in the end but I was confident of my sprint finish and managed to beat him and also stay ahead of the main group,” said Kurek who won todays Tartu GP stage and was second overall.

“I was also maybe a bit unlucky in the end,” said J?e  r who finished third. “I was in a perfect place for the finish but I had to attack early. Otherwise the peloton would have caught me even earlier. At least I tried’.

Tour of Estonia finished today but tomorrow SEB 33rd Tartu Rattaralli takes place where most of the pro cyclists who competed today and yesterday will take part alongside amateurs and cycling fans. Altogether about 4100 cyclists are expected to start tomorrow.

If The Tour de France Gets Rescheduled…