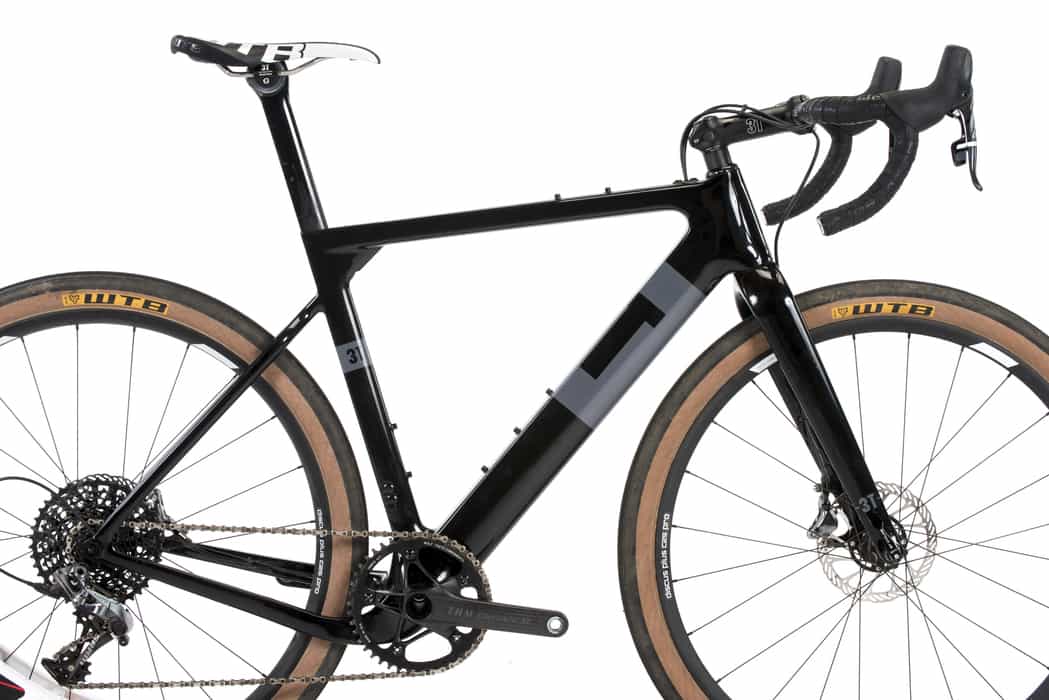 Gravel bikes and aerodynamics go together like oil and water. At least that was the case until 3T joined the gravel craze with the Exploro, the first aero-gravel bike to hit the market. Why is there a need for such a thing and why is a traditional component brand the one to bring it? The answer to both of these questions can be traced back to Gerard Vroomen. Yes, the same Vroomen of Open Cycles, formerly of Cervelo, co-owner of 3T, and above all, an innovator.

Vroomen has frame design savvy, aerodynamic experience, and a passion for mixed-surface riding. All those things culminate in the Exploro that uses truncated airfoil tube shapes (“Sqaero”), some of the most aggressive geometry you’ll find in the dirt, and solutions for achieving massive amounts of tire clearance. Its design intent is simple, to be the fastest gravel bike there is. 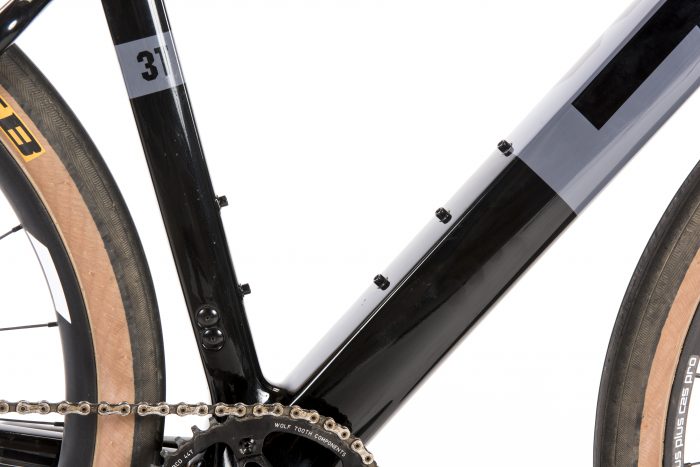 At the San Diego Slow Speed Wind Tunnel the Exploro was shown to save 7 watts at 20 mph in comparison to a round tube bike with the same component build. Much of the aerodynamic elements of the bike come from the massive 50mm wide downtube and 25mm wide seat tube that uses Sqaero profiles. The dedicated 3T Charlie Squaero seatpost also continues the seat tube’s same profile.

A 7 watt savings is all well and good, but in reality it’s very marginal in an event where minutes, not seconds, are typically the difference between the top riders. A tighter fitting jersey, or more efficient position, could have a much greater effect on speed. However, with that said, as long as sacrifices in handling or weight aren’t made in order to gain that slight advantage, we’re quite happy to take it. 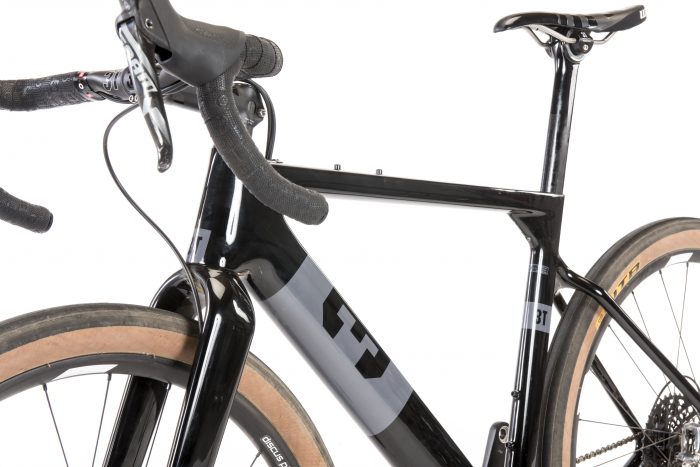 Like the Open U.P. frame, the Exploro is designed around “GravelPlus”, which simply means geometry won’t be adversely affected when using a 700c wheel with a gravel tire, or a 650b wheel with mountain bike tires since the two will ultimately have a very similar diameter. While the ability to use 700c or 650b wheels isn’t something unique to 3T, what is special is how much tire clearance the frame allows for having such a short 415mm chainstay length.

In order to achieve the tire clearance, Vroomen told us, “There are only a few ways you can get 2.1″ tire to fit; lengthen the chainstays which hurts the handling, use thinner stays which bring unwanted flex, make them higher which adds weight, or make them asymmetrical and drop them down like we’ve done.”

FLIPTOPS, NIT PICKS AND OTHER FEATURES 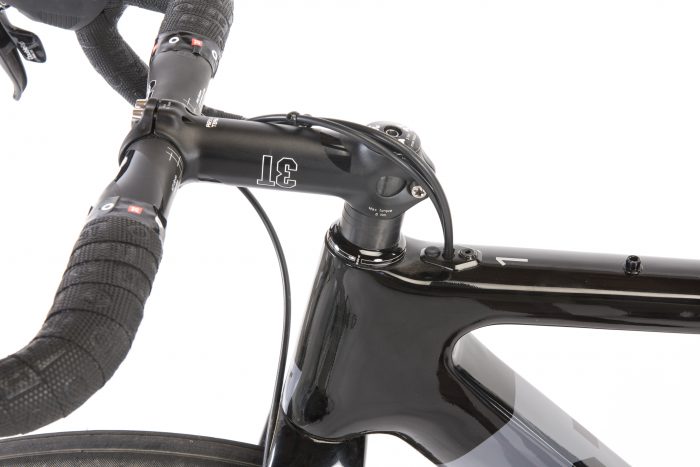 Taking a page from aero-road and time trial bike designs, the Exploro routes cables through a FlipTop guide positioned on the top tube, just behind the head tube. The guide is available in multiple versions for mechanical, electronic, 1x and 2x drivetrains.

What makes the Exploro so revolutionary is the fact that Vroomen sought to improve upon every element of a gravel bike’s design; but one of those things we found slightly cumbersome. The HangLoose rear derailleur hanger is held in place only by the thru-axle that threads into it. When the thru-axle is taken out, the derailleur is no longer affixed to the frame, which 3T says makes it easier to remove/install the rear wheel. In reality, having the derailleur hanging loose during a roadside repair, or when in the trunk of a car is simply a pain, not to mention a greasy affair. 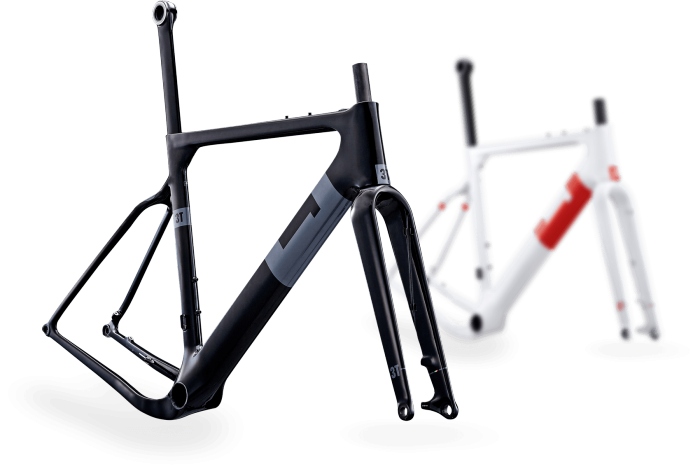 Two frame versions of the Exploro are available, the $4200 LTD and $3000 Team. The difference in each, other than color, is the carbon grade and layup complexity. The LTD comes in Black and weighs an impressively light 950 grams (minus all metal bits like derailleur hanger), while the Team comes in White and weighs 1200 grams. Limited sizes are currently available.

TIME TO CRUSH
Getting our hands on an Exploro to test looked to be a tough task considering there was only one Medium size bike in all of the U.S. mid-summer. Yet, after floating the idea to race it at the Crusher In The Tushar to Dave Koesel of 3T North America, we had an LTD Exploro just in time for the road trip to Beaver, Utah, home to the Crusher.

Crusher In The Tushar is comprised of 60 percent dirt, with the remaining 40 percent on pavement. At just 69 miles, the course is somewhat on the short side compared to many other gravel events, yet they’ve carefully packed 10,000 feet of climbing into that distance. Because of the going up, or going down nature of the course, aerodynamics probably weren’t going to play into things quite as much as say an event such as Gravel Worlds in Lincoln, Nebraska, or even Dirty Kanza, which see much less vertical gain per mile and subsequently, higher average speeds.

PARTS SPEC
The Crusher’s course is known to have severe washboard sections, notably on the white knuckle descent, and the subsequent climb back up, so I decided it would be a prime opportunity to test it with 650b wheels and the ultra-high volume 47mm slick Horizon tires from WTB. In the hopes of smoothing the bumps with tire volume, I accepted the risks of navigating the half dozen switchbacks without any tire knobs. Tire pressure was set at 35 psi for the rear and 32 psi up front.

As far as gearing goes, the extreme differences in speeds, as low as 7 mph on the way up and high 30s on the way down (when pedaling was necessary), a SRAM 10-42 XD cassette on the back with a 44t Wolf Tooth 1x chainring was used. The Exploro also showed up with probably the most expensive crank to ever be used in a gravel event–the $1,200 German-made one-piece carbon THM Carbones Clavicula SE. Of course, since the frame uses a 386EVO bottom bracket, most any road crank is compatible.

With most gravel bikes I’m always trying to get lower in the front-end because the stack is so high, that’s not the case with the Exploro though. A short head tube length helps the stack to come in lower than any other gravel bike I’ve ridden, and much more in line with a road racing fit.

FLY DOWN, CRAWL UP
The Crusher In The Tushar attracts a solid field of pro road, mountain bike, and ‘cross guys, so I went in knowing that I would need to be pushing the limits of my fitness and descending abilities just to stay in the mix. At slightly over 17 pounds, the Exploro helped ease the pain of the long, 4,000-foot climb that greeted us at the very beginning. Nearing the summit of the climb we readied for what would cause the next selection of the day, the descent. Speeds went from 30 mph, then to 40 mph as large chunks of gravel shot out from under the tires of riders in front of me. As the pitch steepened I hit 49 mph, floating over washboard bumps before having to scrub a ton of speed to drift around a switchback. In the three times I’ve raced Crusher, this was the fastest I had ever descended. Even with slick tires, the overall width gave impressive traction, and with the inside foot as an outrigger, I could quickly get in and out of a turn.

Back on the pavement the Exploro and its fat tires were as fast, if not faster, when descending in a tucked position, than the eight other riders in the front group. Once looping back to the screaming fast descent we had just come down we had to climb back up. This is when you’re grateful for a light bike and tires with a lot of air volume since when ascending at such slow speeds every little bump ruins momentum with narrow tires.

By the time I got to the finish after 4.5 hours of racing I was quite pleased with how the Exploro performed, especially considering it was my first real ride on it. It’s without a doubt the most race-specific gravel bike available, and not only in terms of aerodynamics. More important than that, it’s lightweight, torsionally stiff, and has a performance geometry while still feeling well balanced at high speed.

Is it the one gravel bike I would buy? It would be at the top of the list if it had a third bottle cage mount on the underside of the downtube. I know that could hurt aerodynamics, but it would go a long way in eliminating the need for a hydration pack on long rides, and that’s important in my book.

THE TRAVAILS OF PELOTON AND PEPPA THE PIG