Rally Cycling has completed its women’s roster for the 2018 season. The team’s core group of riders are back, women who helped account for 46 wins and 98 podiums in 2017. Team Director Zach Bell will continue to lead the squad.

“2017 was about developing the strong group we knew we had,” said Bell. “We found a good cultural balance within the team. Riders were having fun and pushing each other. It was important to keep the team together as much as possible, because we developed great chemistry, and I think we still have a lot of performance potential to see from them. The more they have been through, the more each rider can stretch outside her comfort zone and find a new level.” 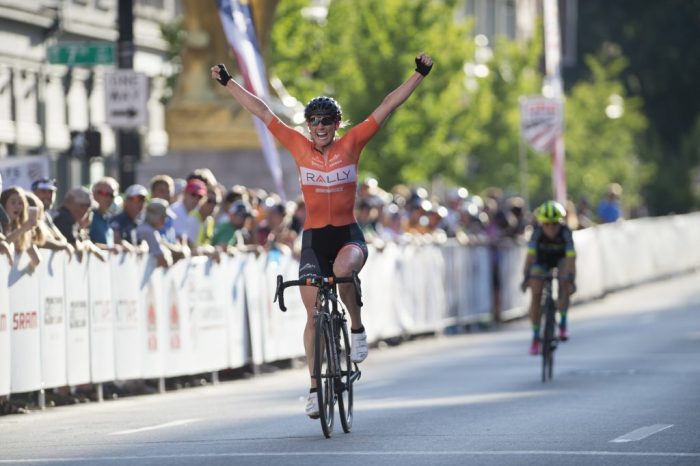 The team spoke to a few of the returning riders during their busy offseason, which were filled with full-time studies, cross-training and track racing.

Erica Allar won her first national title in 2005 when she attended Penn State University as a Liberal Arts student. Since then, the naturally gifted sprinter has won nearly every criterium out there. Until July of this year, the one target race that had not been added to the long list of wins was the US Professional Criterium Championships.

“Winning the criterium championship meant so much to me,” said Allar. “Most people only see the victories. They don’t see all the training, the hard work, the challenges we face on any given day to achieve those things. I’ve come super close to winning it but never quite put it together. Winning that jersey was a highlight of my racing career.”

Now pursuing her second degree in the Master of Arts for Teaching program at Piedmont College, Erica spoke about the importance of balancing education and professional sport.

“I think it’s important that people recognize how many riders on our team are actually in school while racing,” said Allar. “And that Rally Cycling has been really wonderful in supporting our academic endeavors while we represent the team and sponsors on the circuit.”

As for her objectives moving forward, Allar did not have to think for long.

“My personal goals in 2018 are to win a few key races and defend my criterium title. As a team, I want to be a good teammate and leader and do what I can to help our squad keep on this path of success.” 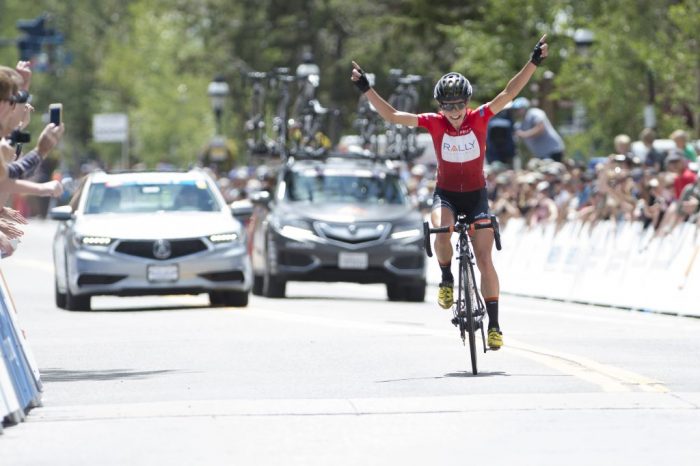 The 2017 U23 Canadian time trial champion finished her season on a high, but it did not start that way – following an early season crash that left her with a fractured arm, Poidevin was forced to sit out the first half of the season.

“This year was the first year I’ve had an injury that caused a pretty big setback in my season,” said Poidevin. “The racing season in North America is short and I missed out on the major races early in the season. It was definitely a big mental and physical challenge, but I was very well supported by the team and my family and coach at home, which makes a huge difference. Following the team’s results through the early part of the season helped me stay motivated and focused while training at home and waiting to be cleared to race.”

“Winning the final stage and the overall in Colorado was really special,” said Poidevin. “The team raced so well together throughout the season and I was really excited to be able to reward them with the win.”

“There are a lot of different personalities in the team. It’s a super fun and unique group. Everyone understands the work that needs to be done and pushes one another to train and race our best.”

US Under-23 champion Emma White takes aim at elite title

“I’m a big believer in not taking anything for granted,” said White. “This has always been a dream so having two big events back to back fuels me. Being on the road with the best team ever, doing what I love, and doing it well. When you’re on a stretch like that, it feels like you can go forever.”

The stretch that she referred to was her stage four win at New Mexico’s Tour of the Gila followed by the overall classification victory at the team’s hometown race, the North Star Grand Prix.

“Winning North Star was an unbelievable feeling,” said White. “The biggest switch in my brain that went off was that my team believed in me. It gave me extra power to get it done. It was not an individual effort, the whole team was behind that result and I will never forget it.”

2016 Olympic silver medalist and 2015 Pan American Games time trial champion, Kelly Catlin, is back for more. Not even a broken hand and wrist could stand in her way this season. A senior at the University of Minnesota, majoring in both Mathematics and Chinese, she put into words why she thinks the team has reached its current level of success.

“There seem to be three key relationships for a professional team’s success: how the riders interact with each other, how the staff interacts with each other, and how the staff and riders interact,” said Catlin. “Rally Cycling has nailed this synergy. The riders and staff have that rare combination of huge work ethic and minimal ego that make for successful teamwork in every capacity. With that comes victories both on and off the bike.” 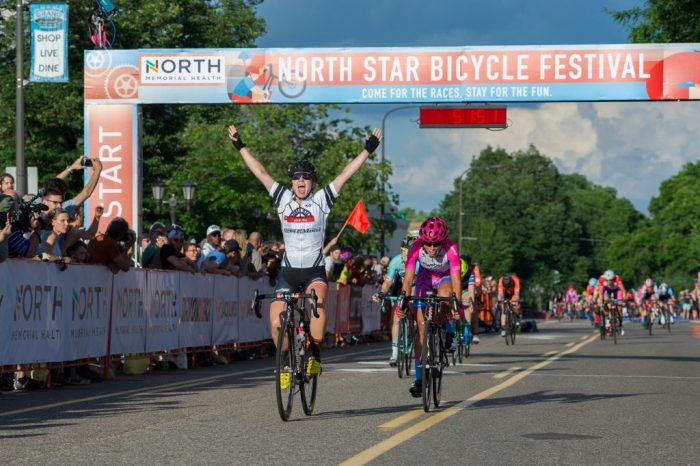