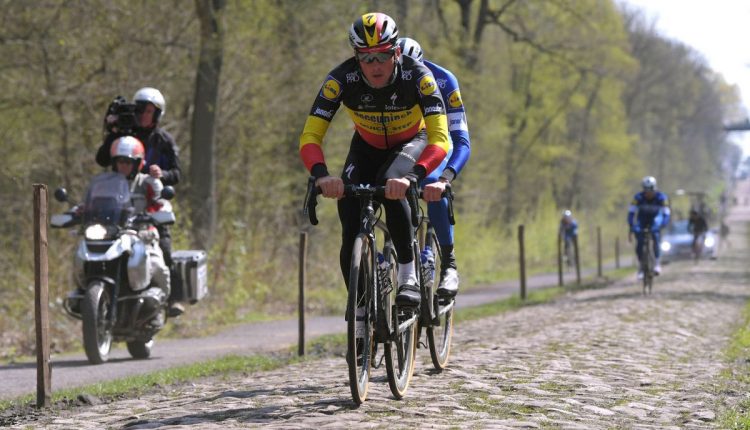 We asked some of the Deceuninck – Quick-Step riders, who between them have more than 40 starts in “The Hell of the North”. There are a lot of reasons why people love Paris-Roubaix. From the fact it symbolizes a throwback to road racing’s early days, with its notorious bone-juddering cobblestone roads to the legendary velodrome where riders have etched their name in the history books for more than a century, Paris-Roubaix is unique and that has helped it cement its place in collective imagination with every year that has passed since 1896.

The rough pavé of Northern France – some tracing back to the Roman Empire – lend to a different type of racing, both attritional and spectacular, which was always bound to win new legions of fans, who for 364 days dream of that special day when Paris-Roubaix will take its place as queen among classics once again and wait for its king.

Unfortunately, we are living strange times, which have thrown the whole world into the unknown and changed life as we know it, including the cycling season, which is on pause for at least a few more months. Races have been cancelled or postponed, in the latter category falling also Paris-Roubaix, which should have taken place this Sunday.

But because it’s an event that defines our team, we wanted to pay tribute to it, and what better way than a special video (which will be launched this weekend) and this article where our riders share their thoughts on what they believe to be the most difficult Paris-Roubaix cobblestone sector?

WHAT THE RIDERS HAVE TO SAY
Kasper Asgreen
“Carrefour de l’Arbre, because it sucks out the most speed. It’s very slightly uphill and the cobbles aren’t in the best condition in that part, which makes it really tricky. Add to that some corners where you have to go really slow, and you understand why it’s so difficult to get the bike back to speed again. Carrefour de l’Arbre is also the sector that inflicts the most pain to your hands and wrists.  There’s also the fact it comes so late in the race and it’s part of a wearing combo that includes Camphin-en-Pévèle and Gruson, and your legs are spent, but you still have to dig deep and keep the speed going on those bumpy cobbles.”

Davide Ballerini
“Carrefour de l’Arbre also for me. It’s where I crashed last year after a contact with a spectator, in one of the first corners. Everybody knows it’s one of the key cobbled segments of the race, comparable to the Arenberg Forest, but there is a catch: you begin it with more than 200 kilometers in your legs, and it’s really difficult, especially as there are some holes between the cobbles, so you have to pay extra attention to this detail.”
Tim Declercq
“Every time I do this race which I love so much, I do just half of it, my finish line being at the Trouee d’Arenberg. That’s why it’s the hardest for me, because I am completely empty there. On the other hand, when I raced the U23 event, I made it a lot of times to the finish line and I was surprised by how tough Hem was, despite being rated as a two-star sector. After so many kilometers in the saddle, it hurt a lot.”

Bob Jungels
“I’ve done Paris-Roubaix as a Junior, U23 and in my maiden pro season, and every single time it was the same sector, Carrefour de l’Arbre. Back in 2012, when I won the Espoirs race, I was alone at the front and Carrefour de l’Arbre was the most demanding part of my breakaway, it seemed like it would never end. Because it features so close to the finish, it usually decides the race, and I still remember how much I suffered there the only time I raced Roubaix with the pros. For me, it was a question of surviving.”

Iljo Keisse
“Not just because it’s one of the most famous, but also because it’s one of the longest and the cobbles are really, really bad, like having been thrown there from 200-300 meters away, Arenberg is the toughest of them all. Every year it’s a huge fight to enter that sector in a good position, that’s why the domestiques have to work super hard to bring their leaders to the front of the bunch. The first sectors aren’t that hard, but the thing is that you have to bring your leader at the front so he is in an excellent position for Arenberg, which makes it feel like a bunch sprint every ten minutes or so, so that drains you before the forest. Half of the peloton enters it, but only the first 20-30 guys can still win the race. That’s where the leaders show themselves for the first time. If you aren’t good there or have spent too much energy due to poor positioning, you can say goodbye to any ambitions of taking the victory, because the speed will continue to drop and you’ll be out of energy and just drag yourself from one cobble to another. As a domestique, despite all the effort you put in that day, you still want to finish the race, so you give everything and push yourself to make it. To arrive there, on that famed velodrome, is a small success and the feeling it gives you it’s quite unique.”
Yves Lampaert
“I have five Paris-Roubaix starts, and on all occasions I found Carrefour de l’Arbre to be the most energy-sapping sector. Like some of the other guys have said, it comes so late in the race, when you are beginning to feel tired, and having Camphin-en-Pévèle just before means you don’t have any time to rest. Carrefour is long, has some corners where you need to pay extra attention, and the huge crowds on both sides of the road make you feel like in another dimension.”

Michael Mørkøv
“I did Paris-Roubaix several times, six to be more precise, and back in 2012 I was part of the early breakaway and I approached Arenberg in the lead, which proved to be very important, as after 100 meters, the guy in fourth wheel crashed and took down half of the group. The moment you enter Arenberg, the speed goes up to around 60 km/h, because the road pitches downhill, which is an extra stress factor on those nasty cobblestones. Every year you do the recon, you realise just how difficult Arenberg is and how completely different and hectic it is when you go through it at race speed.”

Florian Sénéchal
“Arenberg is the most difficult, but also the hardest, not just for you, but also for the bike. In 2014, my second year as a pro, I rode Paris-Roubaix for the first time, and I still remember that day like it was yesterday. It was crazy there, with hundreds, if not thousands of people, who yelled all the time, applauded and encouraged all the riders, making for a really electric atmosphere. What made the whole experience even more special is that I came out of the forest at the front of the peloton, and that gave me a special feeling.”

Stijn Steels
“I would have to say Hem. Surprising, right? It’s not really the toughest segment, but because it comes at the end of the race, you really feel it in your legs. Once you’ve exited Carrefour de l’Arbre, you tend to think the race is over, but then you start Hem. The cobbles aren’t that good there, you can’t ride on the side of the road, in the corners you can’t sit on the wheel of the other riders and have to spend a lot of energy just to remain in the group, and I think it’s all these factors that make it very hard, especially mentally.”
Zdenek Stybar
“The place where the race properly kicks off is Arenberg and that makes positioning crucial. In some years, I didn’t even make it to the front before entering that sector, it’s like a crazy bunch sprint, and if you miss a beat you are unable to return to the head of the peloton. There’s a big fight, the bunch splits into several groups, you can encounter a mechanical like I did some years ago, when I had to change a wheel, so anything can happen there. You never go flat out in Arenberg, but you still have to be extremely focused, because there’s a reason they say you can lose the race there. The interesting thing is that not the cobblestones are decisive, but the fight for positioning, which starts some ten kilometers before you hit the forest. From some ten riders next to each other you go to maximum two, because the sector is so narrow and the trees and the many fans who are there make you feel like inside of a tunnel.”

Bert Van Lerberghe
“Two sectors before Arenberg, you have Haveluy. Everybody is already very nervous, and they become even more tense there, because the segment contains a lot of corners and if you’re not in a good position, you’ll end up paying for that, as the elastic will snap due to the high speed. Arenberg is closer and closer and all the riders want to be in a good position, so crashes happen very often. From my experience, the better you are placed on Haveluy, the more comfortable you’ll be in Arenberg and the most energy you’ll save for the final. That’s why, in my opinion, this is the most important Paris-Roubaix cobblestone sector.”

Let’s Ride – Join In On The Tour of Inspiration