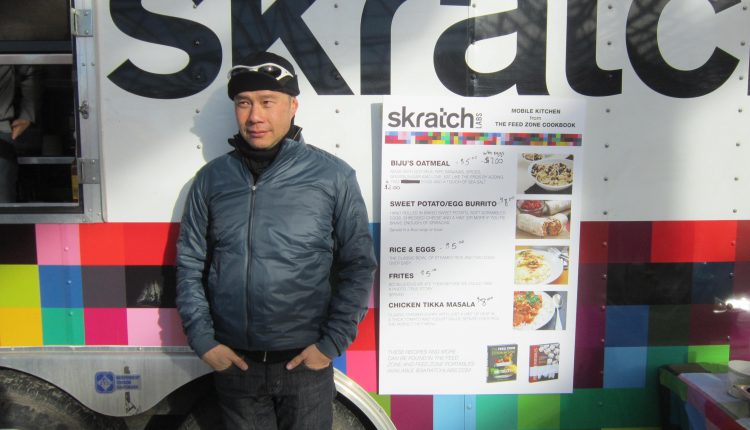 Of all the brilliant kooks in the bike industry (thankfully, there are many)  Skratch Labs co-founder Allen Lim remains near the top of my list of favorites. Maybe it’s because he cut his teeth on a road bike doing laps in the twice weekly training rides that lap the Pasadena Rose Bowl much like I do these days. Maybe it’s because I’m still appreciative of how his his rice cakes (w/ bacon and honey) sustained me during last years Tour of California. Actually, I think it has most to do with the fact that as smart and worldly as he is, he doesn’t take himself too seriously – despite the very serious world of professional racing that he surrounds himself. Best of all, unlike many industry celebs, Allen is never unafraid to embrace his inner silliness.

And so it is that last week two big news items regarding the coach/nutritionist came across my desk: 1. Allen and his Skratch Labs partner and chef Biju Thomas have just released a new cookbook (“Feed Zone Portables“) to accompany their first Feed Zone effort, and 2. In a big-step, Skratch Labs hasteamed up with the Amgen Tour of California to organize menus for the participating riders. As the days and hours ticked closer to to the start of the ToC in Escondido, CA, I was lucky to track down Allen for a quick interview. 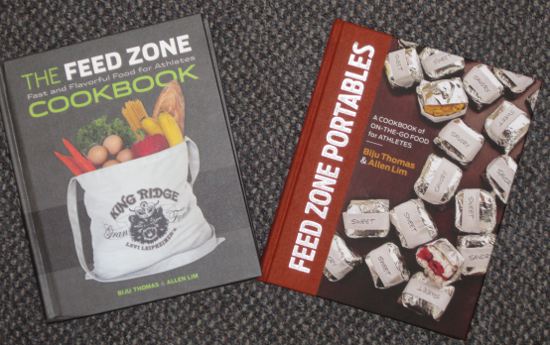 RBA: How would you describe the new book and compare to the first one?
Allen: Compared to the Feed Zone Cookbook, our second Portables cookbook is a lot more specific in content, focusing only on portable foods that can be eaten during endurance exercise or when on the go. The first cookbook was a broad look at cooking for athletes. While the second is highly specific, it also answers a lot of questions that we had from original Feed Zone users that we didn’t have time or space to address in the first book. We learned a lot in writing the first book and I think that this second one is overall a better albeit more narrow look at sports nutrition and cooking.

RBA: We saw a new partnership with the Amgen ToC – what was behind that decision to get with the race? Will the Skratch trailer be at the races for people to sample ala Sea Otter? Can they purchase the book?

Allen: The decision to partner with the Amgen ToC was pretty simple. First and foremost, I love the race and providing great food to help the riders and staff perform at their best is part of the race heritage that Biju and I now execute through Skratch Labs. For years, Biju and I helped to manage the food eaten by individual teams so it makes sense and is rewarding to be able to bring great food to all of the teams. To that end, we’ve been working with the race hotels and their catering staff for the last two months to plan the menus and execution at this year’s event. So we won’t be cooking with the Skratch kitchen trailer, but it will be at the race each stage with food and our hydration products for race fans. We’ll have some copies of the Feed Zone Cookbook and our new Portables Cookbook for sale out of the trailer, but there’s a good chance that we’ll sell out as we won’t have a ton of books on hand. So find the Skratch kitchen early! 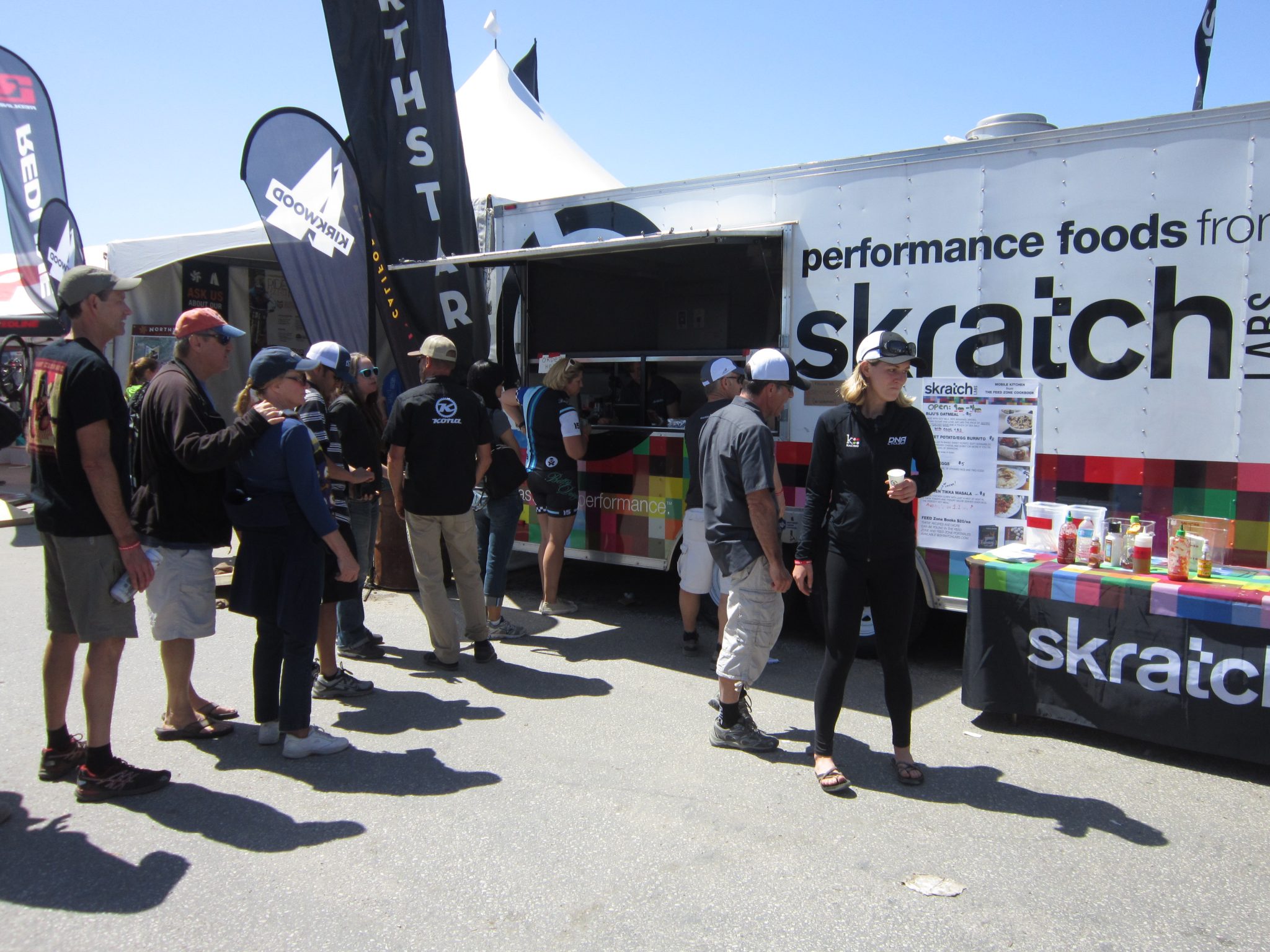 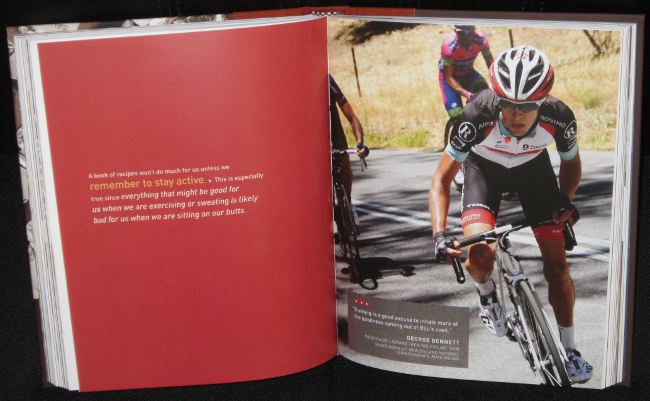 RBA: We recently used the Skratch pineapple hydration mix…delicious…the thought occurred to me, how does that process work to come up with a new flavor? Does the flavor idea come first or is there a chemical mix menu that you get to choose from?
Allen: There’s absolutely no chemical mix menu that comes into play when coming up with a flavor. Because we only use real fruit and nothing but real fruit to flavor our drink mixes, creating a new flavor is akin to coming up with a new meal recipe. We first start by talking to our fruit supplier to see what we fruits we can source for a  period of time. Because fruit isn’t always homogeneous in flavor and form, we then test that fruit to make sure the sugar content and flavor profile is up to par. Then we experiment with different amounts of fruit to get the right taste and mouth feel. We’ve tested and have made a lot more flavors in small batches ranging from mango to apple to pomegranate, but we currently only sell a few flavors now because we aren’t always able to consistent replicate the taste in a particular fruit batch. That said, we’re constantly working with different suppliers for different fruits so that we can have some more offerings in the future. It may work out that we may have to rotate different flavors in and out depending upon the season. Other companies will never run out of “orange” flavor, but we may occasionally run out of “oranges.” 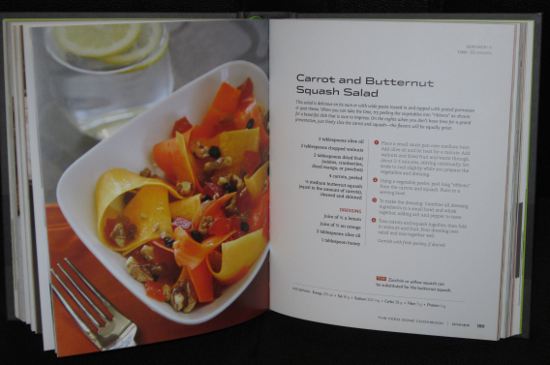 RBA: Have there been any moments of “re-think” or “new-think” for you in regards (to earlier held ideas) about performance foods?

Allen: All the time. In fact, learning is all about making mistakes and in hindsight a lot of my best ideas were in some way or another just another step along a gradient of mis-steps and problems. So many of the ideas I’ve had about food came from solving problems athletes were having with the food we once gave them. If we hadn’t given them that food in the beginning there wouldn’t have been any problems and hence no change and zero refinement. But even though performance is a constant refinement, there’s much more to food than performance. There’s the morale, camaraderie, and simple joy of eating great food and lately that’s been where I’ve been putting most of my focus and thought.

RBA: There is no Skratch recovery drink…what the heck should we be using!??!??
Allen: Until I can make a recovery drink taste as good as chicken fried rice, my advice is to go with chicken fried rice. I’d love for people to not ever feel that what’s best for them is a list of chemicals on the back of a plastic tub when they can make real food from scratch. I realize pre-packaged nutrition is largely a matter of convenience, but I don’t think most people become athletes or get into cycling because it’s easy or convenient. 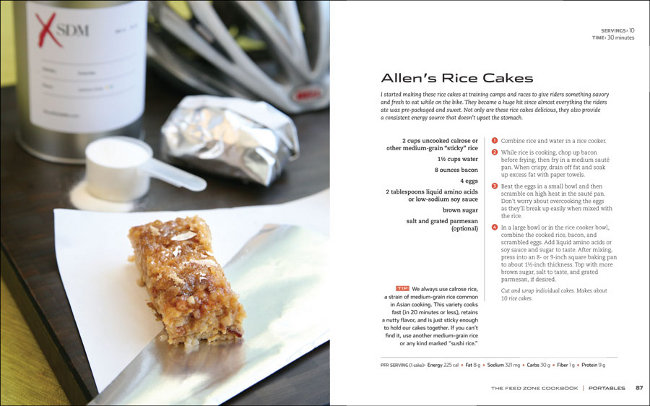 RBA: I tend to think most riders put a higher value on miles, miles, miles with less thought about the fuel. Roughly speaking, is there a value ratio that you would attach respectively to the importance of training versus diet?
Allen: No. Attaching a respective importance to training versus diet is difficult to do. In some cases the adaptation created by a given training load can be improved or hurt by a given diet. As an example, a lower volume of training in a low glycogen or calorically restricted state might enhance fat burning to the same extent as a higher volume training load in a high glycogen state or calorically unrestricted state. Likewise, a lower training volume with positive energy balance may just make you fat, while a high training volume with a negative energy balance may just make you sick and slow. Ultimately, performance is more often a three or four or even five legged stool, with each leg playing a critical role in maintaining that performance. Cut enough legs off and you’ll eventually just fall over. So with respect to training versus diet, I’d rather see an athlete stand on two perfectly solid and equivalent legs than balance on just one.