RBA Tech: One For All And All For One 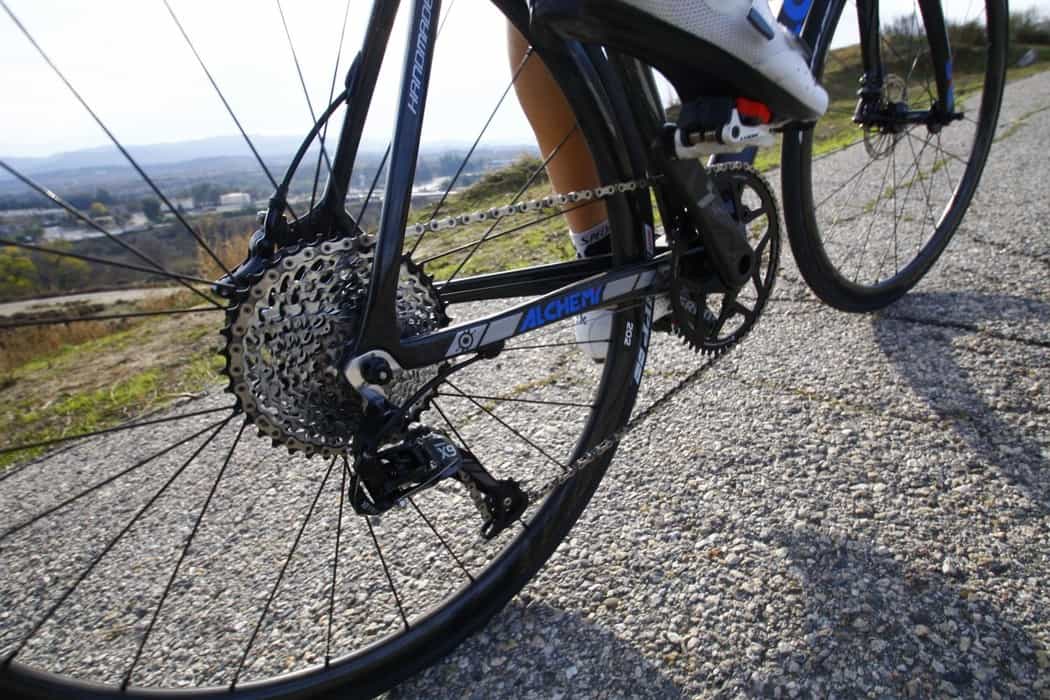 Road bikes have come quite a long way since the days of down-tube shifters, quill stems and freewheels. Carbon frames, electronic shifting and now even disc brakes are commonplace across numerous price points. What could possibly be next? Hydraulic shifting? Twelve-speed drivetrains? Hey, how about the elimination of front shifting altogether?

After finishing our cyclocross project bike that afforded us the first opportunity to build up a bike using SRAM’s latest CX1 drivetrain that is noteworthy for its use of a clutch-style rear derailleur and single-chainring combination we pondered on the other applications of the CX1 drivetrain. As enamored as we immediately were with the drivetrain’s potential in a ’cross race, it didn’t take us long to start thinking about how the parts might play in a road bike-specific application.

GOING SOLO
It was over two years ago that SRAM successfully eliminated the front derailleur for mountain bike drivetrains when they introduced the XX1 group in 2012. Unlike a single-speed bike that maintains a static chain line, owing to the chain moving up and down the rear cassette, SRAM needed to do more than just lose a derailleur and chainring to make the system work. Key to the success of the system was using the newly designed X-SYNC tooth profile on their chainrings, which alternate between thick and thin in order to limit the chance of derailing.

For the past year, cyclocross bikes have also been going in a similar direction, with SRAM’s Force CX1 single-chainring drivetrain helping to speed things along. Even though SRAM is tight-lipped about the chances of similar technology finding its way to the road, it’s something that we’re certain will be here sooner rather than later. We decided we couldn’t wait.

To lay the groundwork for the single-chainring road bike by first cozying up to the cyclocross crowd, SRAM chose the easiest route they could since cyclocross riders were already looking for single-ring solutions. Additionally, the gear range required for ’cross racing was a far cry from what would be necessary for the road. While the Force CX1 group’s five chainring size choices (38, 40, 42, 44, 46) and three cassette options (11-26, 11-28, 11-32) are suitable for ’cross racing, on the road where speeds are higher and the climbs are longer and steeper, a much broader gear range is required. This presents its own set of hurdles to overcome.

WHAT ARE THE BENEFITS?
Weight reduction: Although a cassette with larger cogs (and added weight) will be needed to deliver an adequate gear range, getting rid of the shifter mechanism in the left lever, front derailleur, cable/housing and inner chainring can add up to more than half a pound.

No dropped chains: Veteran Tour de France fans still recall Stage 15 of the 2010 Tour de France when Andy Schleck lost his chain as he battled elbow to elbow up a climb with Alberto Contador. Would Schleck have won the stage if he hadn’t suffered a jammed chain? We’ll never know. But by eliminating the potential for front-derailleur shifting mishaps, for both user and mechanical error, is a significant boon to a single-chainring system. This will be beneficial for pros and not-so-pros alike.

Oval chainrings: There are many of us who are sold on the benefits of non-round/ elliptical chainrings (from the likes of Rotor and Osymetric), but the front derailleur setup required to accommodate the non-round rings can lead to inconsistent shifting that limits their wider acceptance. A single-chainring design can only bolster the number of riders benefiting from pedaling ovals.

Simplicity: Experienced cyclists can take for granted how easy it is to always know what gear to be in, almost like it’s second nature. But, watching a novice is a great reminder that simpler is better, as long as simple still meets our needs.

YES, ANOTHER RBA PROJECT BIKE
We aren’t the first ones to apply a 1x drivetrain to the road. In fact, Specialized sells a Venge model called “Lunch Race,” which uses a 52-tooth single chainring mated to an 11-28 cassette. Unfortunately, unless all you do are relatively flat rides and criteriums, that gearing won’t be of much use to you. What we had in mind was to build our own 1x road bike utilizing parts available on the market to achieve a gear range that was comparable to a 50/34 crank with an 11-28 cassette. Our goal was to lay the groundwork of what a future single-chainring road bike system might look like, and highlight the different set of challenges compared to its use on the ’cross scene. Since 11-tooth and 32-tooth cogs are currently the smallest and largest cogs found on a road cassette, we had to get creative in how to achieve the gear range needed for a successful road bike application. [Editor’s note: At press time, SRAM introduced an 11-36 cassette]. Mountain bikes have had a couple of years to perfect their single-chainring setups, so we decided to see how much crossover there could be. After some exploring, we came up with two potential options for the cassette.

Option 1: Build a wheel using a hub with SRAM’s XD driver body from the XX1 group. The XD driver body allows a 10-tooth cog to be used, which isn’t possible on a standard freehub body. Unfortunately, the only cassette option available is a 10-42. If we could get a 10-34 spread, then we could run a 36-tooth chainring to find the ideal range. However, since we can’t get that cassette, we’ll move on to the next option.

Option 2: This one lets you use your standard road wheel with a 11-36 ten-speed mountain bike cassette and an add-on 40-tooth large cog from Wolf Tooth Components (www.wolftoothcycling.com). This is a bit of mix and- match setup, where you can pull out either the 15- or 17-tooth cog from the middle of the cassette in order to add in the 40-tooth as the new low-end gear. Obviously, an 11-40 ten-speed cassette is going to have some substantial jumps in teeth between gears, and we’re not saying it’s perfect; rather, it’s a starting point for what’s coming down the pipeline.

UP FRONT
Since we’re stuck with an 11-tooth cog as the smallest cog we can use, the chainring size needed to be a 50-tooth at the minimum in order to provide enough top end for racing or fast group rides. Luckily, Wolf Tooth Components had just the chainring we needed. It uses a similar tooth profile to SRAM’s X-SYNC design to help keep the chain in place. Using our 11-40 cassette, we’d even have the option of jumping to a 52t chainring since a 52×40 low gear would be the equivalent of a still very manageable 34×26 combination. If you fancy yourself a strong climber, you could also get rid of the 40t add-on cog and instead run a 50×36 as the lowest gear, which is equivalent to a 39×28.

Another consideration we had to make in the build was going to be rear derailleur compatibility. We’re using cogs that are much larger than the max capacity stated by SRAM for their road derailleurs, so a mountain bike derailleur is probably the answer. But, is a Type 2 clutch-style derailleur (such as the Force CX1) necessary on the road? We shall see. As we’ve found so far, there are always solutions; it just takes a little extra digging to find them.

BIKE OF THE WEEK: VIELO R+1