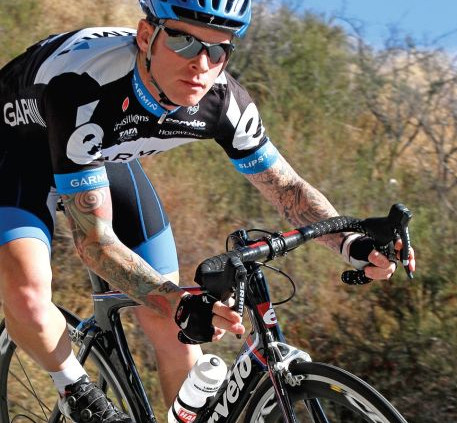 Share
The wild-looking S5 was first unveiled to the public just days before the 2011 Tour de France commenced in early July. This was the latest example of radical design coming from the Gerard Vroomen/Phil White Design team, who also brought us the equally sensational looking P4 TT bike-and that’s exactly where the S5 frame borrows some of its design cues from. In the most simple terms, this new Cervelo is but the latest aero road bike (following the Specialized Venge) to hit the consumer market, with a bevy of top-notch race wins to its credit.
Price: $6400, ($3800 frame, fork and seatpost)
Weight: 15.8 pounds
Sizes: 48, 51, 54 (tested), 56, 58, 61cm
www.cervelo.com 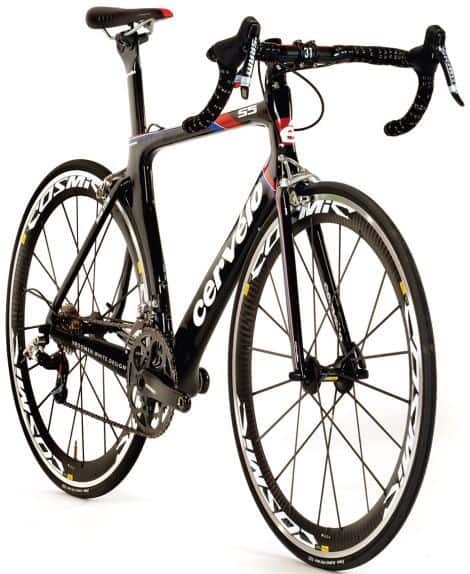 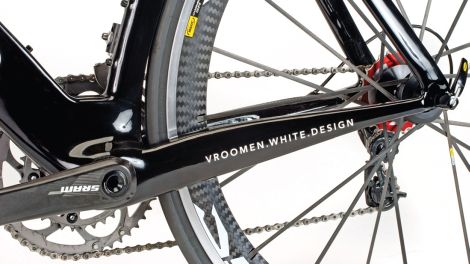 WHAT’S SPECIAL ABOUT THE FRAME?
The S5’s dramatic airfoil tube shapes make it look like it’s missing something- like aero bars. Cervelo’s second-generation aero road bike’s entire premise is about reducing its wind resistance-not only on the frame, but across the entire bike. In order to do this, the seat stays are oriented to shield the wind over the rear wheel and reduce turbulence. The downtube is what Cervelo calls ‘dropped,’ and it extends from the headtube below the fork crown in order to smooth airflow across the rest of the bike. Additionally, the rear wheel tucks into the heavily aerodynamic-extended seat tube, which is a design borrowed directly from their P4 time-trial bike. These features add up to a claimed 32-watt savings in wind-tunnel testing versus a non-aero road bike.
The S5 boasts an overall stiffness increase of 12 percent over their own World Championship-winning S3. This is due in part to the BBright bottom bracket, which is 11mm wider than a BB30. The wider bottom-bracket shell allows for a massive junction of carbon where the seat tube, downtube and chainstays join. 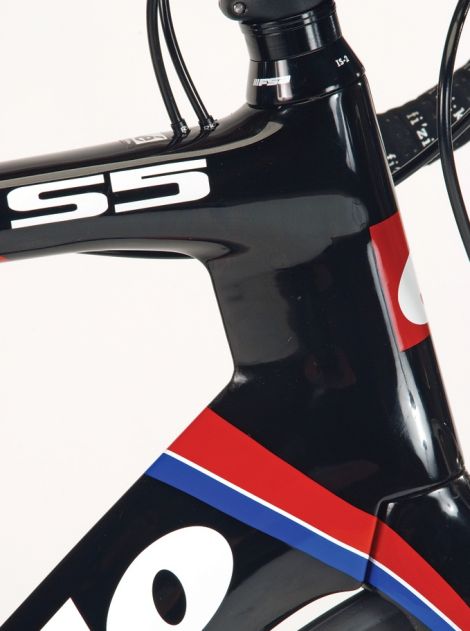 WHAT ABOUT THE COMPONENTS?
Other than a SRAM S-900 compact crank replacing the Rotor, our S5 Team came with a nearly identical build to that of the Garmin-Cervelo Team bike that snagged two Tour de France stage wins. The Mavic Cosmic Carbone wheels are definitely one of the component highlights of the build. Their 52mm rim depth complements the frame’s extreme aerodynamic features, making it look like it’s going 50 mph while standing still. 3T’s Ergonova carbon handlebar is another favorite due to the comfortable, flat top section.
Cervelo’s aero seatpost, which features two saddle setback options, is in theory a great setup-but it’s poorly executed. In order to adjust the saddle fore-aft or tilt, you need to have two 5mm wrenches, one for each side of the double-headed bolt. This makes roadside adjustments far from practical since not many people carry around two wrenches while riding. But, the seatpost woes are nothing compared to those caused by the seat-clamp wedge, which is recessed into the frame in front of the post. The only thing holding the wedge in place is the post, so when the post is taken out, the wedge falls straight down the seat tube-very frustrating (the screw is still lost in our frame)! 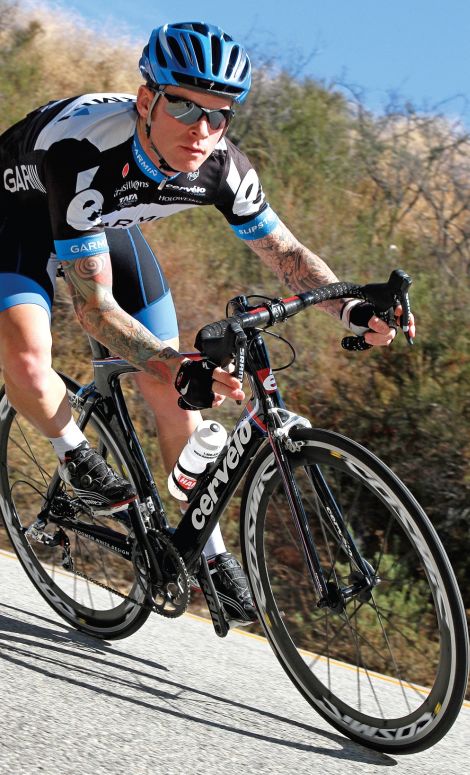 WHAT ABOUT THE RIDE?
We’ve always been told not to judge a book by its cover, but with the S5, it was tough not to, given the bold, in-your-face appearance of what we thought would be harsh-riding aero tubes. While it’s no RSL, or Evo, it made us put our foot in our mouth with a ride quality that surpasses the rest of the aero roadies on the market. Looking down on the slender profile of the fork, head tube and downtube gives a mental boost, secure in the knowledge that you’re cutting through the wind on a razor’s edge. Taking the S5 on the flat, windswept roads toward the coast had us with our chin to the stem looking for every bit of speed as we envisioned holding off the charging pack in our own personal time trial- we won, of course.
With a frame that uses nearly twice the amount of carbon as the Evo or Ultralight, it’s not surprising that it’s stiff enough to be more than just a flatland bike. While the BBright bottom-bracket junction looks to contain enough carbon for an entire Boeing Dreamliner, it does set the stage for the S5’s impressive lateral stiffness, giving it the ability to tackle undulating terrain with ease.
WHAT ABOUT THE LOOKS?
If you don’t have anything nice to say, then don’t say anything at all-that’s what our mothers have been telling us since childhood. Try as we might to find something positive to say, we cannot; it’s just plain ugly. Good thing performance and good looks are not one in the same. 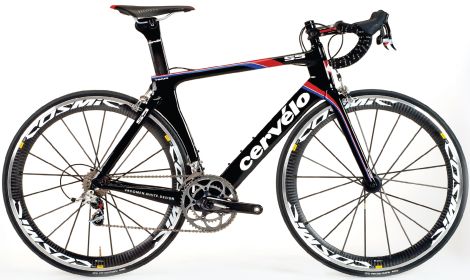 SO WHAT’S THE VERDICT?
The S5 may well never win a beauty contest, but what it can win (and has) are bike races. It’s the heaviest of the bunch at 15.8 pounds, but its bulk serves a greater good-performance. Taking on the aero road category that Cervelo helped start, the S5 does raise the bar in aerodynamics and stiffness. But as good as it is, it still doesn’t quite provide the best of both an aero road and a standard road bike. The added heft is enough to dissuade the climber types that pride themselves primarily on stopping the clock at the top of the climb rather than breaking PR’s in the lowlands.
Ideal buyer: The hammerhead that has a phone app to figure out the wattage savings of a 1-inch reduction in frontal surface area.
The only true ‘specialist bike’ in the test; the Cervelo S5 does everything well, with the exception of slicing through the wind-it does that extraordinarily well. If this was an aero bike shootout, there’s little doubt it would be on the podium’s top step. On flat to undulating terrain, the S5 takes the cake. But, for those of us that like to have a healthy amount of climbing in our ride diet, there are better choices.