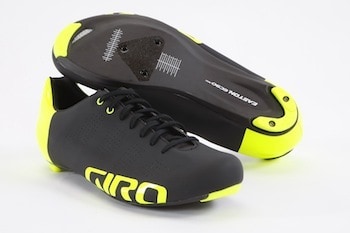 Giro boasts a long history of innovation and trend-setting when it comes to cycling products, and that history has only expanded in recent years thanks to the likes of the brand’s New Road casual clothing and the aero road Air Attack helmet. Now Giro has taken a step forward in its footwear line by stealing a glance back toward the past to a time when notions of Velcro straps and Boa dials were the stuff of futurists and crystal balls. By melding a lace closure with modern accoutrements, Giro has unleashed the Empire ACC (Advanced Carbon Composites). 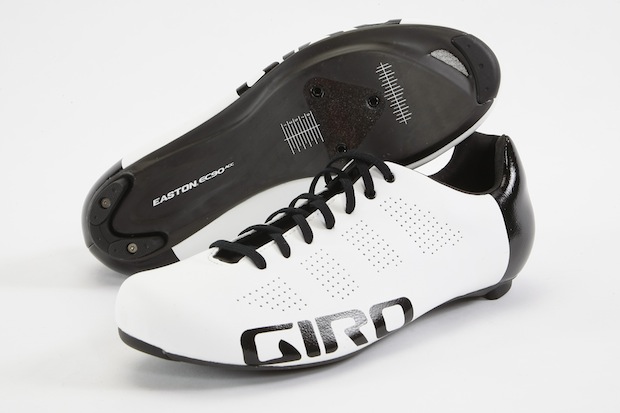 THE TECH
Since Giro first unveiled its line of road footwear back in 2010, models like the Prolight and Factor have become popular choices in the pro peloton and bike shops alike. But what was missing from Giro’s line was a truly lightweight offering to rival the likes of the Mavic Huez and the Bontrager RXXXL. In its search for the latest lightweight materials, Giro’s footwear designers realized that laces, which had gone out of fashion in recent decades in favor of more adjustable closure options, never actually lost their ability to hold feet securely in place and, by and large, added fewer grams to shoes than most ratcheting buckles.

Built around the same Easton EC90 ACC carbon fiber outsole that’s also found on the $300, high-performance Factor, the Empire ACC is intended to be as friendly to recreational riders as full-on racing types. The one-piece upper is composed of Giro’s supple and thin Evofiber synthetic material and features a mass of perforated holes for airflow. There are seven lace holes spaced closely together on either side of the foot to allow for a tight fit. And the Empire ACC comes with Giro’s signature SuperNatural Fit kit insole, with adjustable arch support pieces that can be swapped out for a custom fit. The Empire ACC is available in white/black, black/red, black/green and solid black schemes. 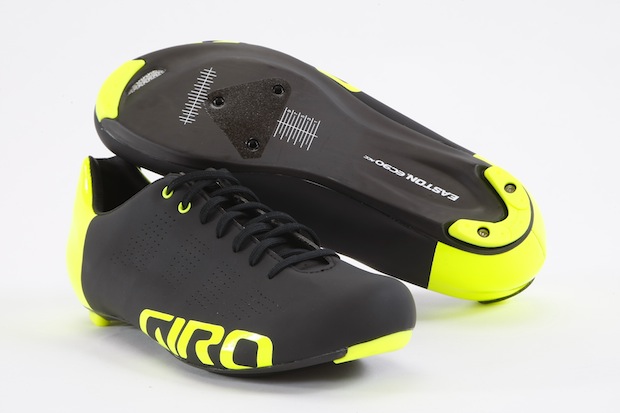 THE RIDE
Pro athletes seen riding the Empire ACC this season include Taylor Phinney and Bradley Wiggins, so it’s no surprise that the shoes have plenty of stiffness. Likewise, our test riders were never left wanting for more stiffness during our fastest group rides and crit training practices. The overall fit is quite streamlined, and the supple synthetic upper hugs the curves of your feet very well without any break-in period. But we found the toe box area to be quite wide, which worked well for most of our test riders and was deemed acceptable by the rest.

At just under 500 grams for the pair (size 44), the Empire ACCs aren’t quite as light as the aforementioned options from Mavic (353 grams) and Bontrager (407 grams), but their respectable low weight is welcome nonetheless, especially because shoes count toward rotating weight, which has a bigger impact on overall performance than, say, a lighter stem. Ventilation was about average compared to other shoes in the Empire ACC’s price range. Because the lace holes are spaced close together and the laces themselves are made of a rather durable synthetic blend, there’s lots of potential for tying them very tightly for a super-snug fit.

Giro even added an elastic tab on top of the tongue for the lace loops to reside under, thereby preventing them from flapping in the wind. And our testing saw zero instances of the laces coming undone, and only after several hours in the saddle did we detect some loosening. The only negative aspect of the lace system is that, unlike a Velcro strap or Boa dial, it’s impossible to adjust the tightness of the fit on the fly.

THE VERDICT
Although the Empire ACCs may seem antiquated to some, we’re fans of its lacing system, which holds your feet securely in place and serves up some style to set them apart from the myriad of ubiquitous straps and buckles of nearly every other road shoe. You give up closure adjustability for that style, however, but the Empire ACCs try to make up for that with an overall light-weight, stiff chassis for high-performance riding and a comfortable, supple fit. Giro has also expanded its collection of lace-equipped shoes to include the Republic, a more casual-looking model aimed at commuters that features a two-bolt SPD-style cleat mount and retails for $150.