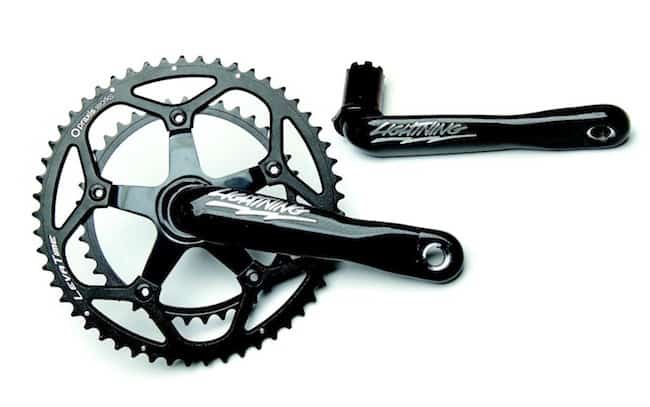 Inspiration for product development can come from many unlikely sources, which was definitely the case with the Lightning cranks. Tim Brummer was a custom recumbent fabricator, and one day he was musing over the weight of the cranks on a recumbent he had just finished. Since the are located at the very front of a recumbent, their weight is much more noticeable than on a regular bicycle. ‘The cranks must’ve weighed more than the frames I was making, so I thought I could do better than what was available at the time,’ he explained. In 2000, Brummer teamed up with an aerospace engineer, and together they created a crank well ahead of its time in a market that was made up of mainly aluminum crankarms with square-taper bottom brackets.

TECH
If the Lightning crank looks vaguely familiar, it’s because of its close resemblance to the Specialized FACT crank. No, Lightning didn’t rip off Specialized’s design. The small manufacturer designed and built the cranks, which Specialized later bought the patent to, and now Lightning has a licensing deal with the ‘Big S.’ Although the cranks have undergone a few small changes since their initial development a dozen years ago, they, like the originals, are made right in Lightning’s own facility in Lompoc, California. Company owner Brummer wasn’t willing to divulge many specifics of the actual production of their cranks, but regardless of the exact methods of creation, they end up being some of the lightest production cranks available due to their hollow-carbon arms bonded to an aluminum 30mm-diameter spindle. The spindle uses a similar design to Campy’s Ultra Torque cranks, which have half of the spindle attached to each arm and use a single oversize titanium bolt to integrate both halves together in the spindle’s center.

The Lightning crank’s low weight is a big selling feature, but by no means is it their only one. Options galore ensures that Lightning has a crank for you. Using one spindle length, Lightning makes numerous different bottom bracket cups to accommodate just about every frame out there, including 68mm, BB30, OSBB, BBRight, 386EVO, BB86 and BB91. And that’s only the beginning of the options; a removable aluminum spider comes in either compact (110 BCD) or standard (130 BCD) gearing, in addition to 12 crank lengths ranging from 160mm to 190mm. Different-length left and right arms are also available for those with leg-length discrepancies. The cranks also come sans chainrings for $700, or in three different chainring options: Extralight for $990, TA for $880 and Lightning 7075 for $780. Our test model came without chainrings, so we mounted a pair of 53/39 Praxis Works forged rings, which brought the total crank with chainring weight to 517 grams.

THE RIDE
We replaced a pair of SRAM Red BB30 cranks for our Lightnings. Since the cranks only come in one spindle length, the existing bearings had to be removed and replaced with the included cups, which widened the BB30’s 68mm shell to a standard 86mm width. After a front derailleur limit-screw adjustment, we were out on the road. Although the Lightning cranks weighed 110 grams less than the SRAM Red, the difference in weight was not something that was noticeably apparent when pedaling, nor was any difference in stiffness or lack thereof.

The cranks were sufficiently stiff in comparison to other carbon cranks out there, but not at the same level as a pair of Dura-Ace 7900 aluminum cranks. As much as chainrings are the main culprit in shifting performance, a flexy spider can be the cause for even the best rings to underperform. This is not the case with the Lightnings. Their CNC-machined spider was laterally stiff enough to handle
upshifts under power without deflection.

THE VERDICT
Lightning cranks are a good, American-made option (there aren’t a lot of homegrown cranks anymore) if you’re planning a lightweight project build, and they will almost surely be compatible if you want to switch out frames down the road. No, they don’t come cheap (once you factor in a set of chainrings), but compared to a pair of Specialized FACTs at $600, Dura-Ace 7900s at $660 or FSA K-Force Lights at $750, which all weigh more than the Lightning cranks, they’re not out of the ballpark. A ceramic-bearing option is available for an additional $65, in addition to an aerodynamic carbon spider for the time trialist looking for a few seconds of time savings-it will set you back another $100. With a 100-kilogram (220 pound) weight limit, the Lightnings are out of reach for bigger riders.

Rodriguez On Top Of The World

WHAT IS SRAM XPLR?