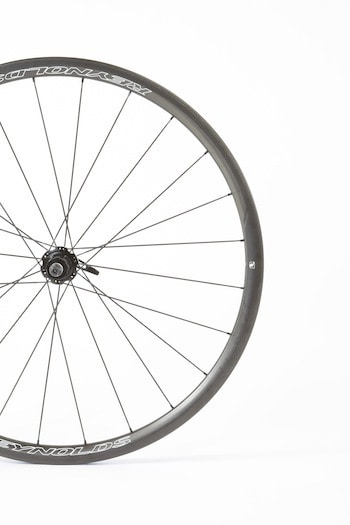 When it comes to wheels, Reynolds Cycling is an industry leader. Offering no fewer than 16 distinct wheel models, the Utah-based company makes available an even greater number of complete wheelsets, thanks to several mixed depth sets of certain models. And while Reynolds offers a full line of low-cost aluminum hoops, the brand’s expertise lies in the world of carbon fiber, with its Performance line of carbon clinchers being one of the most popular in the company’s history. For 2014, Reynolds has updated its Performance line significantly, taking advantage of recent trends in both carbon wheel design and subsequent aerodynamic advancements in rim shaping.

THE TECH
Each wheel in Reynolds’ Performance line of carbon clinchers has undergone some major changes for 2014, the most significant being that they’ve all been made a bit wider and a touch shallower. The latest Attack continues its role as the Performance line’s shallowest and lightest wheel. The previous iteration measured 32mm deep with an external rim width of 21mm, whereas the newest version now measures 29mm deep by 25mm wide (with an internal rim width of 17mm). Reynolds says that by tweaking these measurements and the overall rim profile, this latest crop of hoops offers better handling capabilities, thanks to the shallower depths, yet are even more aerodynamic than the previous generation due to the new shaping.

The carbon rim features Reynolds’ latest CTg braking surface treatment, which, when combined with either the brand’s proprietary Cryo Blue pads or new, larger Cryo Blue Power pads, provides the most advanced braking performance that Reynolds has ever developed for carbon wheels. The Attack wheels are laced to simple, proprietary hubs with DT Aero Comp straight-pull spokes. There are 20 spokes on the front wheel in a radial pattern, while 24 spokes on the rear wheel in a radial (non-drive side) and two-cross (drive side) mixed pattern make up the overall spoke configuration. Despite the Attack wheelset’s shallow depth and relatively low 1355- gram weight, there is no rider weight limit. Also, the new Attack wheels feature external spoke nipples, whereas the previous version had internal nipples.

This means that the wheel can be trued and/or serviced without removing the tire as on the previous iteration. The other two wheels in the Performance carbon clincher line are the Assault SLG and the Strike SLG, both of which feature Reynolds’ signature Swirl Lip Generator, a 3mm-wide raised ridge that circles both sides of each rim just above the nose, which aids in aerodynamic efficiency (the Attack does not feature a Swirl Lip Generator because its aerodynamic benefits would be negligible on a such a shallow wheel). The Assault SLG and Strike SLG measure 41mm deep by 25mm wide and 62mm deep by 25mm wide, and they retail for $1800 and $1900, respectively.

Road comfort
The Reynolds Attack wheels are some of the shallowest carbon clinchers we’ve tested, and we found their ride quality to be among the smoothest. They don’t have quite the same amount of vertical compliance as most comparable box-aluminum clinchers, but they still make for a great wheelset that can be ridden all day in a variety of conditions. A bonus to this pleasant ride quality is a surprising amount of lateral stiffness relative to any type of wheels with a similar depth.

Climbing
For smaller- to medium-sized riders, the Reynolds Attack wheels are some of the best climbing companions we’ve come across in the sub-$1600 price range, and they’re better than a wide swath of more expensive alternatives. Their 1355-gram weight certainly attributes to this, but the Attack wheels are also quite stiff for their depth, a key aspect for quick accelerations and hard, steady efforts up steep grades. Windy conditions Thanks to their shallow, 29mm depth, the Attack wheels handle splendidly in windy weather. Even our smallest test riders encountered zero troubles when riding the Attacks in blustery conditions.

Cornering
From tight, technical, low-speed turns to high-speed, swooping mountain descents, the Attack wheels corner very well compared to wheels of similar weight. But at 1355 grams, they don’t have the mass to make them stick to the road as well as a heavier set of wheels. Most cyclists, however, will be pleased with the cornering and descending abilities of the Attacks.

Braking
As far as carbon braking surfaces go, Reynolds wheels and the brand’s proprietary Cryo Blue brake pads have made for a great combination, even if they’ve never quite fully bridged the gap to an aluminum braking surface. But that gap has narrowed significantly with Reynolds’ new Cryo Blue Power pads, which are 44 percent bigger than the standard Cyro Blue model. Even on some white-knuckle descents in California’s Santa Monica Mountains featured in the Amgen Tour of California, we found the Attacks and new pads to offer a terrific stopping power and plenty of modulation.

Durability
We’ve experienced mixed results in the durability department when it comes to the various Reynolds wheels we’ve tested over the years. But after touring the company’s new headquarters last year and testing some of its latest offerings, we’re confident that the Attack wheels will give you a long life of service. Despite plenty of hard rides and fast descents during our testing period, we have no concerns about the Attacks’ ability to dissipate braking heat and perform as intended.

THE VERDICT
If you’re looking for an all-around set of carbon clinchers, then we recommend checking out the Reynolds Attack. Bigger riders may wish to seek out the brand’s Assault SLG or Strike SLG models, which should be a bit stiffer thanks to deeper profiles with an added benefit of better aerodynamics. But for $1575, the Attacks are a terrific option for smaller- to medium-sized cyclists looking for something that rolls smoothly, climbs exceptionally well and won’t break the bank. As far as warranties go, Reynolds has created its Reynolds Assurance Program (RAP), which includes two avenues of protecting your wheel investment.

The first is a two-year warranty that covers manufacturer’s defects, yet is only available to the wheels’ original owner. The other avenue is a crash-replacement program, available to even secondhand purchasers, which allows owners to send in their wheels for a discounted repair or replacement in the event of damage caused by a crash. Prices vary based on the specific wheel model and the required replacement parts, starting at a few hundred dollars for the Performance line.

Dirty Kanza Is On – Well, Virtually