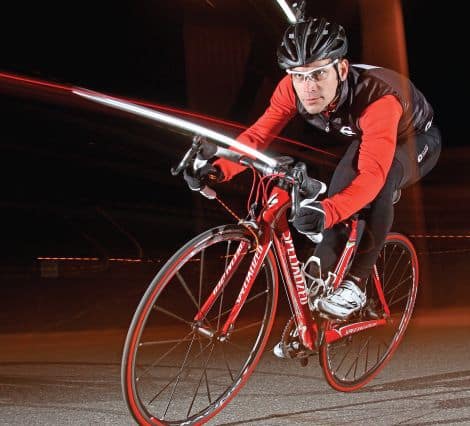 Share
When riding at night, always make sure you can see and be seen.

Have you ever woken up early for a ride only to discover the sun hasn’t risen with you? Or have you ever been on a ride and told yourself, ‘Just a few more miles,’ only to find that the sun is setting faster than you can pedal? For safety’s sake, we don’t recommend riding extensively at night or during low-light hours of the day. But if you find yourself out past dark, taking part in a local after-hours crit or commuting home after a long day at the office, a set of lights will allow you to ride longer, be safer and open up a whole new world to your cycling experience. But first, here’s what you need to know before heading to the bike shop.

WHAT’S A ‘LUMEN?’
Bicycle light companies tend to measure their product’s power output in lumens. A lumen is part of the International System of Units and is a measurement of luminous flux. For practical purposes, it’s a measurement of the total amount of visible light emitted by a source, the ‘source’ being your bicycle light. Because a variety of factors go into determining the amount of lumens that a bicycle light produces, it’s best to check out your local bike shop’s selection of lights to get a sense of what 300 lumens looks like.
TO SEE OR BE SEEN
Bicycles lights can be broken down into two general categories: headlights that let you see, and taillights that let you be seen. Proper headlights are usually high-powered lights with at least 150 lumens of power output or more.
‘Lights that let you see are for your rides that begin well after the sun has gone down, and illuminating the road is your top priority,’ says Blackburn’s Jeff Titone. ‘Conversely, if your rides are primarily during the dawn or dusk hours, or on city streets, then visibility to automobiles is more important.’
The lights that let you be seen are typically more compact than the high-power headlights intended to help you see. ‘Be seen’ lights, also known as ‘safety’ lights, often produce far less power output, usually in the range of 20?100 lumens, and can often be found in a variety of colors. A standard setup of ‘be seen’ lights includes a white light up front and a red light on your rear, either on your seatpost or worn on the back of your helmet.
But don’t stop there. The more lights you have on yourself and your bike, the easier you’ll be seen. Also, note that most lights, whatever their intended purpose, typically have at least two modes of operation; ‘constant’ or ‘steady’ modes provide a continuous beam of light, while ‘flashing’ or ‘blinking’ modes produce a strobe-like effect, which is often more visible to motorists.
CHARGE IT
Whether you’re in the market for ‘to see’ or ‘be seen’ lights, you’re going to need a power supply. Two schools of thought dominate this area as well, with most lights utilizing either disposable or rechargeable batteries.
‘Even a simple, inexpensive ?blinky’ light can add a great deal of safety in low-light situations,’ says CatEye’s Bill Peck. ‘These inexpensive, blinky-type lights typically run on disposable batteries, like our CatEye Loop safety light, which provides up to 30 hours of run time in a constant mode and 50 hours in flashing mode.’
Most rechargeable light systems utilize micro-USB ports on the light bodies, which can be plugged into your home computer or laptop. Most manufacturers have found this system to be more user-friendly and efficient than having to plug your light into a wall socket for a charge. And while most rechargeable light systems involve an internal, fixed battery within the light body, some companies offer other alternatives. ‘Our lights use a USB-rechargeable battery that can be replaced,’ says Lezyne’s Patrick Ribera-McKay. ‘We call it ?infinite light.’ Additional batteries can be purchased separately for our three light options. So if you forget to charge your primary battery, you can swap it out for a fully charged one.’
MOUNT UP & ACTIVATE
‘Different lights are designed to attach to different parts of your bicycle, from handlebars to fenders, seatposts to bags,’ says Titone. ‘Some even attach directly to your clothing.’
‘Mounting flexibility is definitely key when selecting a light,’ says Sigma’s Gindi Orloff. ‘This includes looking at things like helmet- or handlebar-mounting options, the weight, size and profile of the light, as well as the light’s ease of operation. For example, consider whether or not the light’s buttons are easily accessible, or whether or not you’ll be able to operate your light while wearing winter gloves.’
In a perfect world, cyclists would always be easily visible to automobiles. But the reality is that during any time of day, particularly during hours of decreased visibility or at night, a cyclist is difficult to spot for a passing motorist. So do everyone a favor and get some lights-be seen and be safe.

SEVEN LIGHTS FOR YOUR CONSIDERATION… 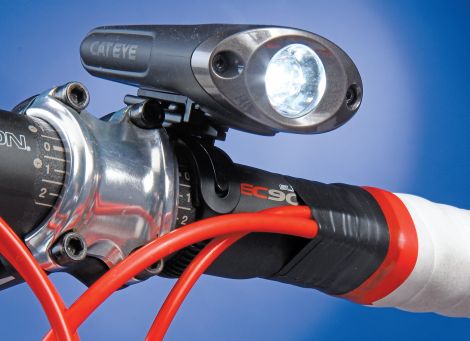 CATEYE NANO SHOT
CatEye’s latest headlight produces up to 250 lumens in its high-power setting, 140 lumens in its lower setting, and it includes a flashing mode. It can be recharged via your computer’s USB 2.0 port in a little over three hours, but perhaps its best feature is its ultra-wide beam, capable of lighting up a sizable chunk of the road ahead of you.
Price: $100
www.cateye.com 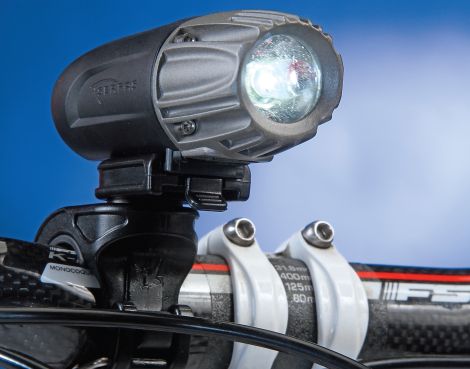 SERFAS TRUE 250
The True headlight from Serfas features a 250-lumen output and a three-hour run time in its highest setting, a 50-lumen output and 15-hour run time in its lowest setting. It comes with mounting brackets for both helmets and handlebars and sports a weight of 150 grams for the light/handlebar bracket combination. A rechargeable lithium-ion battery can be charged via a wall adapter or USB cable, both of which are included. The True headlight is also available in a 500-lumen version for $150 and a 150-lumen version for $85.
Price: $110
www.serfas.com 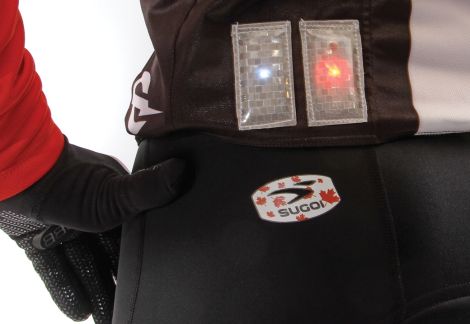 APALS-AIR LED STRIPS
APALS-AIR stands for All-Purpose Adhesive Light Strip with Active Illumination Technology. Easy to use, inexpensive and effective, these lights are comprised of an LED light bulb housed inside a 1-inch by 2.5-inch plastic housing with a sticky backing that can be applied to virtually any surface, such as a helmet, seatpost or jersey. Available in six bulb colors, APALS-AIR strips feature one steady and two flashing modes to help you be seen. After about 35 hours of run time, the bulb will die but you can pick up a pack of four replacement bulbs for $12.
Price: $10 (pack of two)
www.brite-strike.com 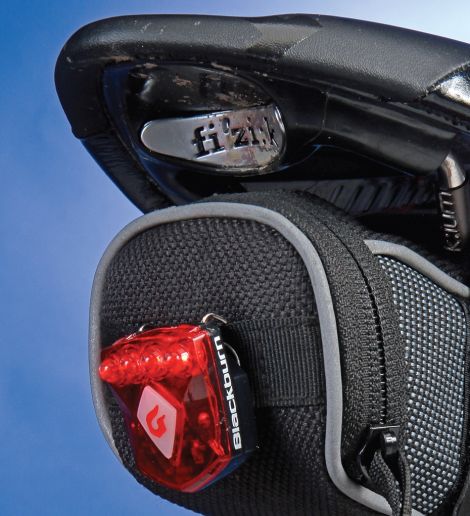 BLACKBURN FLEA 2.0 COMBO
The Flea 2.0 combo pack comes with both front and rear lights to help you be seen, while a magnetic USB charger plugs into your home computer or laptop. The Flea Front features four white LED lights that put out a total of 40 lumens in a steady mode for a three-hour runtime and a five-hour runtime in flashing mode. Four red LED bulbs light up the Flea Rear, which also sports both steady and flashing modes with six and 12 hours of run time, respectively. Color-coded indicator lights on the Flea give you a quick battery life reference, and flexible mounting systems can be installed on handlebars, stems, seatposts, saddle bags, and even clothing.
Price: $54.99
www.blackburndesign.com 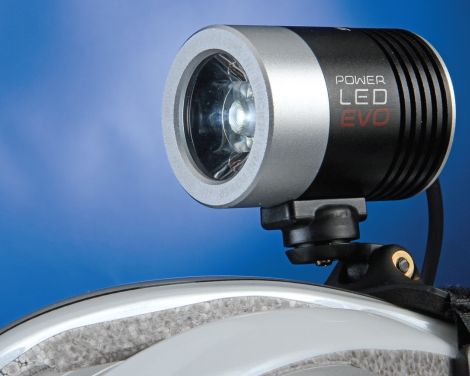 SIGMA POWERLED EVO
With 900 lumens on tap in its highest setting, the Sigma PowerLED EVO serves up some serious lighting power. With the supplied IION XL battery pack, you’ll get three hours of run time in the high setting, five hours in the medium setting and 11 hours in the low setting. Crafted in a water-resistant, aluminum housing, the PowerLED EVO also features a unique double-click power button that prevents accidental ignition. Both a handlebar bracket and a helmet attachment, as well as a bracket for the battery, come with the package to offer several mounting options.
Price: $249
www.sigmasport.com
LEZYNE MINI DRIVE
Although it’s the most compact model of Lezyne’s three LED lights, the Mini Drive still packs a punch with 150 lumens. It’s crafted with a CNC-machined aluminum housing, features a rechargeable lithium-ion battery, and comes with two plastic mounting brackets to fit 31.8mm- and 25.4mmdiameter handlebars. Available in black, gray and silver, the Mini Drive also features three steady and two blinking light modes.
Price: $69.99
www.lezyne.com 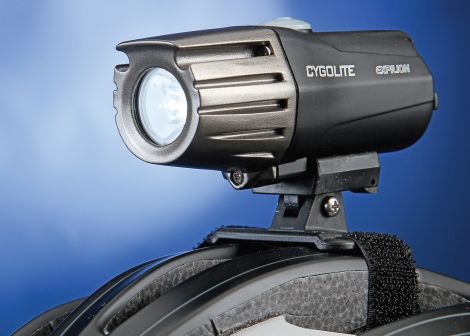 CYGOLITE EXPILION 400
Cygolite’s ExpiliOn produces 400 lumens from an LED bulb and features seven intensity modes, a low-battery indicator and an interchangeable lithium-ion battery system. Ideal for commuters and those who ride in lowlight situations, the ExpiliOn comes with a handlebar-mounting bracket, helmet mount and a charger that plugs into your computer’s USB port.
Price: $139.95
www.cygolite.com