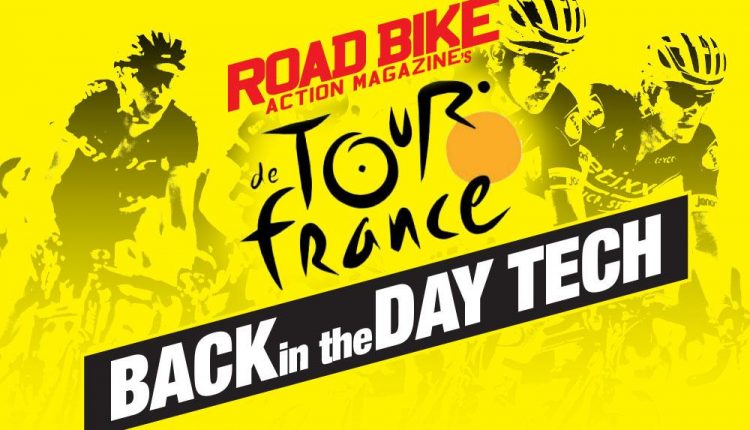 Here’s another installment of our Tour de France Back In The Day Tech that was put together in 2014 when the Tour started in England. There were massive crowds, glorious blue skies and plenty of meat pies to keep us well fed. For a previous BITD chapter, Click Here.

I have to say that the Yorkshire area has turned out of force to support the arrival of the Tour de France. Yellow bikes of every type are hanging everywhere, there are hand knitted jerseys flowing in the cool breeze and statues are now clothed in yellow jerseys. This is what the Tour de France is capable of doing – building passion and enthusiasm for cycling. Luckily, the Tour is  also capable of inspiring new bike design and technology, which is why we’re here today. 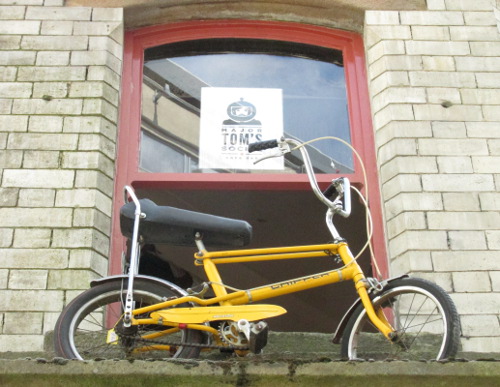 High tech in its day – sweet. 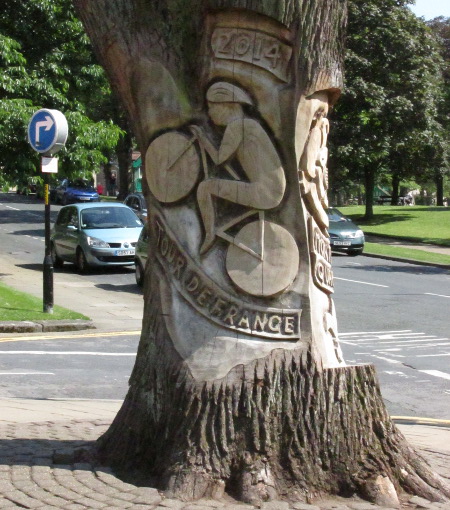 Not even the old trees are safe from Tour de France fever gripping the region. 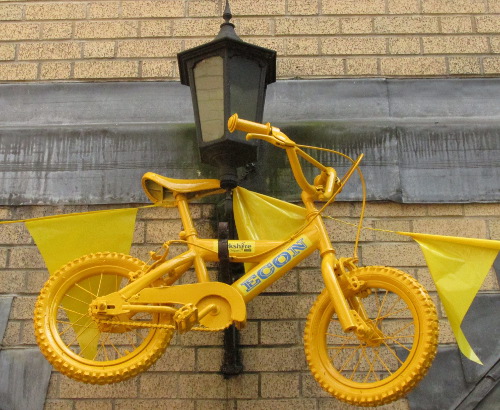 There’s probably not a rattle can of yellow pain to be found anywhere in the UK following Yorkshires Tour prep. 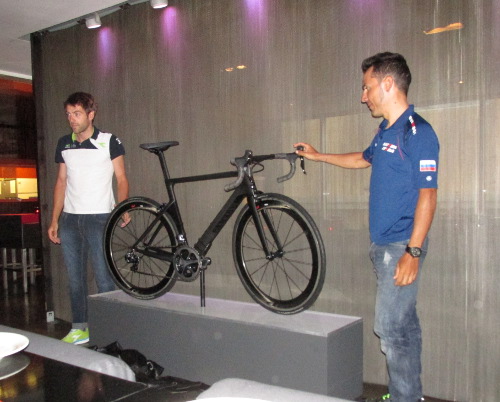 Movistar rider Alex Dowsett and Katusha’s Joaquin Rodriguez unveil the production version of Canyon’s new Aeroad at the Canyon dinner presentation. Yes, more black on black. If there was any reason to compel an American cyclist to either move to Europe or quickly befriend someone living there, it would be to have easy access to a Canyon – sadly, the consumer direct bikes are still not available in America. One look at the Aeroad and most people will probably feel that it’s more than just sad, no Canyons in America borders on the criminal! 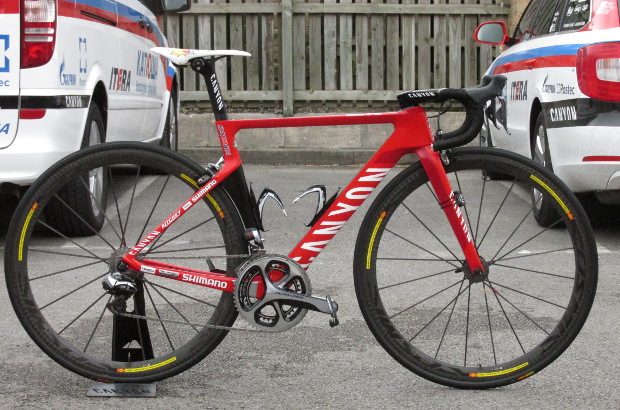 Canyon’s new Aeroad is simply a thing of aero beauty. Two years in the making, the new Aeroad frame hits the scales at a claimed 960 grams (140g less than its predecessor). Seemingly, not a single detail was overlooked in best ensuring the bike would follow in the footsteps of the first version which was used by Rodriguez to win the coveted WorldTour #1 ranking. The bike still uses the unique fork dropout with the adjustable rake. As is becoming increasingly popular, the Aeroad uses an internal seat binder. 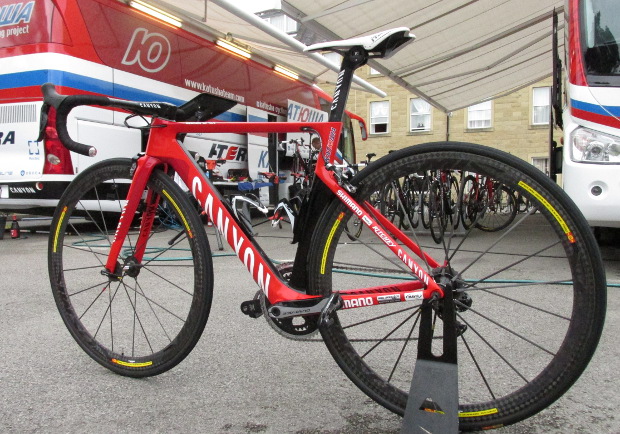 New Trident 2.0 frame shapes have a 2.6:1 aspect ratio and have increased the Aeroads aero effectiveness (19% watt savings) while also bringing the weight down and increasing stiffness. Canyon designers said their purpose with the bike was to break the link between values where aero conflicts with stiffness, weight and comfort.  The bike was based on lessons learned from the radical Canyon SpeedMax TT bike and the Ultimate CF road bike. “The future of aero is to account for all the interactions between the frame and rider.” 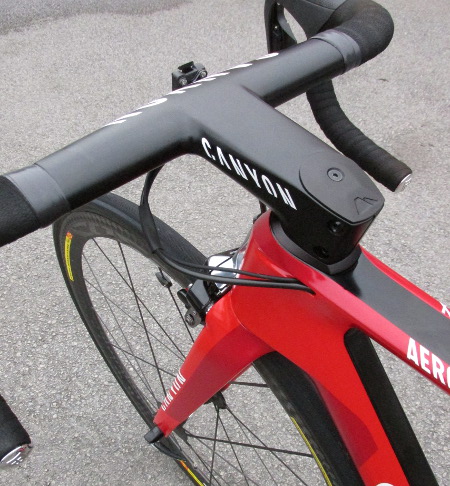 Like Trek, Canyon has also moved to a fancy one-piece bar/stem combo. Production versions of the  new Aeroad will come with either the one-piece style or a standard (pinch bolt) bar/stem, both which use a 1.25″ steerer. Unlike most brands that run small plastic plates to accommodate either mechanical or electronic cables, Canyon actually went to the expense of making two different frame molds to accommodate the different positioning. Wow! 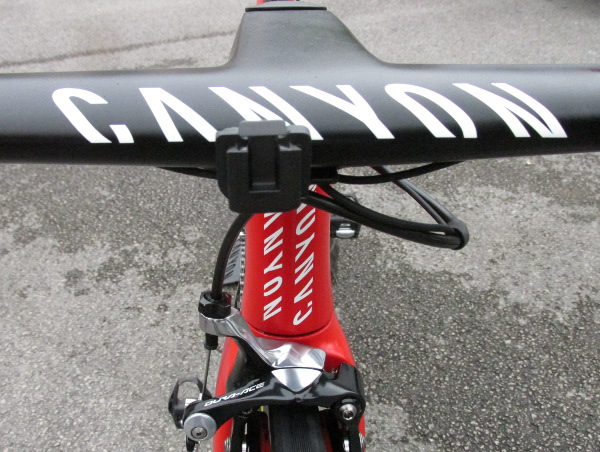 As in aero with the Di2 junction box tucked away in cut-away under the bar.  The handlebar was actually designed as an integrated part of the frame. There will be five lengths of stems and two widths of bars. Special headset bearings are used that are 30%  lighter and more compact to maximize the narrowness of the shapely headtube. 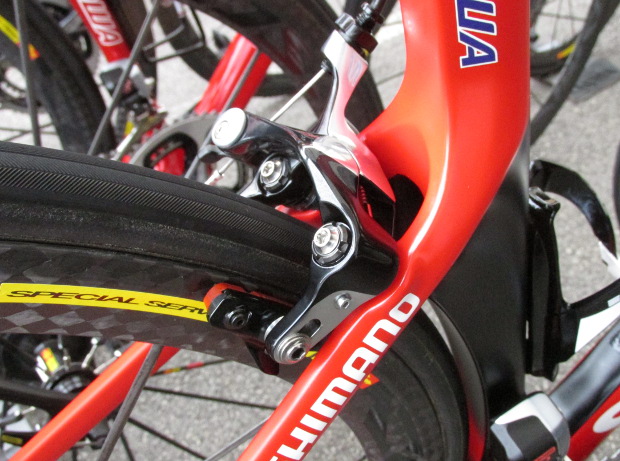 Interestingly, the Aeroad runs a pair of front Shimano direct mount brakes (the rear brakes get modified with front pad cartridges) with frame molding to not only accommodate the shape, but to also maximize their aero flow. That’s evidence of minding the details – impressive.  More interestingly still, the bike is dedicated to this brake set-up which means the Movistar bikes will be running non-branded Shimano brakes on their Campy sponsored bikes. 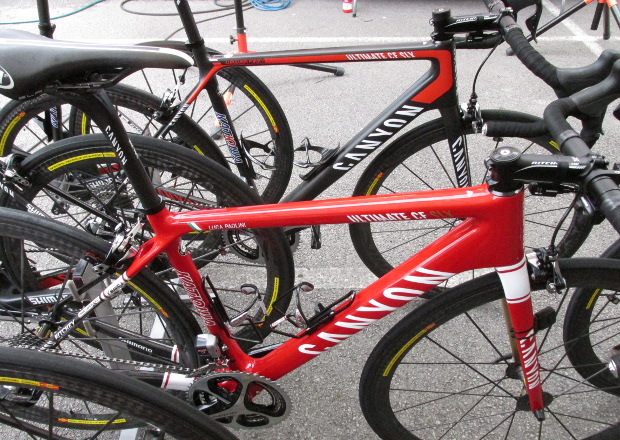 Other than the three red Aeroads, Luca Paolini is the only other rider to get a red bike with his Ducati inspired Ultimate CF. 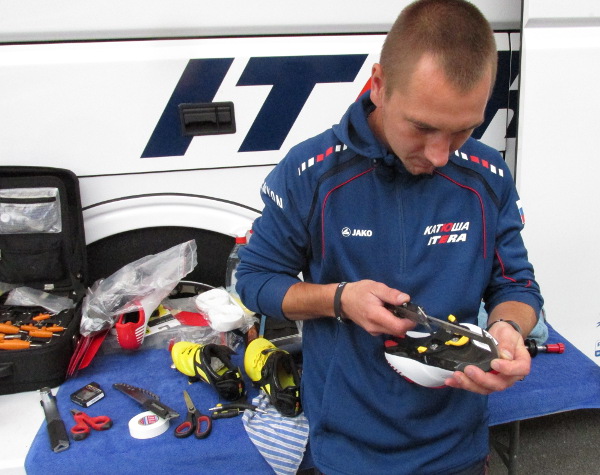 Using a micrometer to set the cleats…yes, they take it that seriously. 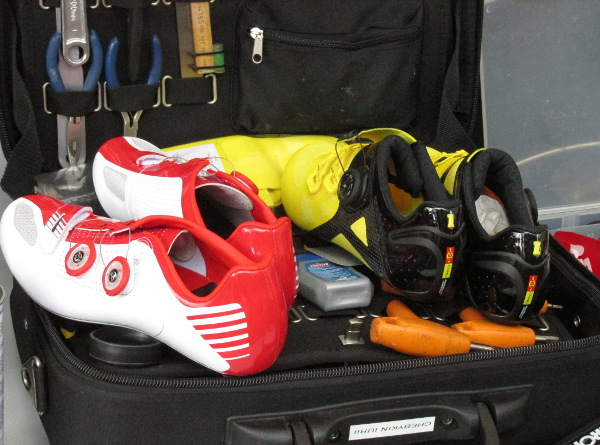 While Specialized has been using Boa enclosures for years, what is new here is the prototype Mavic shoe that also uses the wind-up enclosure. 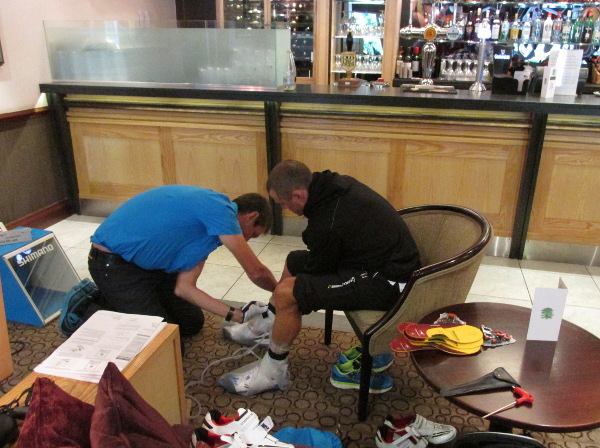 Speaking of shoes, Orica rider Simon Garrans got fitted for some new heat molded Shimano shoes in the hotel bar. 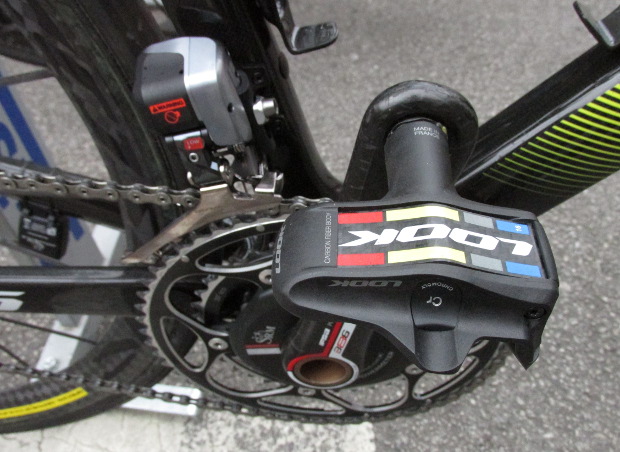 What other pedals would you expect to find on the Cofidis Look 695 team bikes, but the aero and light Keo Blade 2 pedal. 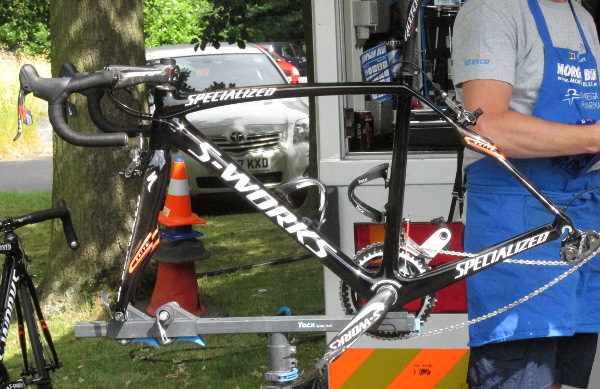 While not confirmed for use, it looked like a few teams were readying their compliant bikes for the cobbles found on stage five with Omega Pharma building up a handful of S-Works Roubaix frames with newly highlighted Zertz inserts. 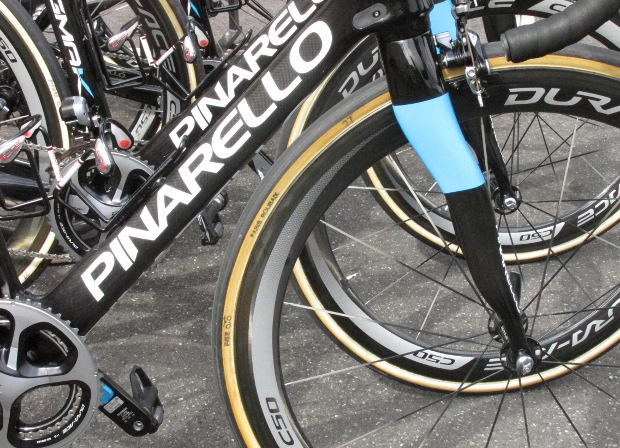 Another example of the pre-cobble prep was the row of Dogma K Pinarellos over at the Sky camp that were fitted with Paris-Roubaix tires. As the team was headed out to the team presentation the cars were stacked with the new F8 aero road bikes. 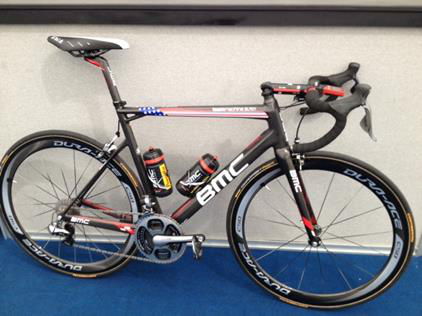 MEANWHILE, OVER IN HARROGATE 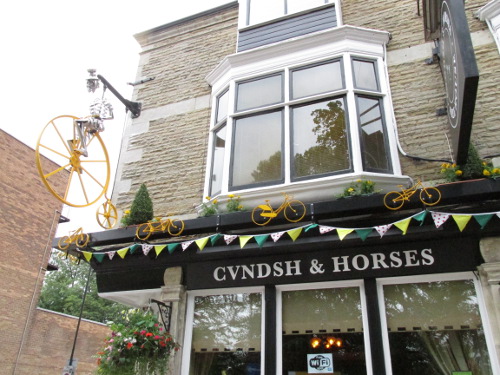 Harrogate is the finish town for stage one and it made famous for various reasons, one being it’s the hometown of Mark Cavendish’s mom…and this Cavendish themed pub. 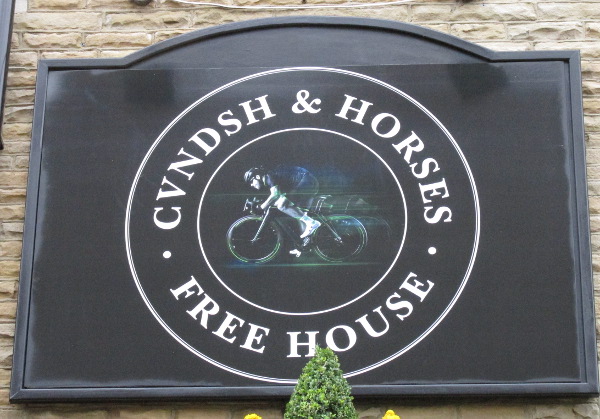 WHAT ABOUT STAGE ONE? 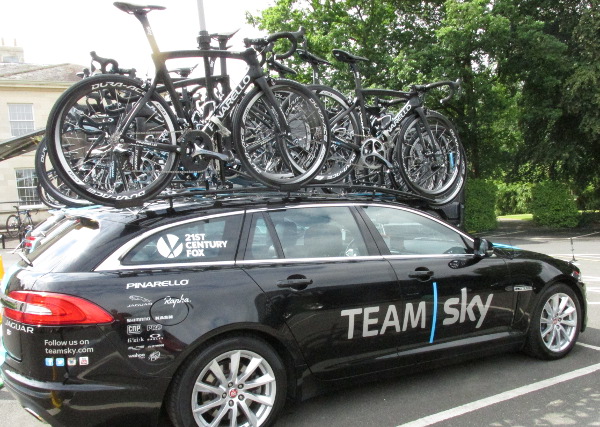 THIS IS A REALLY COOL VIDEO FROM TEAM SKY