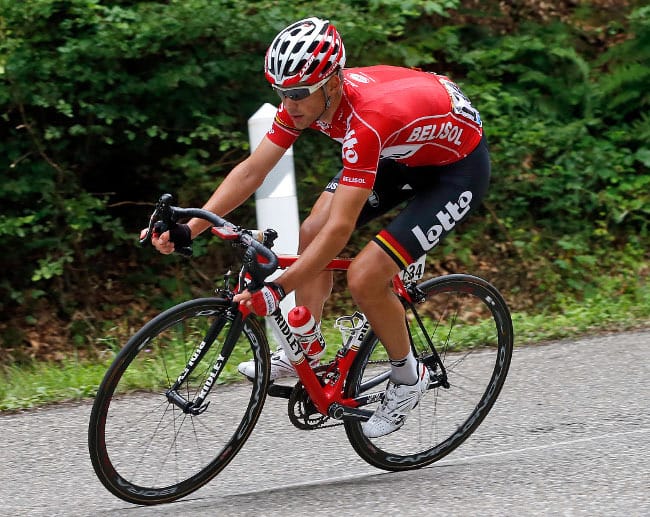 Lotto-Belisol is a Belgian team that has long been the home of German sprinter Andre Greipel and the Belgian brand of bikes, Ridley. The first week of this year’s Tour provided Lotto with much to celebrate; first came Greipel nabbing his sixth career stage win on stage 6, but next came French rider Tony Gallopin delivering the yellow jersey on stage 9 – the eve of Bastille Day! 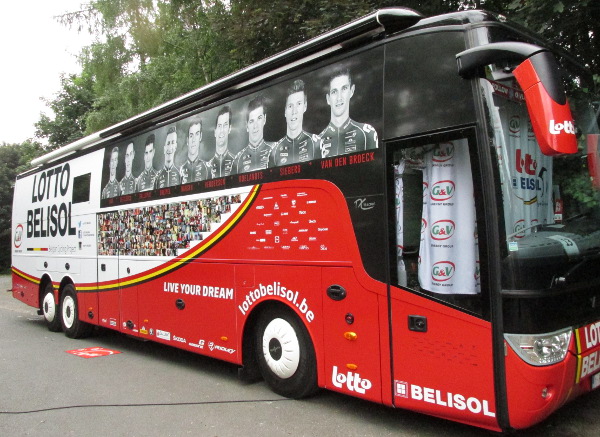 Lotto-Belliso is ranked 16th on the UCI list of Pro Tour teams. 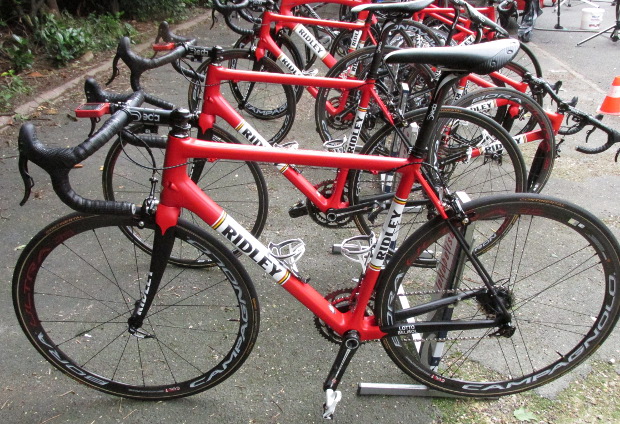 As far as we could tell, there wasn’t anyone who thought the new bright red Tour de France paint schemes looked anything less than brilliant with their use of old-school version frame panels. The riders have two bikes to choose between; the Helium SL and the Noah.

Alexander Torelli, head of design at Ridley Bikes on the Tour de France livery:
“I wanted this design to be a harmonious blend of retro and modern touches. It was a challenge to make a retro design for a modern carbon bike. The tube shapes we use now are very different from the steel tubes they used in the past. Therefore, this is my modern take on a retro design.”

“Because we designed this for the Lotto-Belisol team, I found some inspiration in their cycling kit. The red color and Belgian flag are an obvious reference to the jersey, but there also are more subtle references. On the top tube you can read “ride your dream”, referring to the “live your dream” slogan the team is using.”

“The black paint on the frame covers the more modern parts, and are designed to resemble the “lugs” that were used on steel frames to connect the tubes. We chose for a matte clear coat finish which is lighter, but in my opinion also looks older. The well known Ridley font was also changed to better suit the retro design.” 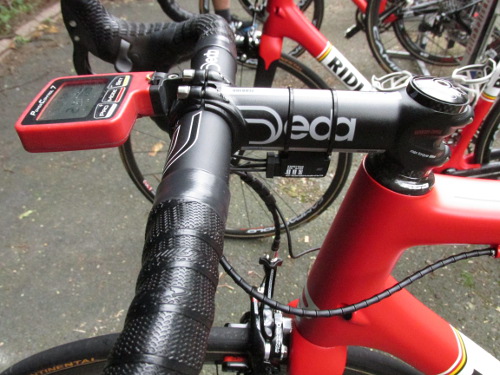 As seen everywhere on pit row, the stems are long and slammed. The frame still has the internal cable ports for running a mechanical drivetrain 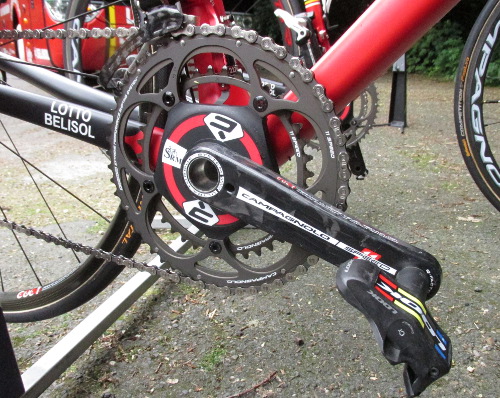 Belgian bikes running an Italian drivetrain with a German power meter and French pedals – it hardly gets more international than that. All the team bikes were running Campagnolo’s Super Record EPS drivetrain with an internal battery – the charge port can be seen just to the right of the American made K-Edge chain guide. 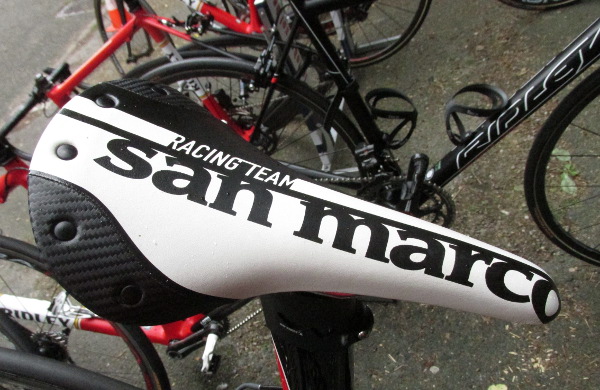 There were a variety of Selle San Marco saddles found throughout the bike rack. 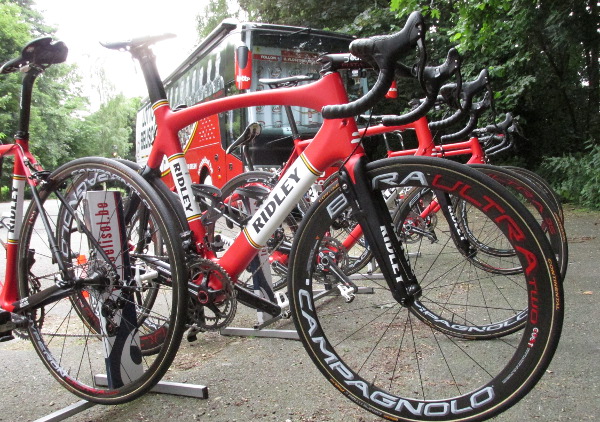 The Noah Fast is Ridley’s version of an aero road bike and features the unique F Split fork and integrated F-Brakes. 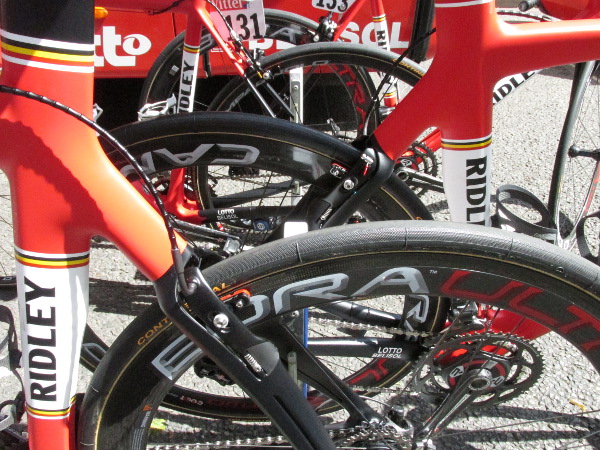 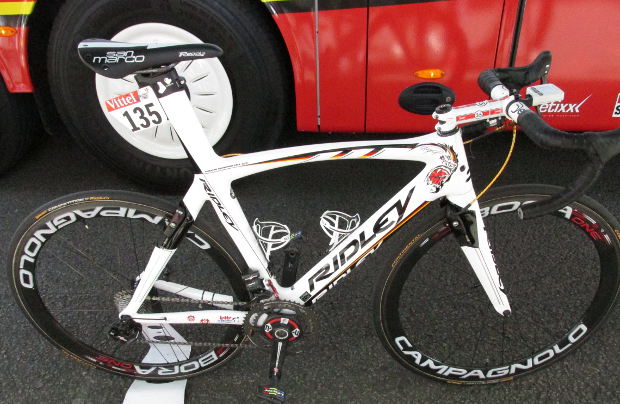 Greipel is the only rider to get special paint and his Noah also features the “Gorilla” caricature. For maximum stiffness, he runs Deda’s over-sized 35mm diameter handlebars.

Along with fellow German Andre Kittel, Andre Greipel is one of the most feared men in the finish sprint. 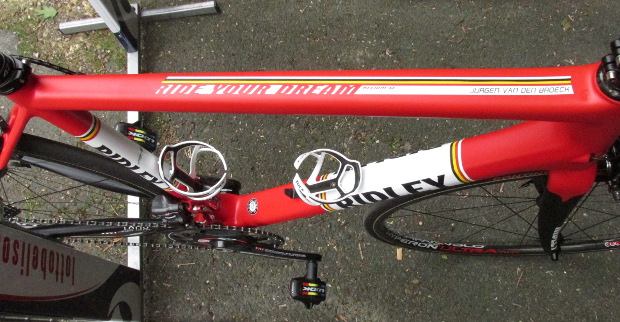 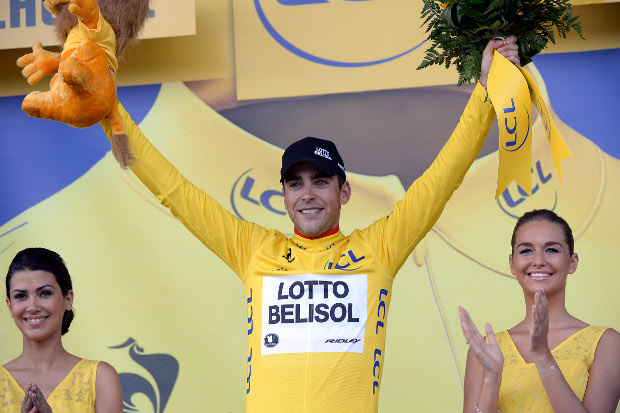 Tony Gallopin took it to heart on stage 9 when he rode hard, watched the clock and ended up with took the biggest day of his career. Photo: Bettini.