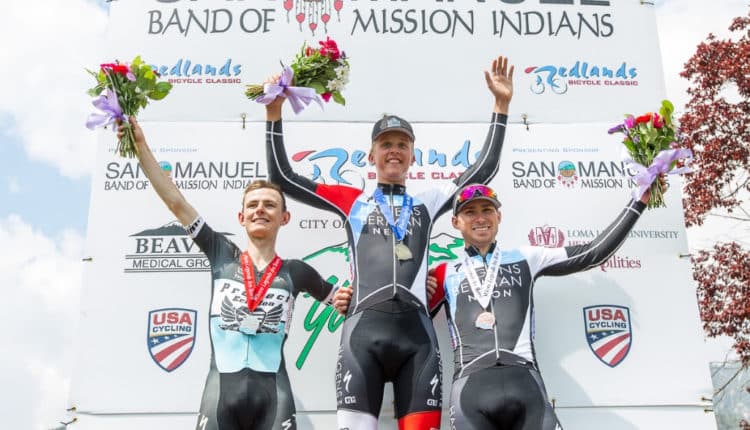 May 3, 2018 (Yukaipa, CA) – Thomas Revard proved he’s not only a beast in criteriums, he’s also a handy climber today after taking victory today on stage 2 of the Redlands Bicycle Classic. The 20-year-old U23 criterium champion never really launched a full-on attack on the climb to Oak Glen, he just rode away from his competitors with five kilometers to the line at Oak Glen.

“Going into the day, we were hoping to set up Sean (Bennet) and Will (Barta) because they’re our two big GC contender guys,” Revard said. “Going up the last climb, everything just happened and I managed to hold it off until the end. Today managed to play out in a good way, it was unexpected but we’ll take it.”

The Axeon Hagens Berman team was a force from the word “go” during the 94-mile road race. The tempo was frantic until three laps to go, when a break finally formed out of the peloton’s frenetic pace including Chris Blevins (Axeon), Fernando Islas (Aevolo), Jonny Clarke (UHC) and Cullen Easter (303 Project). 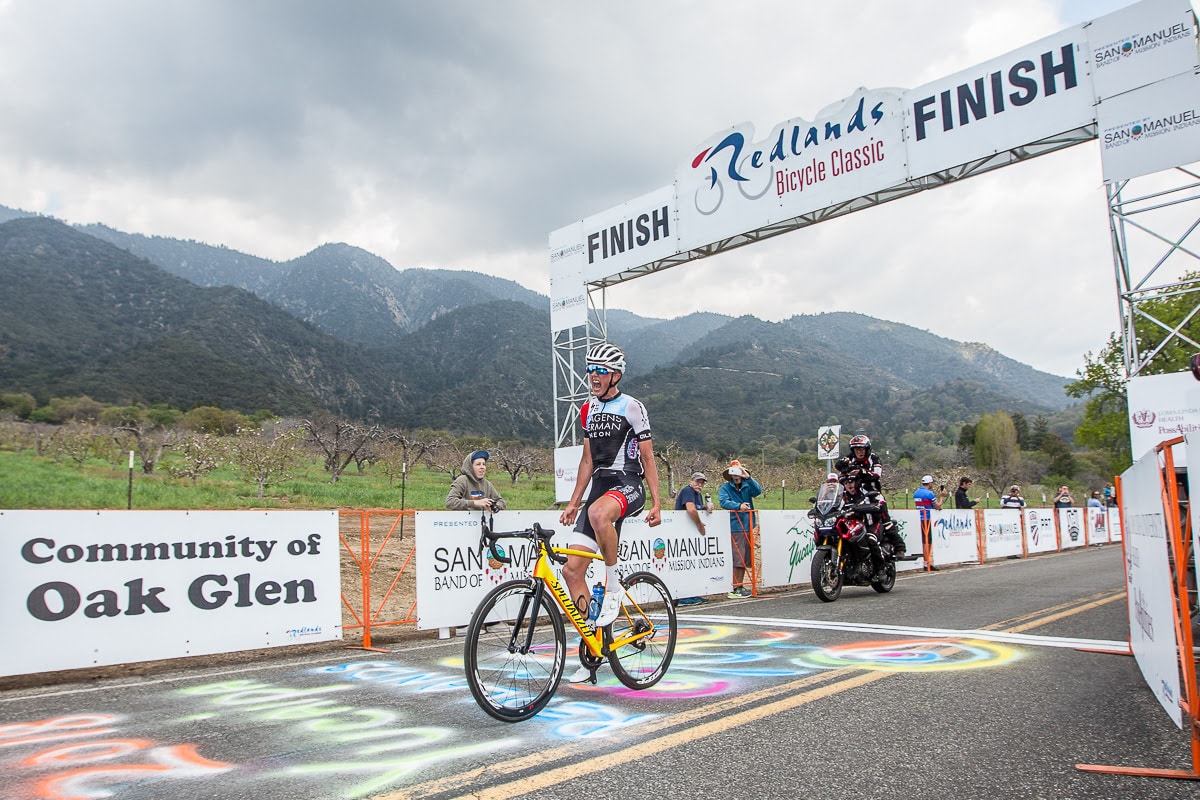 “I was able to make it into the break, that was our plan,” Easter said. “Once I was in the break, I knew the KOM was something I really wanted to go for. Being my first time at Redlands, I threw a lot of energy behind it and was able to get all 3 KOM’s. It was a really fun day with good people in the break. I am going to try as hard as I can to defend it.”

The group gradually gained almost two minutes on the peloton, but Elevate and Holowesko weren’t about to let the four leaders get too much of an advantage. By the time the break made the turn to Oak Glen the peloton was breathing down its neck. From then on, it was a battle of survival. Axeon Hagens Berman charged to the front and splintered what was left of the already decimated pack. With five kilometers to go on the final massive climb, Revard drove to the front, turned on the gas and no one could match his pace. 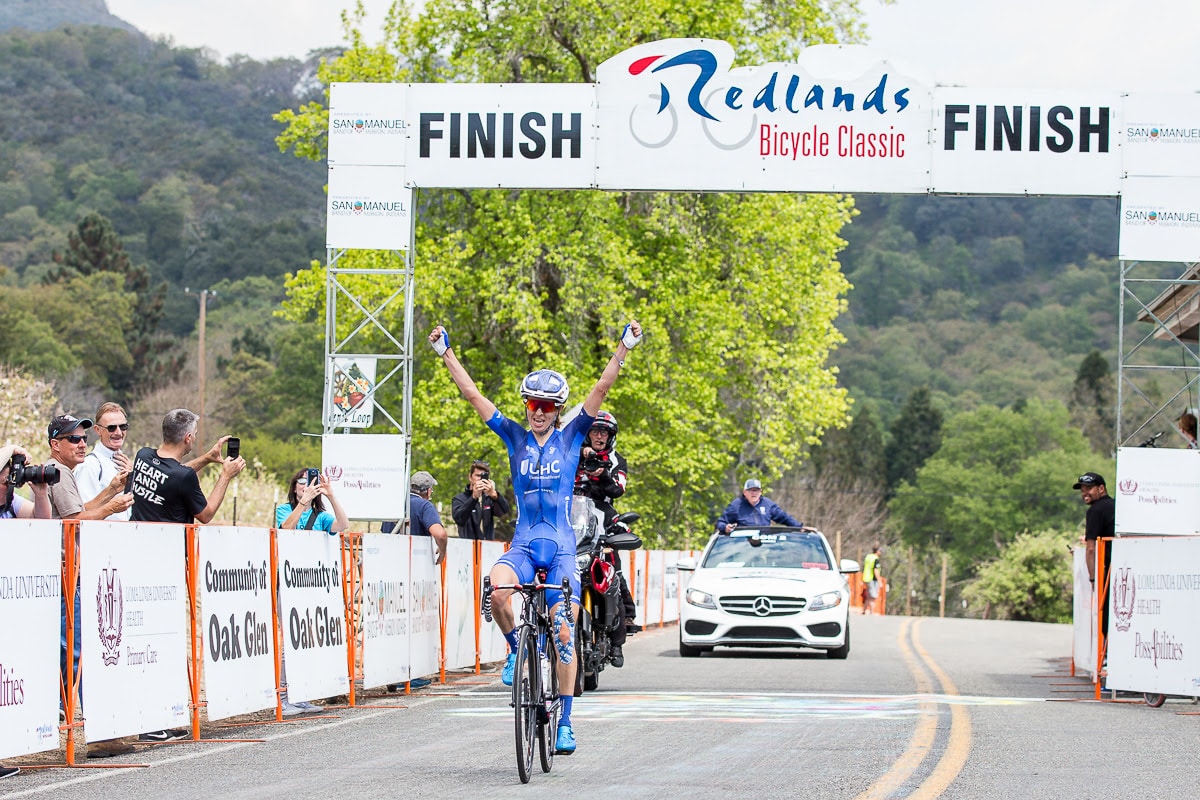 Katie Hall (UnitedHealthcare) attacked out of the field on the final climb up Oak Glen to nab the stage win for the second year in a row. Hall flew past the break in the final kilometers for the victory ahead of Edwige Pitel (Jakroo Racing) in second and Sara Bergen (Rally Cycling) in third. The UHC star continues to dominate the USA Cycling Pro Road Tour, after winning both Joe Martin and Tour of the Gila stage races this spring, now leading the general classification in Redlands after stage 2.

“We had a couple of cards to play today,” Hall said. “It just turned out that my card was the one that worked today in the end. I’m really happy to take the jersey. I think it will be some really aggressive racing this week. There are a bunch of teams with 8 riders, and we have 6 so we’re expecting some heat. It should be a lot of fun.”

A break was established on the second lap of the 4-lap circuit before heading up to Oak Glen for the finish of the 66.2-mile road race. Rally Cycling had both Bergen and Katherine Maine in the break, with the plan to snatch the time bonus in the intermediate sprints. UnitedHealthcare rode with both Leah Thomas and Lauretta Hanson in the break, doing the same. Hanson was able to snatch the first sprint, and cross for third in the second sprint that landed her in the green jersey at the end of the day.

“We’re definitely riding for GC so we wanted to scoop up the points for time whenever possible,” Sara Bergen said at the finish. “I want to congrats Katie on a great ride. We put it all out there today. We might be down a couple of seconds but we have 3 days of racing left.” 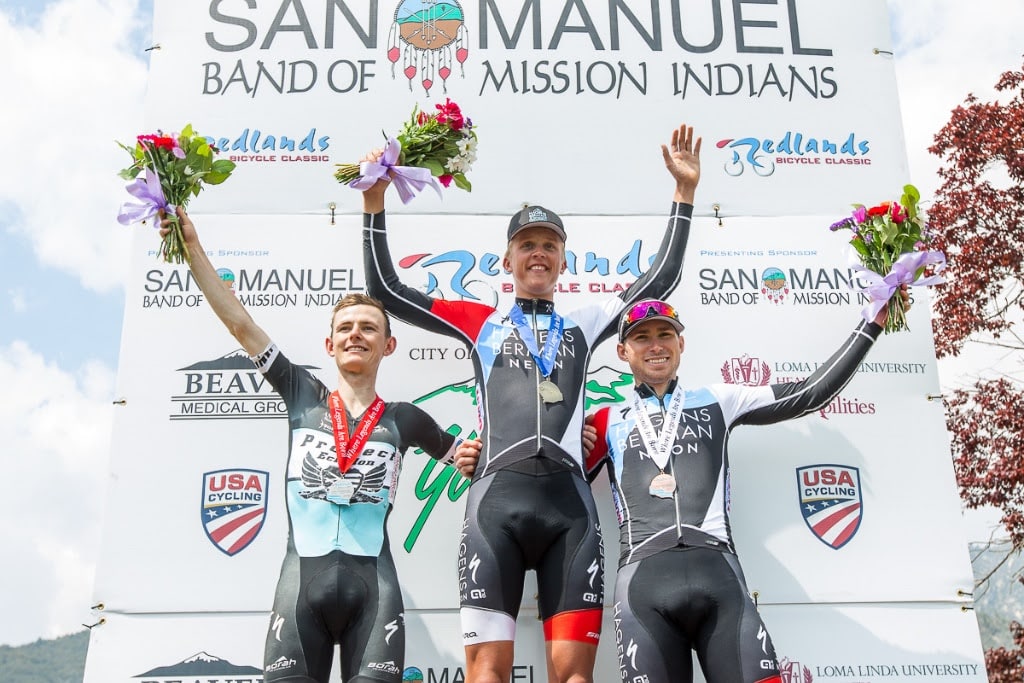 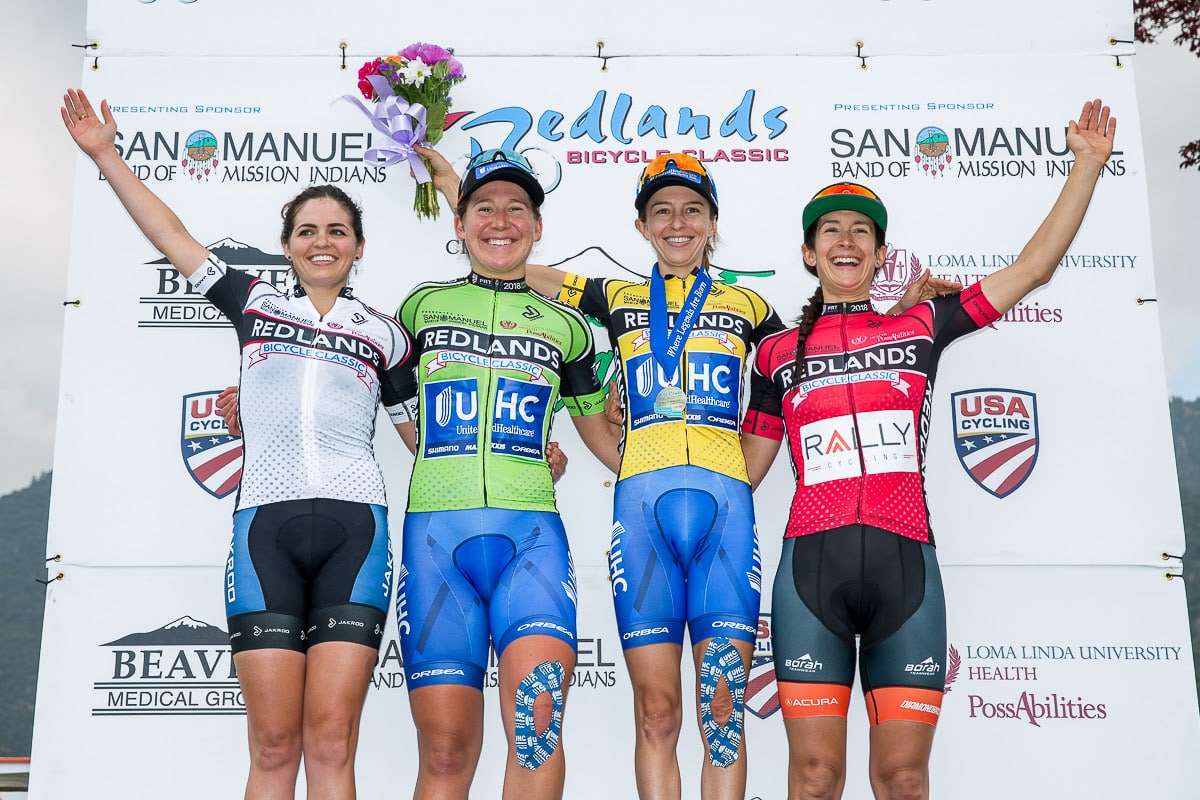 Stage 3 City of Highland Circuit Race begins tomorrow at 9 AM with para-cycle start, followed by Pro Men at 10 AM, and Pro Women at 11:10 AM.