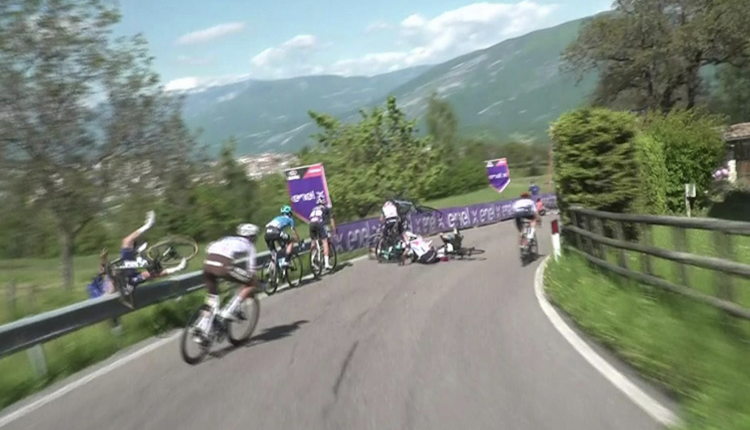 Belgian rider Remco Evenepoel, in the midst of  his comeback nine months after a horror crash, pulled out of the Giro d’Italia after falling over a barrier in Wednesday’s 17th stage. The Deceuninck-Quick-Step rider went over the security barrier in a mass pile-up on the descent down the San Valentino Pass. After several minutes the 21-year-old managed to get back on his bike and head towards the finish line 16 miles away away at Sega di Ala, finishing half an hour behind Ireland’s stage winner Dan Martin.

“Examinations revealed there were no fractures, but he has suffered multiple cuts and bruises,” his team said.

“The medical team decided that it would be best if Remco was to leave the race.”

The 21-year-old had dropped to 27th place overall, more than an hour behind race leader Egan Bernal of Colombia.

“It’s a crash that shouldn’t have happened,” said Evenepoel.

“I don’t know what really happened in front of me, but I came into the corner and saw some guys on the ground and I couldn’t pass on the right side because I was next to another guy, so I didn’t have any chances to avoid a crash.

“Of course it’s sad to leave the race, and my first Grand Tour too early, but in the end, it was a nice experience and I hope to be back one day again.”

Evenepoel was on the comeback trail after fracturing his pelvis after hitting a bridge wall and plunging into a ravine during the Tour of Lombardy in Italy last August.

That horror crash ended a run of success in all four stage races he had taken part in last season, including the Tour of Poland.