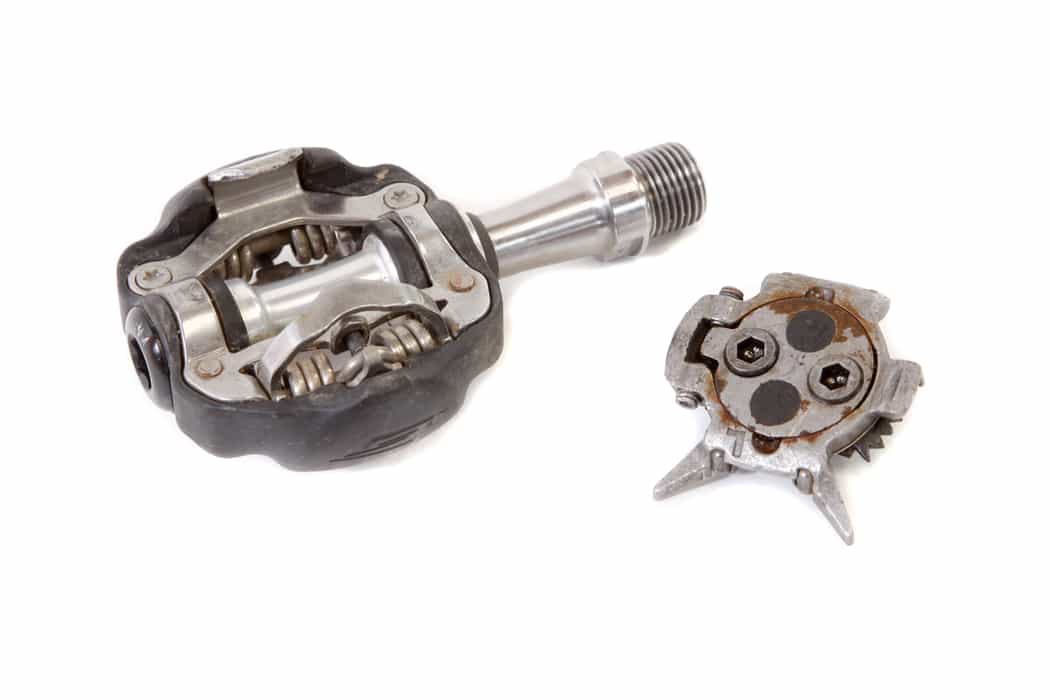 After years in development, Speedplay’s latest pedal has now hit the streets, or, more accurately, the dirt. The Syzr is technically a mountain bike pedal, but its potential for gravel and cyclocross use is what has us most excited.

Speedplay had one goal in mind with the Syzr: to combine the efficiency of a road pedal with the all-conditions requirement of a mountain/gravel bike pedal. Sounds simple enough, but considering the fact that no one has done that yet should be indicative of the challenges. At first glance, the pedal body itself doesn’t look all that much different from an SPD, but one look at the two-hole cleat and you realize the real difference is in the cleat itself. The cleat uses two plates that pivot on each other to deliver up to 10 degrees of adjustable float. Much like the Zero road pedal, the cleat uses hex set screws to individually adjust heel-in and heel-out limits.

What’s really noteworthy, and unique to the Syzr, is the fact that when the cleat is engaged, the pedal body rests on the outer portion of the cleat itself, not the rubber lugs of the shoe. The tight tolerances of the design are different than how a Shimano SPD pedal works. And if you were to strip away the rubber tread from the shoe and engage an SPD, you’d feel a notable amount of slop between the pedal and cleat. The rubber tread makes it so you don’t realize this; nevertheless, you end up losing some efficiency every pedal stroke as power is robbed by the compressing tread, even if it is minimal.

The challenge in all this, as Speedplay founder Richard Bryne pointed out, is that in creating such tight tolerances, something other than metal on metal had to be used; otherwise, clipping out in wet or muddy conditions would be a struggle. Ceramic rollers ended up being the Syzr’s solution, with two rollers in the front and two in the rear of the cleat to provide a friction-reducing solution.

THE RIDE
Bryne recommended tring the Syzr’s at the lightest spring tension (that’s how they come adjusted stock), since a high tension could affect disengagement in poor conditions. So, we took his recommendation and headed out for our first ride. They had a feeling much like the Zero road pedal, with a free float across all 10 degrees. There was a little more movement than we needed, and our heels were rubbing the crankarms, so we adjusted the heel-in set screw and then were dialed. Entry and exit were outstandingly smooth, and it took all of a few pedal strokes to realize the difference in power transfer between an SPD and the Syzr. Going back and forth between pedal systems a couple of times reinforced that what we were feeling wasn’t a placebo effect; there was indeed a more efficient pedaling feel with the Syzrs.

Then we hit the dirt and realized that the lightest spring-tension setting wasn’t going to work for us after unclipping unexpectedly a handful of times. Some of it was simply getting used to the free-float feel that doesn’t give much of a warning before we were at the point of disengaging, but it turned out that riding over anything more technical than a dirt road, the tension just wasn’t high enough. After a couple rotations of the spring-tension screw, the unclipping issue was solved, and we could use all the body English necessary to navigate our way over and around ruts and rocks.

On one ride in particular, though, we encountered wet, sandy sections that required some on-and-off-the-bike situations. After the initial dismount, we had issues getting unclipped from the Syzrs the following time. The added ingredients of water and sand made unclipping inconsistent, with one time being no problem, then the following time being an extreme challenge. After decreasing the spring tension, we didn’t experience the issue anymore, yet we were back in the same boat as our first ride and unclipping by accident.

THE VERDICT
The Syzr did most everything that was promised of it in providing greater pedaling efficiency, greater float adjustability, and ease of clipping in and out (most of the time). The ease of clipping out was excellent, until wet sand compromised the consistency. Unfortunately, this is a big limiter as a cyclocross pedal, due to the often-challenging course conditions and numerous times getting on and off the bike during an event. As far as a gravel-grinder pedal where having the efficiency of a road pedal is important yet the ability to deal with a random hike-a-bike is a must, the Syzr is easily a top pick for such riding. Three spindle options are available, a Chrome-Moly for $165, the Stainless we tested for $199 and a Ti option for $389. All of the pedals are assembled in San Diego using mostly U.S.-made parts.