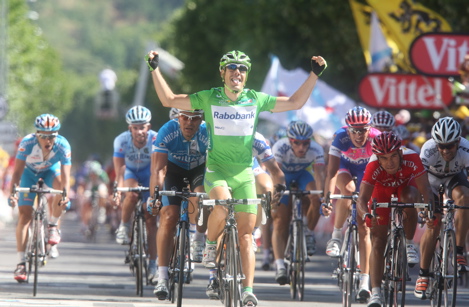 Spain’s Oscar Freire has perhaps more reason than most to hope for a top finish on the final stage of the Tour de France tommorrow, but the Rabobank rider will not be the only sprinter eyeing a prestigious win on the finish line of the Champs Elysees. The final stage of this year’s race begins in Etampes to the south-west of Paris, and makes its way over the undulating roads of the Chevreuse valley before heading into the capital. Then, the Tour peloton will complete eight laps in the center of Paris.

Australia’s Robbie McEwen is winless so far on the Tour this year, although the Silence-Lotto rider is not brimming with confidence. “It would be great to do something on the Champs Elysees, but we’ll have to see how the legs are, it’s been a tough Tour,” McEwen said after completing the race’s penultimate stage, a 53km time trial, on Saturday. McEwen, Columbia’s German sprinter Gerald Ciolek and Belgian Gert Steegmans of the Quick Step team should all be in the mix along with the likes of Norway’s Thor Hushovd and German veteran Erik Zabel.

However the man with perhaps most to win on the Champs is Freire, who hopes to make history by becoming the first Spaniard, and the first Rabobank to win the Maillot Vert of the points competition. Freire, a three-time world champion, tightened his grip on the sprinters’ coveted prize on Friday, when he nevertheless conceded some ground to Milram’a sprinter Ete Zabel, a former six-time winner of the Maillot Vert of the points competition. Oscarito has a lead of 42 points on Zabel (202), with Hushovd third (198). Freire’s sprint win on the 14th stage helped build his lead, but his he consistency throughout has been key to his success so far.

“People don’t understand how difficult it is to win the green jersey, you have to work for it every day”, explained Freire. “If you don’t win (a stage), you have to go for the points at the intermediate sprints, and you lose a lot of power that way,” said Freire. “So It’s a really tough competition.” On Sunday, Freire will be hoping a breakaway eats up the two intermediate sprints on the race before he has to up the tempo to hold off Zabel and Hushovd at the Champs Elysees  “Mathematically, I’ve just about got the jersey,” said Freire after Friday’s stage. “Now I just have to keep a close eye on Zabel and Hushovd.” 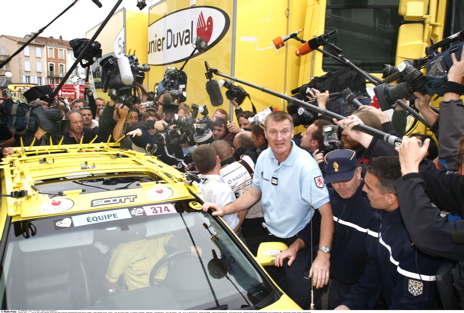 Tour’s Anti-Doping Head Laments Lack of UCI Support
It was inevitable given the ongoing spat between the UCI and Tour De France, and finally, AFLD chief Pierre Bordry has slammed the International Cycling Union (UCI) over a lack of co-operation prior to this year’s race. Due to the ongoing conflict between world cycling’s governing body and major race organisers, this year’s race was held under the auspices of the French cycling federation and not the UCI. All anti-doping controls were handled by the French National Anti-Doping Agency (AFLD), which so far has snared three riders for illegal use of the blood booster EPO (erythropoietin).

Italian climber Riccardo Ricco’ and two Spaniards, Manuel Beltran and Moises Duenas, were expelled from the race after testing positive for EPO. After the final stage on Sunday the AFLD will have taken 250 samples from riders during the race, excluding the 180 blood samples taken from the entire field in a two-day period just before the first stage, and the AFLD also carried out 80 random tests on riders in late June, leading up to the Tour.

AFLD chief Pierre Bordry has popped off to claim it has been a successful operation on the Tour, saying  “It’s more than what the UCI usually do.” Bordry said he regretted the “lack of cooperation” from the part of the UCI, notably a lack of information relating to the UCI’s ‘biological passport’ scheme which could have given the AFLD a head start against potential cheats. “I would have preferred that the UCI collaborated a bit more with us in the fight against doping,” added Bordry. “We played the game with the UCI, but they have refused to give us any information whatsoever.” Bordry said that in the absence of help from the UCI, he sought collaboration with a laboratory in Lausanne. The Lausanne lab has official backing of the International Olympic Committee (IOC), and dealt with the peloton’s 180 blood samples, at least two of which, from Ricco and Beltran, prompted the AFLD to carry out conclusive tests on urine samples. “Our collaboration with the Lausanne laboratory at the start of the Tour was very productive,” added Bordry. “For us to target some riders we used a mix of their results, our own information and what we seen on the race itself.”

Contre Le Montre: Tour de France Decided Before By Ticks Of The Watch
Fifty years ago, Luxemburger climber Charly Gaul won the Tour De France from Italian rider Vito Favero, clinching his win in a 74km ITT from Besanon to Dijon. In 1962,     Jacques Anquetil defended his Tour title with a win in Stage 20’s 68km ITT from Bourgoin to Lyon, taking the Maillot Jaune away from Belgian Jos Planckaert for good. Six years later in 1968, flying Dutchman Jan Janssens grabbed the Maillot Jaune from hapless Belgian Herman Van Springel on the last stage of the Tour, a 55.7km ITT from Melun to Paris. Janssens won the Tour by 38″.

A decade later, it was Bernard Hinault winning his first Tour De France in the final TT as he crushed Maillot Jaune Joop Zoetmelk for his 2nd ITT win of the 1978 Tour, a Stage 20 72km test from Metz to Nancy. 1987 saw Carrera man Stephen Roche take the Maillot Jaune from Pedro Delgado on Stage 24’s 38 km ITT in Dijon to win the 74th edition of Le Tour by 40″. In 1989, Laurent Fignon was leading Greg LeMond by 50″ on the final stage, a Stage 21 ITT of 24.5 km from Versailles to Paris, but in the closest finish ever in the Tour De France, LeMond won the last stage and beat Fignon by 58″ in an incredible finish to capture his 2nd Tour De France. 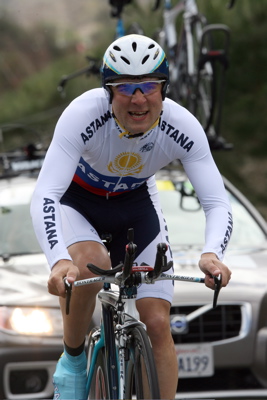 The three-time Russian time-trial champion showed “abnormal values” during an internal doping check, according to the release. Though the results ‘do not indicate the use of banned substances,’ the release continued, “the team has therefore applied the contractual terms based on these physiological and biological abnormalities,” dismissing Gusev “with immediate effect.’ 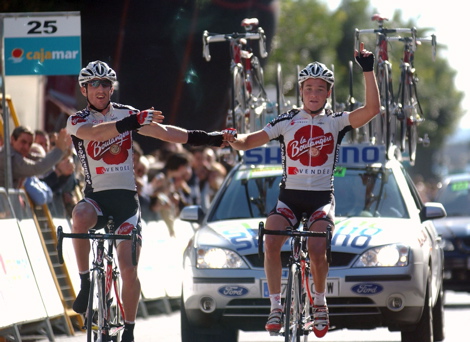 Team Transfer News: Pineau & Alby Davis To Quick.Step, Auge’ Stays With Cofidis, Moncoutie’ Out
Right on the heels of Stage 19 winner Sylvain Chavanel, Jerome Pineau (Bouygues Telecom) has announced he will join Quick.Step with a two year contract, for 2009-10. “I was a little nervous to tell my team but they were cool about it and understood it was a sporting choice. I know I’m leaving a lot of friends behind, but it’s not like my career is over.” Quick.Step is looking for Pineau to improve in one day races and Pineau understands that it will be a big challenge for him. “It’s an interesting challenge for me. I think I can still improve as a rider and I realize that there is still time for me to learn new things. At Quick.Step the situation is perfect for me to improve and I’m super happy because I think there’s a real chance for me there.” Also joining Quick.Step in 2009 will be Aussie sprinter Alan Davis after a year spent on the on the Mitsubishi-Jartazi squad, where he’ll replace Gert Steegans as Tommeke Boonen’s key leadout rider.

Meanwhile, 33 year old Stephane Auge’ will re-sign for 2009 with Cofidis, while David Moncoutie’ will not stay with the French team. Cofidis manager Eric Boyer was very disppointed about Moncoutie’s performance at the Tour this year. “(Moncoutie’) has been totally non-existant at this Tour. It’s simple; he won’t be with our team next year.” Cofidis will also not renew the contract of Swiss rider Steve Zampieri. Bouygues Telecom has re-upped with Laurent Lefevre and Pierrick Fedrigo, while they are still negotiating with Thomas “T-Blanc” Voeckler.