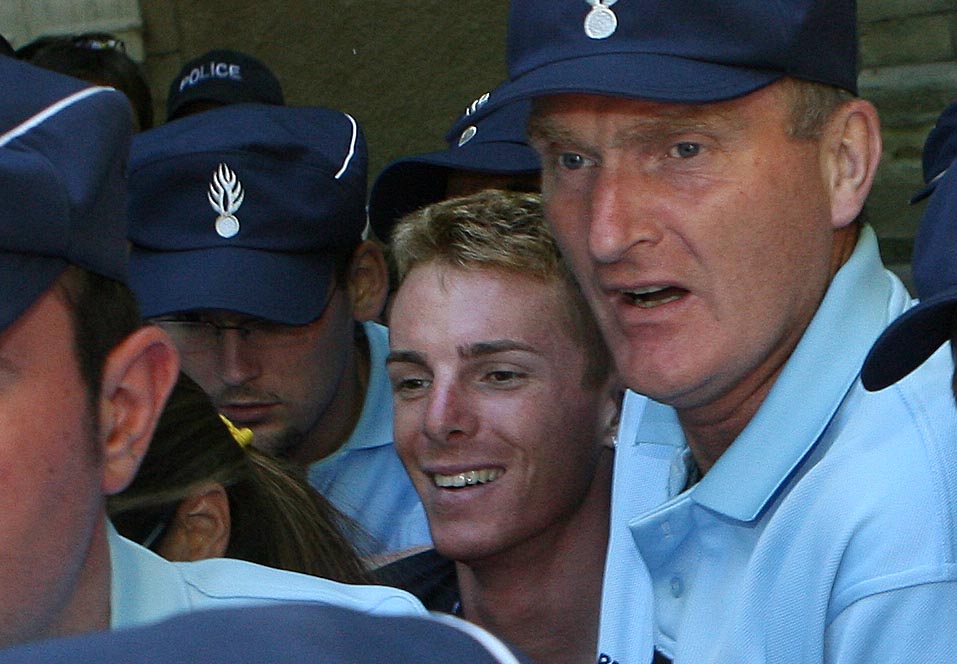 WADA Chief says “Ricco caught by secret doping molecule” World Anti-Doping Agency chief John Fahey said Wednesday in Sydney that Italian rider Riccardo Ricco tested positive at the Tour de France after a secret molecule was planted in the blood booster Micera, a third generation EPO (erythropoietin). Fahey said WADA worked with Roche Pharmaceuticals to included a special molecule in CERA, (Continuous Erythropoiesis Receptor Activator) to acted as a flag in drug tests showing when an athlete was using the substance. “In the development of that particular substance, close cooperation occurred between WADA and the pharmaceutical company Roche Pharmaceuticals so that there was a molecule placed in the substance well in advance that was always going to be able to be detected once a test was taken,” Fahey told Australia public radio.Although Tour Of California sponsor Amgen has always refused to add markers to their Epogen EPO due to US pharmaceutical regulation issues, Roche was open to the cooperation. “There’s more and more of this (cooperation) occurring,” Fahey said. “The more cooperation the scientists can have with the drug companies in the detection of performance-enhancing drugs the greater the likelihood is they will be detected when tests are undertaken.” Ricco is one of three riders to test positive for EPO at this year’s tour, but has denied using the substance, which was developed to boost oxygen levels in the blood of people with anemia who also have kidney disease. Meanwhile back in Italy, Ricco’ has lawyered up, hiring 73 year old attorney Odoardo Ascari of Modena, a well-known defense lawyer in Italy who led the defense team of former Prime Minister Giulio Andreotti in his controversial mafia association trial in 1999. 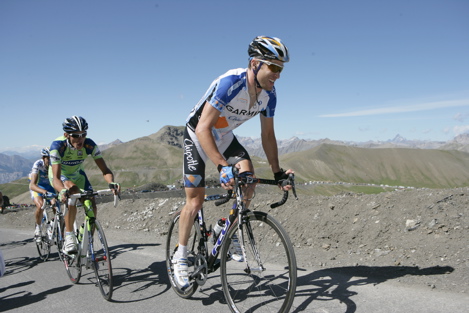 White Sez: Christian Is Down, Not OutMatt While, Garmin-Chipotle sports director explained what happened to team leader Christian Vandevelde in yesterday’s stage, saying “Christian lost some time on the final climb of the Bonette, about 45″ at the summit, and then crashed on the descent. It was a little crash, not serious and Christian is still in a good mood. We had Ryder Hesjedal in the break and he waited for Christian on the final climb. Today we’ll try to put another climber in the break, like Ryder Hesjedal or Trent Lowe. They are out team climbers. As long as we can limit the time loss of Christian today, we’ll be satisfied. We are still in the hunt for a podium place but everything depends on today’s stage and in the time trial Saturday. Anything can still happen at this point in the Tour.” 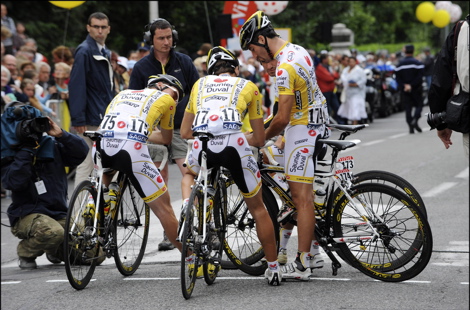 Despite Saunier-Duval Riders Pleas, Company Pulls Out Of Cycling Not wanting to be painted with the broad brush of doping, the 24 remaining riders of team Saunier-Duval who have not been involved in the Ricco’ / Piepoli affair have issued a communique that they are not all dopers. Ra£l Alarc¢n, Raivis Belohvosciks, Alberto Ben’tez, Rubens Bertogliati, Iker Cama¤o, David Ca¤ada, Eros Capecchi, Ermanno Capelli, Juan Jos Cobo, David de la Fuente, Jes£s del Nero, Arkaitz Dur n, Alberto Fern ndez de la Puebla, Denis Flahaut, ?ngel G¢mez, Jos ?ngel G¢mez Marchante, Hctor Gonz lez, Be¤at Intxausti, Josep Jufre, Rubn Lobato, Javier Meg’as, Manuele Mori. Luciano Pagliarini, Aurelien Passeron have explained “in our team, the most important thing is the ‘human dimension’ and an ethical approach to our sport rather than just sporting results. We don’t accept, and condemn the choices of some riders who have tried to cheat to be able to win. We don’t want to be put in the position where we will lose our reputation, up to now a very good reputation of the riders and management of Saunier Duval Scott. We don’t want to pay for the errors of others and we continue to have faith in a team that up until now has believed in us and provided day after day a serious and honest image. Our principals are always based on hard training and a clean team preparation, thanks to our team that has always given us the most serious support, but with reasonable behavior, not a sporting result at any cost. We can not and do not want to ignore the team news; whoever has made a mistake must pay! But we ask that the riders who have always worked hard and struggled honestly for the honor of the team are not sacrificed! We think that we, the riders of Saunier Duval Scott can still bring a lot to cycling and hope to have your support to be able to continue to do our sport and show that our team is a team made of serious and honest men.” Despite the riders appeal to reason, the management of Saunier-Duval announced Wednesday that they would stop their sponsorship of cycling, effective immediately. The President of Saunier-Duval Thierry Leroy explained that he was “disapointed and angry after the revelation of Ricco’s positive. Maiden Tour Stage win Huge Remedy for DesselFrenchman Cyril Dessel of AG2R finally shed his nightmare season with a prestigious first career stage win at the Tour de France 16th stage on Tuesday. Dessel was first noticed in cycling when he wore the Maillot Jaune a day in 2006 – when he finally had to hand it over to disgraced American Floyd Landis.A year later Dessel disappeared almost entirely from the peloton after succumbing to toxoplasmosis. Months of hard work followed during the winter, and he re-emerged with important stage wins at the Four Days of Dunkirk, the Tour of Catalonia and the Dauphine Libere earlier this year. After a quiet Tour de France thus far, Dessel seized his chance with both hands after escaping from a small breakaway group at the end of a long descent, outsprinting compatriot Sandy Casar prior to the finish line. “I’ve come a long way since 2007, which was a really difficult year for me,” said Dessel after claiming his team’s first stage win of this year’s race. “I was really at rock bottom because of my health problems, but thankfully I was given a lot of support from friends and family. I worked hard to get back into shape and today all that effort has paid off.”Dessel’s bid to shine on the race’s earlier stages was kept in check by yet another health problem, although one that was a little more delicate. “I was in real pain at the start of the Tour because of haemmorhoids. But today I knew I couldn’t let the opportunity go begging because it’s not every year there’s a stage that suits you. I came close in 2006, and I got the yellow jersey as consolation. After my wins earlier this year I knew I wanted to add a stage win from the Tour. It’s great, a bit of a relief really – and it’s good for French cycling.”Dessel had been part of an earlier breakaway group that caught Germany’s Stefan Schumacher shortly before the summit of the Cime de la Bonette-Restefond. After a long descent with three other riders, the 33-year-old Frenchman made his decisive move inside the last kilometre to finish ahead of Casar, with Spaniard David Arroyo finishing third ahead of Ukrainian Yaroslav Popovych. “I knew from looking at the race book there was a bend in the final 150 metres so I knew I had to attack with 400 metres to go because after the bend it would have been impossible to overtake,” he added. “It was a really tense finish and I told myself I had to stay as calm as possible, but in the end it worked out perfectly.” 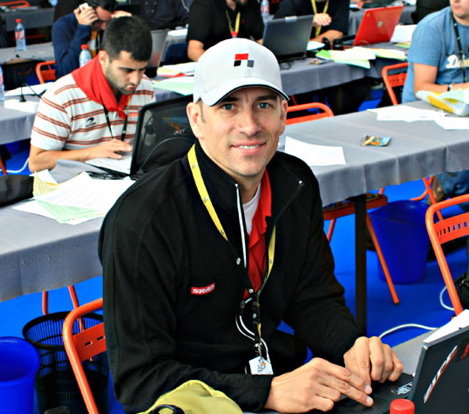 SRAM’s Michael Zellman On The Road At Le Tour

Levi Leipheimer Live On SRAM’s The Road Diaries TommorrowLevi Leipheimer will be on The Road Diaries tommorrow, Thursday, July 24, at 12:30pm ET to answer your questions in a LIVE video broadcast! You can ask the two-time Tour of California winner and US National Champion questions about his training, his season, his career, his team, or his equipment! Or anything else you’re curious about*. Record your question on video and post it on the ‘Ask Levi’ channel by clicking the Produce tab below or emailing your file to [email protected] If you have a written question, email [email protected] or leave a comment on this page.SRAM’s innovative, evocative The Road Diaries website takes you behind the scenes at the Tour de France. The Road Diaries takes you along with SRAM to meet the world’s greatest cyclists at the world’s biggest races. Using the latest multimedia technologies, you’ll see exclusive all-access content in real time and interact with the people who make pro cycling tick. SRAM is there for you with The Road Diaries, so if you can’t go yourself, Make The Leap with SRAM and The Road Diaries!Check Out The Road Diaries Here 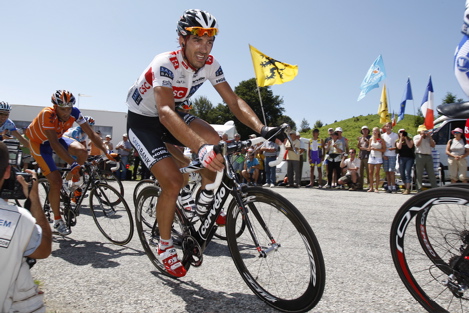 Team Transfer NewsRumors are floating around the Tour De France that Fabian “Spartacus” Cancellera of Team CSC-Saxo Bank has gotten a huge offer of 2 million euros ($ 3.2 million) a year for three years from Russian squad Katuscha, ex Tinkoff but he feels at home on the Danish squad and turned the offer down. Italian sprinter Alessandro Petacchi will move to LPR Brakes i 2009 and 36 year Davide Rebellin has been talking with his former team manager Fabio Bordonali, who runs the Italian outfit but is still considering his options for what will likely be the final year of his career. 23 year old Belgian sprinter Wouter Weylandt has extended his contract with Quick.Step for the next two seasons. Patrick Lefevere said “Wouter is one of the most interesting young riders on the international cycling scene. He started his professional career in 2004 as a stagiaire in our team. His contract renewal is a sign of our continued trust, which we are sure Wouter will know to reciprocate with performances at the height of his potential’.” With the emergence of Mark Cavendish at Columbia, young German sprinter Gerard Ciolek is rumored to be moving to Milram in 2009, where he’ll be riding a Focus bike as Colnago will no longer sponsor the German milkmen. Meanwhile, Damiano Cunego of Lampre will lose his key team rider Sylvester Szymd to Liquigas in 2009, where the Polish climber will be an important support rider for another new arrival at Liquigas, 2006 Giro d’Italia winner Ivan Basso.
Road Bike Action & AFP