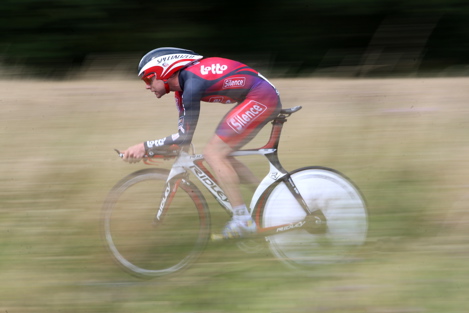 Cadel Evans: First Aussie Tour Winner? Fellow Aussie Sunderland of CSC Slams Cadel’s Team Cadel Evans has been tipped to overhaul his 1’34” deficit to Spanish rival Carlos Sastre ahead of their duel for the Tour de France yellow jersey in the final time trial on Saturday. Sastre, who rides for the CSC team run by former Tour winner Bjarne Riis, stole the limelight on the final day in the Alps Wednesday by taking the lead thanks to a victorious attack at the bottom of the 13.8 km climb to the Alpe d’Huez.The Spaniard finished 2’15” ahead of Evans and now leads teammate Frank Schleck by 1’24” in the overall standings, with Gerolsteiner’s Bernhard Kohl of Austria in third at 1:33. However, the battle for the yellow jersey will now go down to a duel between Sastre and Evans, who remained in fourth at 1:34 following the 18th stage here Thursday won by Germany’s Marcus Burghardt. Despite the gap, Evans, an excellent time tester who holds a Commonwealth Games TT, would normally be expected to finish the 53km time trial between two and three minutes faster than his Spanish rival.In the Tour’s Stage 4 time trial over 29.5km, Evans was fourth, 27″ behind winner Stefan Schumacher, while Sastre finished 1’43” behind the German, so the Aussie was 2.5″ faster per kilometer than Sastre. Some are wondering whether having the Maillot Jaune and starting last from the field will drive Sastre, more known for his climbing skills, to Tour victory. CSC director sportif, Australian Scott Sunderland, admits the rolling course on Saturday, which has no real climbs, is more likely to suit Evans. “It’s not perfect for Carlos, but he’s in good shape, he has the yellow jersey and a lot of motivation and he just seems to be getting better and better, as he always does on the third week,” Sunderland told AFP. “It also depends a lot on how Cadel and the other guys have digested the last three days (of climbing in the Alps). Come Saturday, they will all have more than 3000 km in their legs. “I also think Carlos will be fresher, he hasn’t been under pressure. It could be (a major factor).” Sunderland believes that Evans can now thank a few teams whose respective ambitions on the way up the 13.8km climb to Alpe d’Huez allowed him to limit his losses.“In the end Evans only had to pull the last five kilometres out of the 13.8. I think he got off pretty lightly. If it was just Carlos against Cadel, Carlos would easily have taken another 30 seconds,” added Sunderland, who admits CSC could probably have benefited from “another mountain top finish”. “It’s not just (about) having the yellow jersey in Paris.  It’s how you do it, how you approach it, defend it and what you do in the race,” he added. “To be honest they (Silence) didn’t deserve the yellow jersey. It wasn’t that Cadel didn’t deserve it, but the team didn’t deserve it because they couldn’t defend it. The way the (CSC) boys rode, the way they’ve taken it and defended the jersey was phenomenal.American Christian Vande Velde, who dropped out of yellow jersey contention on the second of three days in the Alps, is hoping for the race of his life in a bid to secure a podium place. The 32-year-old Garmin team leader is sixth place at 4:41 behind Sastre and is hoping to jump up to third at the expense of Russian Denis Menchov, Austrian Bernhard Kohl and Luxembourg champion Frank Schleck. “I think Cadel has a great chance of winning the Tour,” said Vande Velde, who finished 10secs behind Evans in the first time trial. “I’m just going to go as fast as I can. Whether it’s fast enough to win it or fast enough to move up a place, as long as I do a good ride. I’ve never completely excelled at that distance but I feel really good so there’s no reason I shouldn’t feel good on Saturday.” 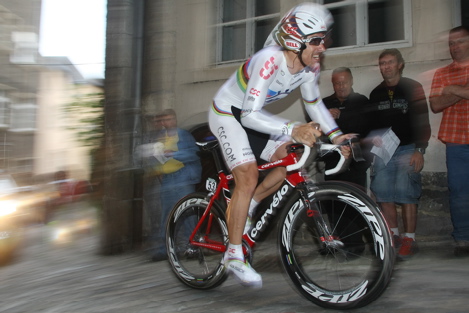 Cancellara Re-Signs with CSC-Saxo Bank Until 2011Despite big offers from other teams, double world time trial champion Fabian Cancellara of Switzerland re-signed with CSC-Saxo Bank cycling team for another three years, until 2011. Cancellara, who will begin as the favourite for the penultimate stage time trial of the Tour de France Saturday, has won some of cycling’s biggest one-day races with the Danish team run by former Tour winner Bjarne Riis. “It means a lot to me that my future is secure with Team CSC Saxo Bank,” declared Cancellara. “This is where I belong and where I can reach my potential in the best possible way. When I reflect on the way I’ve evolved since joining the team and the things I’ve been through and everything the team and Bjarne have done for me, I’m totally convinced that I can be even better yet.”Cance’s boss Bjarne Riis now faces a nervous 24 hours until Saturday’s 53km race Time Trial is over, with Aussie Evans poised to overhaul CSC’s race leader Sastre. Riis said of Cancellara’s renewal, “What Fabian has achieved since he joined us is very unique and we’re extremely lucky to have someone like him, who can win the great Spring Classics and is the best time trial rider in the world. Apart from being an exceptional rider Fabian also has a fantastic personality and is great to work with. He’s very popular amongst his teammates and he’s presence is vital to the team in a social sense as well. With this extension we’ve take a crucial step towards the future for our team.” Nicknamed Spartacus for his resemblance to actor Kirk Douglas (who played Spartacus in the movies) 27 year-old Cancellara has 46 career wins, with 9 victories in 2008 including Tirreno-Adriatico and Milano-Sanremo. 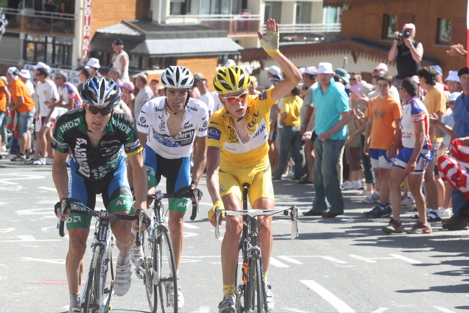 Rasmussen Appeals Dutch Compensation Decision
Danish cyclist Michael Rasmussen said Friday he will appeal the decision of a Utrecht court which awarded him 665,000 euros (one million dollars) against his former Rabobank team for the way he was kicked off their 2007 Tour de France team. The 34 year-old Dane, who instituted proceedings for unlawful dismissal demanding damages of 5.5 million euros, explained, “We’re appealing the decision from Utrecht. My advisors and I agreed on that yesterday.”While wearing the Maillot Jaune in the 2007 Tour, Rasmussen was thrown off the race by Rabobank for supposedly lying about his whereabouts when he was being sought out for doping tests. A judge in Utrecht ruled this month that Rabobank had been entitled to dismiss Rasmussen from the team but that they followed the wrong procedure. Rabobank had wrongly gone for Rasmussen’s immediate dismissal, a procedure that can only be used on urgent grounds: immediately after the uncovering of the facts warranting such action. However, Rabobank did not seek to look into the situation and fired the Dane wrongly. The Dutch judge decided that Rasmussen should receive the equivalent of two months salary and the 400,000-euro bonus he would have been awarded as Tour de France winner, amounting to 665,000 euros.However, Rasmussen’s lawyer Karoly Nemeth explained Friday that the judge had not taken a number of points into consideration and his client had not received sufficient compensation. “I can say for example that Rasmussen was not compensated for all the stages he won and for which he should have been paid,” Nemeth told Danish television station TV2. Rasmussen is also considering an appeal of the decision by the Monte Carlo Cycling Federation to suspend him for two years for missing drug tests to the Court for Arbitration in Sport. 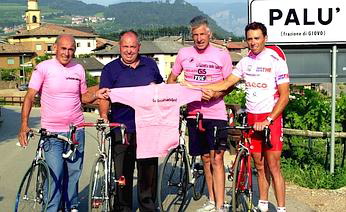 Enzo Moser Dies In Accident
Enzo Moser, the older brother of Francesco Moser, has died in an accident in Giovo, Italy. The 67 year old was working in his vineyard this afternoon when he was crushed under a tractor he was driving. Born November 5, 1940, As an amateur, he won the prestigious Trofeo Alcide De Gasperi in 1961 and turned pro the next season for San Pellegrino, where he won his local pro race, the Giro del Trentino. A superb climber, Enzo Moser was a pro rider from 1962 to 1967. Moser’s greatest moments as a pro came in 1964 while racing for the Lygie team, when he wore the Maglia Rosa for two stages and then gave it up to Jacques Anquetil, who went on to win the race. Moser was a partner with his younger brother Francesco in Cicli Moser until the company was sold a decade ago and always worked on his family farm and vineyard in the Val di Cembra, northeast of Trento. Enzo Moser is survived by his wife and four sons.
Road Bike Action & AFP