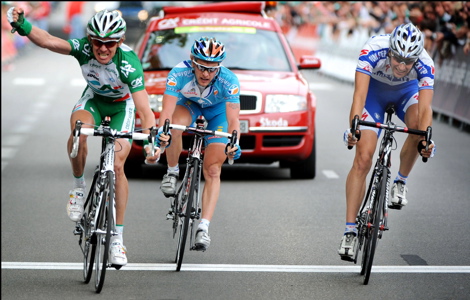 Credit Agricole rider Dmitri Fofonov of Kazakhstan’s has tested positive for a banned stimulant, Heptaminol, on Stage 18, his team said on the final day of the Tour de France Heptaminol is an amino-alcohol which is classified as a vasodilator and is sometimes used in the treatment of low blood pressure and hypotension. The 31-year-old, who learned of his positive test after finishing 19th overall in the race on Sunday, explained to his team he bought a product over the internet to fight cramps. Fofonov has been suspended and may now be fired. ” Fofonov has failed to respect our basic team rules,” Credit Agricole manager Roger Legeay told AFP. “No products can be taken by any riders unless they have prior authorization from the team doctor. “He has made a mistake, which can happen, but it’s not good news for us or for him.”

Fofonov is the fourth rider from the Tour to test positive for a banned substance. The 31-year-old Fofonov, from Almaty, turned professional in 1998. Since 2000 he has competed with only French teams, picking up just three wins: the national time trial title (2000), a stage on the Tour of Catalonia (2002) and the final stage of the 2008 Dauphine Libere in Grenoble this past June. 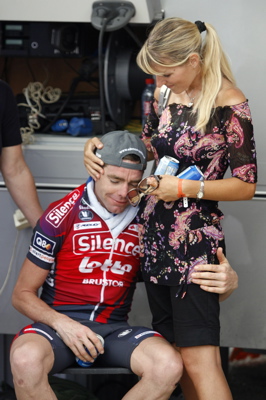 Evans Cries Uncle To CSC
After his less than brilliant time trial performance on Saturday, Silence-Lotto’s Tour runner-up Cadel Evans was “very disappointed” with a performance that cost him dearly.  “I’m not devastated, just very disappointed. I felt like I rode a good time trial,” he said admitting he was “very surprised” by Sastre’s time. But Evans’ Silence team manager Marc Sergeant said, however, he had been expecting more. “I expected better (from Evans). To win the Tour we would have had to finish in the top three in the time trial,” said Sergeant, who felt Evans lacked the form that allowed him to finish ahead of all of his Maillot Jaune rivals on the fourth stage time trial at Cholet. Sergeant said, “If he had raced like he did at Cholet, he would have won the Tour, but Cadel just didn’t have the legs.”

Evans elaborated on the crucial time test, saying “I was really surprised when I heard the first time check from Kohl, I thought I was doing good, then I was in shock. There’s three or four guys who did the time trial of their life. But what could I do? I gave it everything, and it wasn’t enough.” Sastre’s Tour win was built on his attack of Evans on  L’Alpe d’Huez, where he beat the Aussie by 2’15” to take the gc lead by 1’34”. Sastre talked about the power and support of his CSC-Saxo Bank squad at this year’s Tour, saying “You only have to look at a rider like (Fabian) Cancellara to see what we’re all about,” said Sastre. “He sacrificed his chances of winning the Stage 20th time trial by working hard for me in the mountains.”

On the other hand, Evans had little team support in this years Tour and knew it coming into the race. “It comes down to also the fact they (CSC) have two, two and a half times the budget we do, and straight away that can buy much better  quality riders. CSC had the most incredible team, with three guys capable of winning the Tour so they deserved to win.” Evans added: “When people are almost looking at me as the Tour favorite it puts me in a difficult situation. It’s not an easy task when you’re racing  against a team that has three guys who are attacking you.

Sergeant has always recognised his team’s relative weakness to CSC, saying “Popovych didn’t manage to do what we’d hoped at the L’Alpe d’Huez stage and if he’d managed to help limit our losses, we could have been 40″ behind Sastre, not 1’34”, so now we’ll look and see how we can strengthen the team in the future.” And Evans says this won’t be his last shot at the yellow jersey.  “I was making a good progression there, eighth (in ’05), fourth (’06), and second (in 2007). But from second to first is maybe the hardest step. But I think I’ve got three or four good tours left in me.” 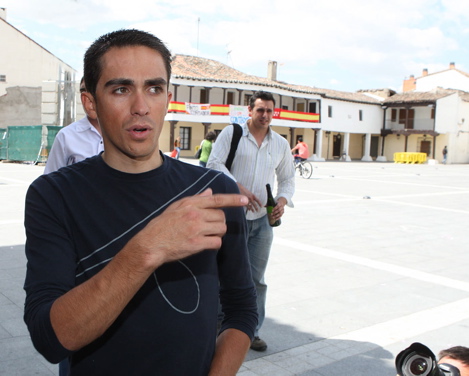 Contador Comments On Le Tour 2008
Unable to defend his 2007 Tour De France title, Astana’s Alberto Contador was at least happy to know that another Spanish rider, the well-liked Carlos Sastre. “Given that I wasn’t allowed to defend my Maillot Jaune this year, it’s nice to see that another Spaniard could win (the Tour) this year. Carlos has never stopped improving as a rider and he rode the time trial of his life yesterday.” Contador and Astana are hoping that in 2009, they will be invited to the 96th edition of the Tour De France. Another Spanish rider, Alejandro Valverde (Caisse d’Epargne) was in this years Tour unlike Contador, but shared the same sentiments. “I’m happy that the Tour will go to a Spanish rider and you have to give Carlos Sastre congratulations.” 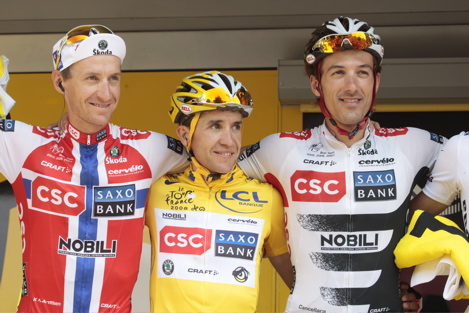 Sastre: the Eighth (Seventh?) Spanish Tour De France Winner
Carlos Sastre became the eighth Spaniard to win the Tour de France Maillot Jaune in Paris when he wrapped up overall victory on Sunday, taking Spain’s total to 11 wins. But some may differ with this total. Climber Federico Bahamontes, nicknamed the ‘Eagle of Toledo’ was the first Spaniard to win Le Tour in 1959. 14 years later, it was the great Luis Ocana, who claimed his only Tour win in 1973 and it took another 15 years for another Spanish Tour champion when Perico Degado won in 1988. Three years later in 1991, it was the great Miguel Indurain’s turn to win the Tour De France, when began a five-year dominationof Le Grand Boucle. Although the Tour De France bosses awarded Spaniard Oscar Pereiro the 2006 Tour title, most cycling observers agree that the journeyman Pereiro could never win the Tour unless American Floyd Landis, who tested positive for testosterone during the Tour’s Stage 17, was disqualified. Last year, Discovery Channel’s Alberto Contador claimed his first Tour victory in 2007, but was not allowed to ride in 2008 by Tour bosses, while CSC-Saxo Bank’s 33 year old Carlos Sastre triumphed this year. 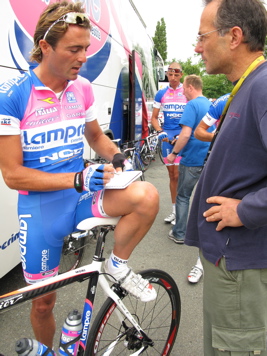 Massimiliano Mori: Le Tour De Tour
Lampre pro Massimiliano Mori has wrapped up his 7th Tour De France and the 13 year pro rider from San Miniato near Firenze is happy to see Paris. “The final stage was really fast”, Mori told RoadBikeAction.Com, “as it always is.” Although he is not well know to many fans, Mori is considered one of the most experienced support riders in the peloton and has been there for Mario Cipollini at Saeco and Domina Vacanze, Marco Pantani at Mercantone Uno and for the last two seasons at Lampre, Damiano Cunego. When Cunego crashed on Stage 18, Mori and his Lampre teammates were slightly ahead of Cunego when he got his wheels caught in a gap in the road on the outskirts of Vizille after 28km. They had to wait for Cunego, who hit his head on the sidewalk and was dizzy and disoriented. “Damiano really hit hard and was not himself after the crash”, explained Mori. “He kept asking us if we were going to get back to the peloton even though we were only riding 20km/hr. It was a really difficult situation and I have to hand it to Damiano on his grinta (toughness)”. An optimistic Mori used his long experience to look on the bright side post-Tour. “Well it was an unlucky Tour for Lampre but we’re sure that our luck will change.” Like the consummate team rider he is, Mori ignored any chances he might have for his team leader and finished up the 2008 Tour in 140th, 3h37’22” behind winner Carols Sastre.