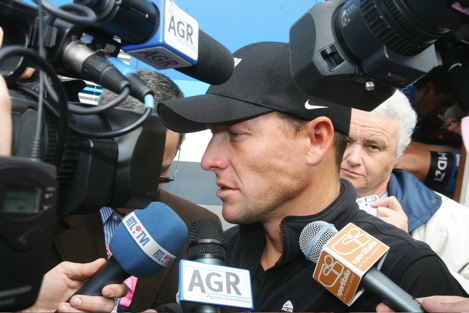 After attending a National Call to Action on Cancer Prevention and Survivorship, sponsored by the Canyon Ranch Institute at the National Press Club in Washington D.C., an event where Lance Armstrong joined four previous U.S. Surgeons Generals in the fight against cancer, the seven-time Tour De France winner took time from his busy schedule to talk to Road Bike Action about the Tour De France and life in general.
We asked Lance Armstrong why Tour De France defending champion Alberto Contador of Team Astana was not racing in the 2008 Tour De France.

Road Bike Action: Lance, why do you think Alberto Contador should be at the 2008 Tour De France?

Lance Armstrong: Well he should be there because he was implicated in nothing. There were some press rumors around Operation Puerto but there was nothing there. Contador should be there because Astana is a
totally different organization than it was last year or two years ago and when Johan Bruyneel took over the Astana team, he had stipulations when he took over that the team would implement internal drug testing from Dr. Rasmus Dammsgard for the (Astana) team. You know, the Tour De France is the best and biggest bike race there is, therefore it deserves to have the best riders, especially when they have nothing impeding them, no suspicions revolving around them. So Alberto Contador deserves to be at the Tour this year. He is the defending champion so I find it a little silly that the #1 (dossard) goes to someone else. The #1 should go to the defending champion of the race. 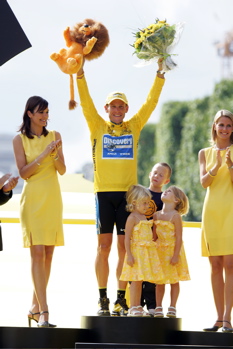 RBA: What about what you recently called the “Armstrong-Bruyneel’ penalty?

LA: Well I am not trying to make an egotistical stagement at all. But last year, Alberto and Johan won the Tour for Discovery Channel, and during that 22 days, (Tour director) Christian Prudhomme didn’t ever once
appear and at least shake Johan (Bruyneel’s) hand, so clearly there is some animosity and tension there. I don’t know why the director of the Tour De France would have such an attitude, but everybody in cycling knows that if you polled the riders and polled the teams, Astana and Johan and Alberto, people are there 100%. They should be in the Tour; it’s illogical that they are not.

RBA: Lance, today Carlos Sastre took the stage win and Maillot Jaune on L’Alpe d’Huez. As a two-time winner on L’Alpe, whats it like to win on the mythical ascent? Why is it so special?

LA: There is so much history there. The biggest names in cycling have won there over the last half-century. Fausto Coppi won there, it goes all the way back to him until today. The switchbacks make it interesting too,
the public says ‘oh 22 switchbacks’ so they can put a number on the climb. (L’Alpe d’Huez) IS the most popular climb for the spectators; they come weeks in advance and camp out…there is a lot of atmosphere on that climb to L’Alpe d’Huez.”

RBA: What about Carlos Sastre? You raced with him, you know him…what is he like?
LA: Sastre is a obviously a very good rider, always been a great climber, always been a great teammate and I’ve always seen from afar how dedicated he was to his team. So it’s nice to see Sastre get a victory. Great climber, good guy and he was one of the first Spanish riders other than Chechu (Rubiera) who spoke good english so I could communicate with him. Sastre was always one of the guys who was on our short list of guys we were interested in. I don’t know if (Sastre) can hold on to the Maillot Jaune until Paris, but I am definitely happy for him.

RBA: Lance, as a rider you dominated Tour De France timetrials in your cycling career. Sastre leads Cadel Evans by 1’34” with a 53km TT on Saturday likely the decider. What is your Tour De France calculus for this situation?

LA: Well 53km is pretty long for a time trial, so two seconds per kilometer for Evans to make up isn’t that much to have to make up. Obviously, it all comes down to two guys, so any variation on those two performances…so if Carlos has an amazing day and Cadel has an average day, than I think (Carlos) will win. If they both have good days, normally Cadel should win pretty handily. But you know what,?  Carlos Sastre will be in the Yellow Jersey and that has it’s own set of…I think it encourages people and motivates people. 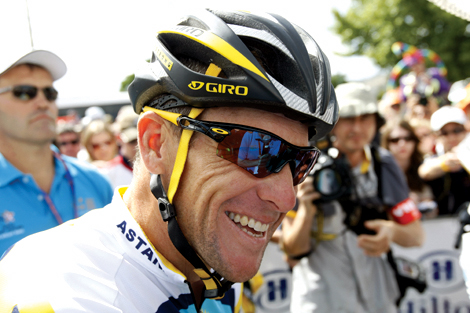 RBA: Lance is the legend that the Yellow Jersey gives you wings true?

LA: Maybe the first day you have it, but after that, to be honest with you, there’s times when its…whoever first said that was probably some slacker French guy who couldn’t get out of his own way! In a lot of ways, having the yellow jersey is a heavy jersey.

RBA: What else is going on in your life, Lance? I know you have recently launched a new Livestrong.Com website and opened a new bike shop in Austin, Mellow Johnny’s, not to mention the ongoing fight against cancer via the Lance Armstrong Foundation. Do you ever get bored?

LA: No, no, (laughs) we stay too busy to get bored! It’s been a good summer; the kids and I have enjoyed a lot of time together doing just random things. I was at RAGBRAI in Iowa this weekend and rode the final day, like 60 miles. This week I’ve been busy with some events and am in Washington DC, headed for Columbus, Ohio where we’re doing our annual Livestrong summit.

RBA: What about your marathon running? Are you in the NY Marathon?

LA: Yes I am but I’m putting a lot more emphasis this year on the Chicago Marathon on October 12th, to try to run a little quicker on a faster course.

RBA: We know that your main focus is the Lance Armstrong Foundation and the fight against cancer. How are your initatives going with this?

LA: Things are going very well with the Lance Armstrong Foundation regarding the work we are doing. We are encouraged with this and I think our constituents are as well. At the end of the day, we are still dealing with a monumental problem that kills 560,000 Americans every year and it’s not going to go to 100,000 next year. In a dream case scenario it would at least be cut in half. So we’re in the middle of this war on cancer and although there are a lot of distraction lately with the economy, it’s a tough war to wage. We want to remind everyday people about their health risks and their lifestyles, and also to remind the President to be involved in the fight against cancer and to allocate the appropriate funding to address the issue of the fight against cancer.

Vuelta a Espa¤a Stage One Report