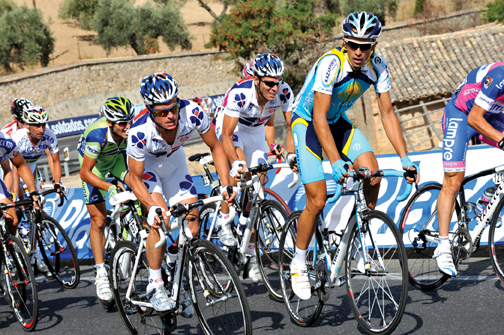 Contador And Leipheimer Lead Astana’s Domination At The Vuelta a Espa¤a
After Stage eight of the Vuelta a Espa¤a Team Astana’s Levi Leipheimer led the overall race with Alberto Contador a close second. Contador’s aggression in stage eight had dropped favorite Carlos Sastre of Team CSC-Saxo Bank by five seconds and helped Leipheimer move back into the Golden Jersey. Leipheimer now has 21-seconds over Alberto Contador and 49-seconds over Alejandro Valverde of Caisse d’Epargne.

Astana team leader Alberto Contador expressed his pleasure in Leipheimer regaining the gold jersey of race leader ‘I am very glad that Levi captured the golden jersey again. It shows that our team is very strong. What all my Astana teammates did today was amazing. The only thing I regret is that again the time differences are so small. They could have been more substantial if Alejandro had cooperated a bit more with Igor Ant¢n and myself. I don’t understand why he didn’t do that. Also for him it was in his interest to gain more time on Carlos Sastre. The Pyrenees provoked no decision. The mountains and time trial in the last week will decide who will win this Vuelta.”

When asked if he was still riding for Contador, Leipheimer responded quickly by saying, “Certainly. Alberto has an acceleration uphill like nobody else has. You can see it when he attacks. Maybe only a good Valverde can follow him then. Alberto won the Tour and the Giro and is the best climber in the world. He is the number one captain on the team. I just have to follow everyone right now as I am ahead in the classification, but in the end Alberto will be the captain. The final climb yesterday and the final climb today were not so hard. They are not steep enough that big time differences can’t be made.”

Despite being first and second in the overall standing Astana to this point has been happy to let the other teams have the jersey. ‘We didn’t contest Sylvain Chavanel, but realistically I can’t beat him in the sprint. He would get the jersey, no matter what, but to make it easy we collaborated a little bit with him. It was good for us to save the team. Ballan on the other hand was really very strong yesterday. They both earned their jersey.” said Leipheimer. 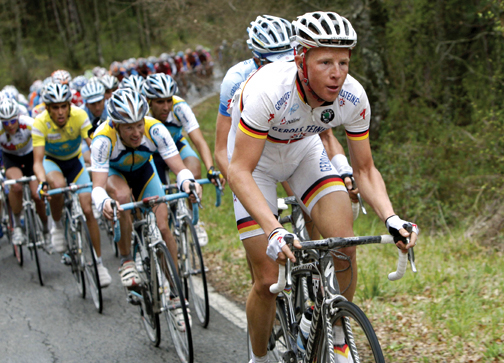 Milram Aggressively Signing Riders
Team Milram confirmed Sunday they had recruited three former Gerolsteiner riders and revealed they are in negotiations with newly crowned Tour of Germany champion Linus Gerdemann. The 25-year-old German, who wore the yellow jersey for the entire Tour of Germany, is under contract with the American Columbia team until 2009, but is being courted by Milram.

Gerolsteiner are without a sponsor for next year, which has led to a mass exodus of riders over to Milram ? who are potentially the only German team on the ProTour level in 2009. Milram announced they have signed climbing specialist Fabian Wegmann, Thomas and Markus Fothen and Gerolsteiner directors of sport, Christian Henn.

Last week Germans Johannes Froehlinger and Matthias Russ both signed for Milram from Gerolsteiner. Columbia’s Gerald Ciolek, the 2006 U-23 world champion, is another Milram target and general manager Gerry van Gerwen said they want to sign Gerdemann by the conclusion of the world championships later this month. “We want to have the issue decided by the time of the worlds and in 2009 we want the team to be 80 percent German,” he said.

Milram is changing the focus of the team away from their past, where sprinters Alessandro Petacchi and Erik Zabel were the team leaders. Petacchi was dismissed in May after testing positive for salbutamol during the 2007 Tour of Italy, while Zabel’s career is coming to a close. Milram has extended their sponsorship of the cycling team for an extra year until 2010.

Petacchi Is Back, Wins Stage One Of Tour Of Britain
Alessandro Petacchi of the LPR Brakes team made his return to racing in style by powering his way to victory in the first stage of the Tour of Britain. Petacchi timed his sprint perfectly to beat Rob Hayles of Great Britain and Magnus Backstedt of Garmin-Chipotle. Second place finisher Hayles expressed his disappointment in not winning. “I feel very disappointed, I would have loved to get a victory for the home crowd but at the same time you’ve got to hold your hands up to riders like Petacchi. I don’t mind getting beaten by riders like him because he’s a fantastic rider.’

The CSC Saxo Bank team made the big effort to bring back the break with two laps to go. The race was altogether for the final sprint with Petacchi opening up a gap in the final 200-meters. By winning the first stage Petacchi also takes control of the leader’s yellow jersey.

Correction: Despite reports yesterday that Mark Cavendish would be contesting the Tour of Britain he will in fact be participating in the Tour of Missouri, which begins on September 8th.

O’Bee Signs with Bissell for 2009
2001 and 2007 US criterium champion Kirk O’Bee has signed a contract with the Bissell team for 2009. O’Bee will be moving from his current team of Health Net-Maxxis.  In his move to Bissell O’Bee will be reunited with former teammate Glenn Mitchell, who is now director of the Bissell team.