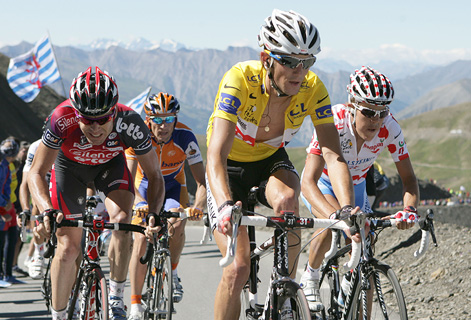 Given his reputation as a solid time trial rider, former yellow jersey Cadel Evans (Silence-Lotto) sits in a favorable position after Tuesday’s tough mountain stage to Jausiers. Evans finished 11th on Stage 16, safely in the company of the Team CSC-Saxo Bank juggernaut of Frank and Andy Schleck and Carlos Sastre. Frank Schleck currently leads the race overall with a seven second gap to Gerolsteiner’s Bernhard Kohl and just one more second on Evans on the eve of the queen stage to l’Alpe d’Huez.

“Tomorrow’s going to be the mountain stage of the Tour, so it’s a long way from being over yet,” said Evans, whose ride Tuesday allowed him to take 35 seconds from key rival Denis Menchov (Rabobank), himself a solid rider against the clock.

For the second time in this race Evans avoided crashing out after just missing a parked motorbike as he tried to follow an attack on the descent to Jausiers. “I was a bit unlucky on the descent, I wanted to go with (Samuel) Sanchez when he went and just in the corner when I went to pass him a motorbike was just stopped on the exit of the corner,” he added. “That gave him 200 metres and he stayed there until a kilometre from the end.”

CSC team manager Bjarne Riis admitted that adverse wind conditions atop the day’s second unclassified climb, the Cime de la Bonette-Restefond, had scuppered their plan to leave their rivals in their wake on Tuesday. The Dane, who won the 1996 Tour de France, said his riders will have Evans in their sights, although he admitted that the qualities of recuperation of each contender will be a big factor.

“To be honest I expected him to stay with us today,” Riis said of Evans. “There was a lot of wind so it’s just easy to sit on the wheels. Everybody suffered a lot today, everybody made a lot of sacrifices and some will pay for that in their legs tomorrow. But hopefully not us.”

“I think the big battle will be on the Alpe d’Huez, but after the Galibier and the Croix de Fer if you’re suffering on the Alpe d’Huez you can really lose a few minutes,” Riis explained. “If you go too deep today, you pay for it tomorrow.”

Another Rider Over the Edge

South Africa’s John-Lee Augustyn (Team Barloworld) admitted he was lucky to escape with his life after a spectacular crash during the 16th stage of the Tour de France Tuesday left him halfway down a mountain side. Augustyn crossed the summit of the day’s second unclassified climb on his own after attacking his leading group half a kilometre from the summit. But moments later, after being rejoined by his group, he misjudged a right hand bend and flew over the edge to leave him 50 metres below on the gravelly mountain side. After dusting himself off and waiting for a new bike he eventually finished in 35th place at just over five minutes behind stage winner Cyril Dessel of the AG2R-La Mondiale team. Augustyn was unhurt, but he admitted he had been lucky not to suffer another nasty break having broken his femur in August last year.

“I was lucky to get away with no injuries,” he told AFP at the finish line. “Just before I went over the side I thought, ‘shit, I’m going to break something again’ and it’s going to be terrible.”

“I took the wrong line and was just going too fast,” he explained. “I saw the corner coming, and tried to brake, and I hit the corner and went over the side. I was lucky to come to a stop again and get back to the top.”

After his spectacular plunge Augustyn had to be helped back up by a bystander, who walked gingerly down the slippery gravel slope to lend him a hand. One of the South African’s first remarks to a race official who eventually came to his aid seemed to refer to the loss of his bike. It had slid further down the mountain side after he came to a stop.

“I don’t even remember making that gesture,” he added. “All I remember was that the guy I was talking too didn’t speak very good English!”

Two minutes later Cadel Evans, racing in the yellow jersey group of race leader Frank Schleck, just avoided crashing into the motorbike official attending to Augustyn. Evans finished the race unscathed. Following some solid displays in the mountains Augustyn appears to have a promising future as a climber. But he all but admitted his downhills will need some working on.

“I didn’t have the very best legs at the start (of the stage) but on the climb I got my rhythm back and it went good,” Augustyn added. “On the descent, I think I just took a few too many risks.”

Pereiro Not So Lucky

Tour de France champion Oscar Pereiro admitted Tuesday that he thought he was going to die after a spectacular fall during the 15th stage at the weekend. The Caisse d’Epargne rider toppled over a guardrail on his way down Col Agnel in the Alps between France and Italy, falling several metres onto the road below.

“I was going much faster than those on the left. I think that (Damiano) Cunego got a slight fright. He made an abrupt manoeuvre and I couldn’t avoid him,” Pereiro told the Spanish press.

“I went over the barrier and I saw… I had a vision from high above. I saw myself in the air and hit my head. I though I was going to die and hoped to feel nothing. To be unconsious when I hit the ground.”ÿ

Pereiro, who was in 15th position when he crashed out of the race, suffered a fractured arm and was due to undergo surgery in Vigo, Spain on Tuesday. The Spaniard was declared the winner of the 2006 Tour de France after American Floyd Landis was stripped of the title for taking testosterone.

The Saunier Duval cycling team looks set to be excluded from the Tour of Germany in the wake of its doping positive in the Tour de France last week, race organisers revealed on Tuesday. The team withdrew from the Tour after Italian rider Riccardo Ricco failed a doping test and subsequently sacked both him and compatriot Leonardo Piepoli, winner of Stage 10 at Hautacam. However that move has failed to placate the organizers of the Tour of Germany. which runs from August 29 to September 6.

“There is absolutely no question of having Saunier Duval on the starting line,” race director Kai Rapp told Suddeutsche Zeitung in an interview to appear on Wednesday. According to Rapp he is totally within his rights as the team have sullied the image of the sport, which under the International Cycling Union (UCI) charter entitles a team to have their licence withdrawn. “In Saunier Duval’s case I think they fill that criteria 100 percent,” said Rapp.

Saunier Duval’s management voluntarily suspended all racing activities in the wake of Ricco’s positive, but the pre-emptive strike from the Tour of Germany organizers does not bode well for a smooth return to the peloton.