Rolling On Wheels Of Wood 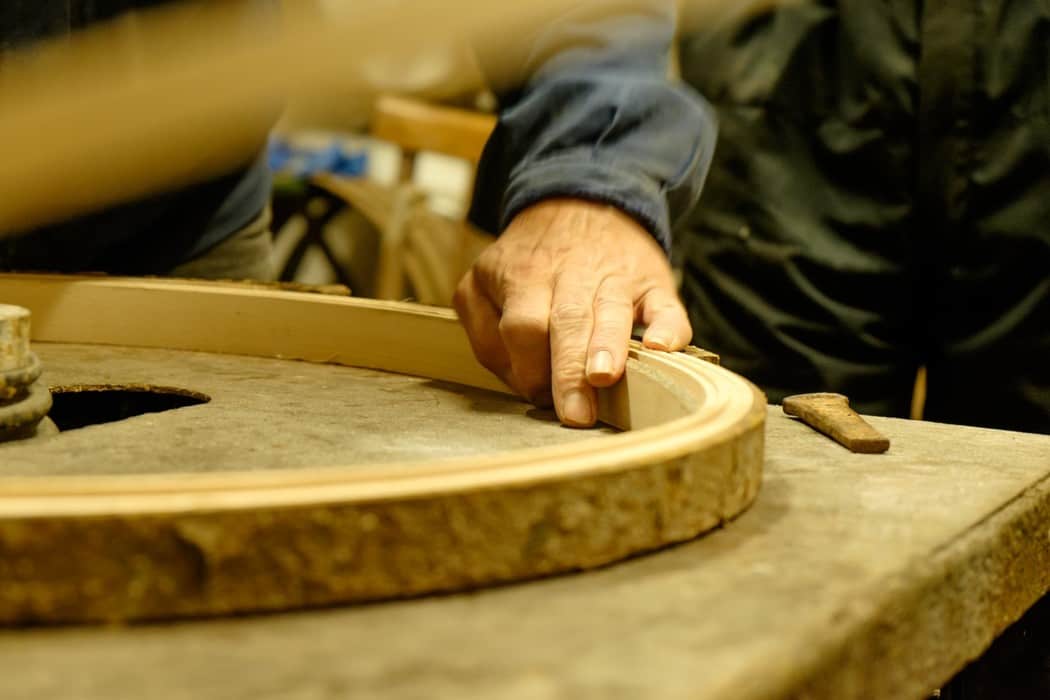 Every now and then—well, maybe even a whole lot less than that— I come across something that really grabs my attention and tugs at my cycling heart as if I was full-on descending on a slippery slope leading to a dry stone wall. Two years ago, as I was bumbling about at the giant two-wheeled maze that is the Eurobike show, I spotted a small, out-of-the-way booth that simply teemed with gawkers. At that time in the morning I ﬁgured free beer must’ve been the attraction, so naturally I gravitated to the booth with high hopes.

And what did I ﬁnd? It turned out to be something that some at least might feel was much better than free beer. It was a little old Italian man with his half-cut spectacles clinging to the end of his nose. This sight was especially odd since, as we all know, Eurobike is the biggest and baddest bike show on earth. It’s the venue for accolade-graced manufacturers and technical gurus to strut their new stuff and show off to the rest of the cycling world that they have a ﬁ rm grasp of the latest marvels in pedal technology. And yet here sat the old man who was obviously somewhat bewildered at all the attention he was attracting. Just who was this little old Geppetto-like character? 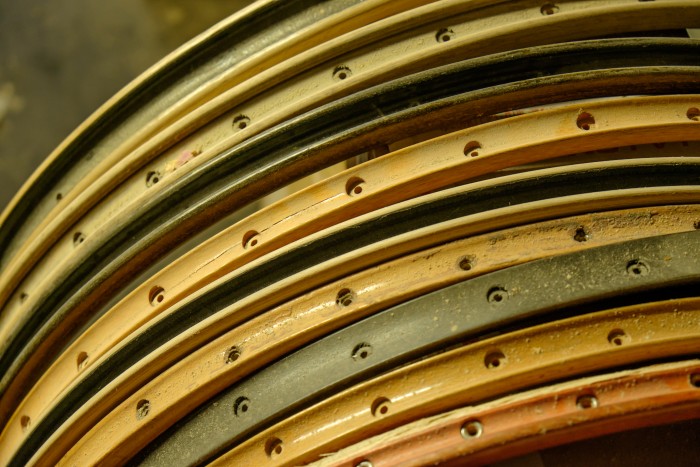 WHY WOOD?
As I walked into the booth, I read the name tag that dangled from his neck. It read Giovanni Cermenati. As I soon learned, he is the current elder and maestro of a small northern Italian workshop that makes Ghisallo wooden rims. Wait, there’s no need to adjust that dial; we’re talking wood rims, as in circa 1919! And, Giovanni represented the second generation of the family business dedicated to the grainy hoops.

Yes, these bright wooden hoops are pure art, just the kind of thing you’d want to have hanging on your wall, but they exist for function and not simply for ﬁxation and form. But how the heck could they possibly hold up in this modern, epoxy-based world where everything is super high-tech and engineered by computers and rocket scientists?

Now, I’m not really one for nostalgia or retro, but I think many of you would agree that certain things from the pre-Internet world were just better in many ways. Not to say that steel frames are a match for carbon, or that wooden rims could cut through the wind tunnels like a deep-section carbon ﬁber wheelset, but many things of old did ﬁnely blend form as well as function. These wooden rims certainly had the form. As for function, well, that one I only managed to follow up on a few months later when I ﬁnally made my way to the Ghisallo workshop to see them made and give them a ride.

SANDPAPER ANYONE?
There’s been a huge, cult-like retro revival in cycling during the past few years, with many new-found custom builders claiming artisan status. Even a number of older brand names are enjoying something of a revival, largely thanks to a blend of savvy marketing, events such as L’Eroica, and a growing band of slightly older and more afﬂuent cyclists looking for something a little different than the mass-produced carbon horses that seep out of a plethora of Asian stables at a nifty rate. 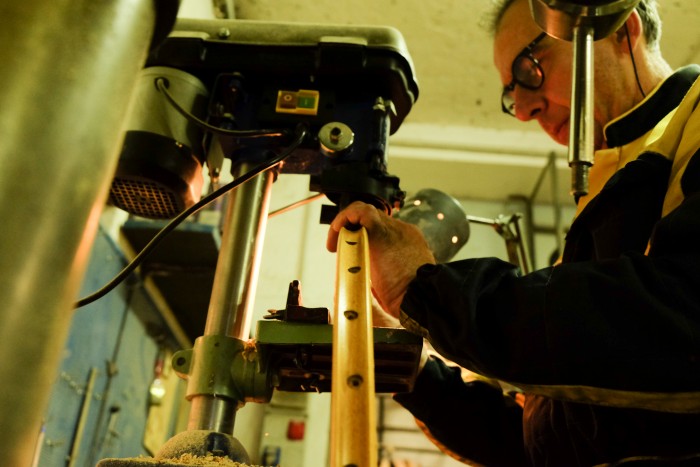 Ghisallo, on the other hand, is neither a born-again retro brand, nor an extortionately priced product made off the back of some unsuspecting South American goat whose coat got mailed to China. Nor have they come to artistic prominence through pretentious marketing. No, this family-run business is made up of true grindstone cowboys. They’ve been in the wooden-rim business for decades, more than six of them in all.

Wooden rims are nothing new in cycling. In fact, they were all that was used in the early days until the ﬁrst aluminum rim (made by Mavic) appeared at the 1934 Tour de France (masqueraded to look like a wood rim). Antonio Cermenati, the father of Giovanni, was the ﬁrst of the family to be involved in the manufacturing of wooden rims, and he was a partner in the legendary D’Alessandro rim manufacturing company in Milan.

When D’Alessandro retired, the ravishes of war were upon Milan, and so Cermenati took over the tooling of the company and moved his family to the safety and tranquility of the small village of Magreglio, just a few hundred meters away from the Madonna del Ghisallo and the Ghisallo Cycling Museum, which was patronized by Tuscan cycling legend and three-time Giro d’Italia winner Florenzo Magni, a good friend to Cermenati who also won the Tour of Flanders on wooden rims as late as 1949, ’50 and ’51.

During the late post-war era, metallic materials such as aluminum were in short supply, which created a short-lived resurgence in the wooden-rim trade: “After the war aluminum was hard to ﬁnd, and we had some Australian ofﬁcers come to us and buy a whole batch of wooden rims, which they had shipped back home,” Antonio Jr., the third generation of the Cermenati wheel-building dynasty, told me. 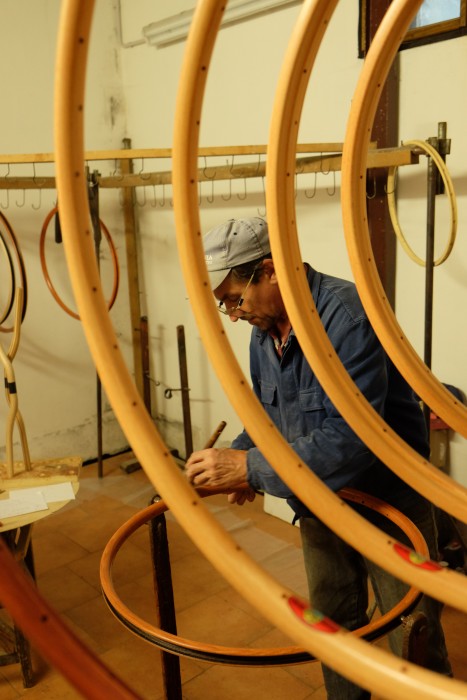 Although wood has all but been replaced—ﬁrst by aluminum and then by carbon—it is currently enjoying a mild resurgence: “We keep working on new products and sell around 1000 to 1500 units a year in all, including rims, fenders and handlebars,” Antonio estimates.

Somehow I’d imagined Ghisallo to be quite an upmarket and big setup, but in reality it was humbling and refreshingly low-key. Even with directions in hand, I’d driven past the shop a few times, as there was no visible sign of the workshop outside. Just as I was beginning to wonder what it was all about, if I was even in the right place, young Antonio crawled out from beneath a Fiat to greet me.

As it turned out, a small local car-repair garage acted as the facade for Ghisallo, with the rim shop found out back in a place that was almost anonymous, much as the approach is of these unsung master artisans. Reﬂecting the modern economy, it’s been the car garage that’s put the bread on the table, and has done so more or less since the family moved here.

FROM THE SEED
On the opposite side of the yard is a roomy and quaint old workshop, complete with cobwebs, rickety wooden chairs, dim lighting and wood shavings. It’s the real McCoy, like something you’d expect to have uncovered half a century ago, In fact, taking up some amount of space was some of the original D’Alessandro tooling, which is around 100 years old. 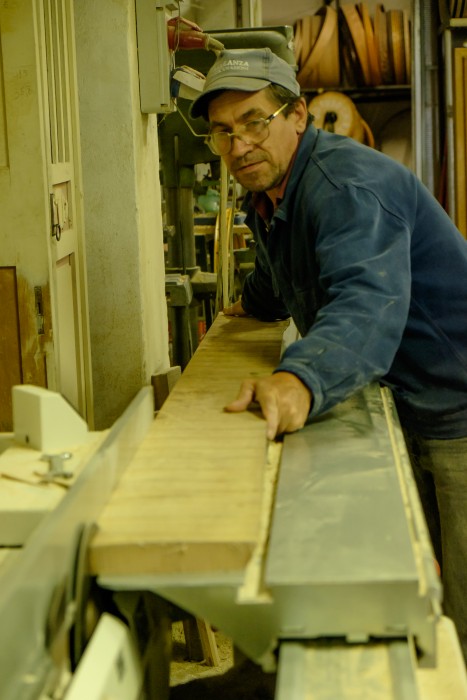 Hard at work was Boris, the main hand at Ghisallo who, along with Antonio, was only too happy to run me through the magic box of tricks that transforms trees into rims. Although almost any wood can be used to make rims (with slightly different characteristics), the tree of choice is the beech, which has long since been imported by Ghisallo from Slovenia, as it offers the right blend of rigidity and elasticity, although they now also often use bamboo too.

Using a mixture of old and new machinery and methods, the process begins with the wood being cut into narrow strips, which then have a mitered edge put on them, which is where the two ends will be joined together to complete the rim hoop. These strips are then clamped inside circular metal rim molds and glued together in several layers, which forms the basic rim. Once the layers have bonded, they are worked into the rim shape as we know it. This process starts with manual sizing on a circular saw, which, if followed by the next stage of downsizing, this is done on a “nameless machine” designed by Ghisallo themselves, and it’s the only one in existence. The rims are loaded and then run through this multi-wheeled rotating machine to ensure the accuracy of the circle. 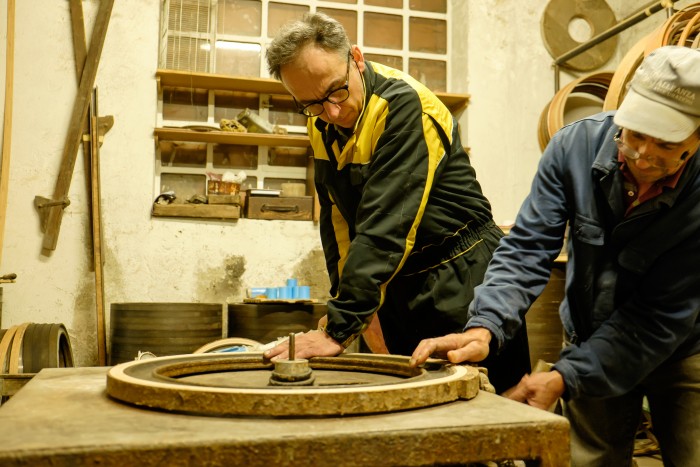 Things get more modern for the next stage, where a huge computerized machine molds and machines the rims into the exact spec required: tubular, clincher, etc. Not so long ago this process was also done manually, but this mechanism makes the process a whole lot faster and more accurate.

What follows are the ﬁnishing touches. First up comes the drilling and some hand-ﬁne ﬁnishing. The ﬁnal steps in the process of the ﬁne ﬁnishing are the coloring and lacquering and the insertion of the eyelets. This is all done by hand. It’s a simple, yet intricate and fascinating, process that is unlike any other in the bike industry today. 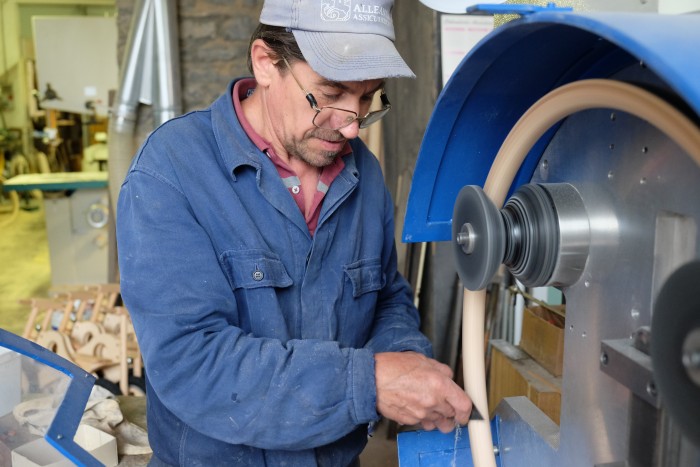 THE RIDE
There’s little denying that these rims are aesthetically desirable, but in this day and age, just how practical are they? Weight is often a deﬁning and prime factor for people when deciding on whether or not to buy a product these days, and this is often at the expense of practicality, function and comfort. So where do these rims sit on the scale? Surprisingly, they are not particularly heavy when compared to aluminum rims. There are several rims on offer, and weight per single rim varies between 350–450 grams each, plus an additional 76 grams for nipples and washers.

Durability is about as good as regular aluminum rims, but, of course, they don’t dent and can be reﬁnished from time to time to keep them looking good. When it comes to building, they do require some experience, which is not so easy to ﬁnd these days. You can buy the rims and nipples separately, although I would say that it’s well worth having them built either by Ghisallo or by an experienced wheel builder. 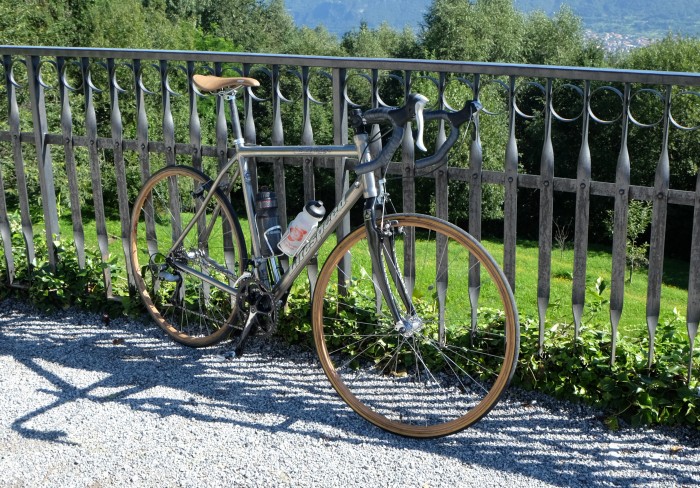 How about the ride? Quite surprising, really. I had expected them to be heavy and slightly sloppy, but they are neither. No, there is nothing like the rigidity of a deep-section carbon rim, but if well-built, they are amply rigid, comfortable, a little forgiving and, much like the hand-built wheels of 30 years ago, very pleasing to ride.

Although clincher versions are available, if you want to get the most out of the wooden-rim sensation, then it’s tubulars all of the way. I hadn’t ridden anything but wired-on rubber for many years, and the sensation of the wood, along with the ﬂexibility of the tubular, makes for a most pleasing ride quality. It’s smooth, silky and yet surprisingly responsive too. It’s easy to see why Magni chose them for the pavé.

When it came to braking performance, the wood surfaces were not as responsive as some of the modern-day rim and brake combos—again, they hark back to that woollen short sensation of 30 years ago. Braking is comfortable but not disc brake powerful (although you can, of course, have these rims on disc hubs). Brake pads are also of a speciﬁc compound, which Ghisallo also supplies. Without them you would ﬁnd issues with abrasion. The sidewalls also need to be kept clean of rubber buildup, which is a simple enough task.

While the wood rims do cost more than your run-of-the-mill aluminum rims ($150 for tubular and up to $210 for clincher), they’re certainly not excessively priced (as many retro-branded products are). Complete wheels (built with White Industry, Miche and Novatec hubs) are also available. These wheels  are not for everybody, but if you want something truly original and functional, then you can’t go wrong with a pair of wooden rims. Just knowing the big patch of history that they represent, and that they are handcrafted between oil changes in Italy by Antonio and Boris, makes them all the more special.

Check out ghisallowoodenrims.com got a full lineup of products