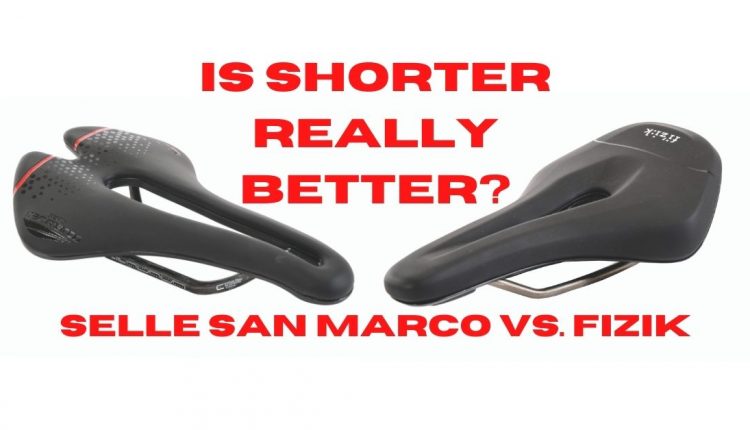 Fizik designed the Terra series to accommodate the rigors of all-road riding with a focus on compliance and durability. The Aidon designation takes compliance one step further due to its flexible nylon shell as opposed to the rigid carbon shell used in Fizik’s road-oriented Tempo and Vento series. We’re not sure what makes a move for
added comfort on an e-bike saddle, but the bike industry loves relying on segmentation.

Instead of a traditional flat-shell design, the 250mm Aidon features Fizik’s Wingflex technology and is about 40mm shorter than the popular Arione model. As the shell widens to 145mm in the rear, it also curves 1cm lower at the edges. In the curve of the shell, the nylon material is replaced with a flexible rubber that ends at the widest point of the Aidon.

The shell also uses a wave-tail design where the rear of the shell is raised similar to the iconic wavy designs of Selle SMP saddles. The most striking design feature is the mud flap that covers the center 7cm-long cutout.

The Aidon uses Fizik’s proprietary Kium “closed” 7x7mm rail design. Kium is Fizik’s proprietary alloy that is lighter than titanium with similar strength and performance characteristics that reduce vibrations. The rails are set in a closed loop to add rigidity to the system.

Fizik used their Type 2 foam padding, which is 1.5cm thick and soft compared to the Selle San Marco and other traditional road saddles. The soft padding is progressive with more foam in the rear. This complements the waved tail design to help promote an upright riding position rather than an aggressive aerodynamic posture. The compliance engineered in the construction is in line with many stock e-bike saddles, and so is the 260-gram weight, but the benefits of the cush design were evident when we began pushing the pedals. 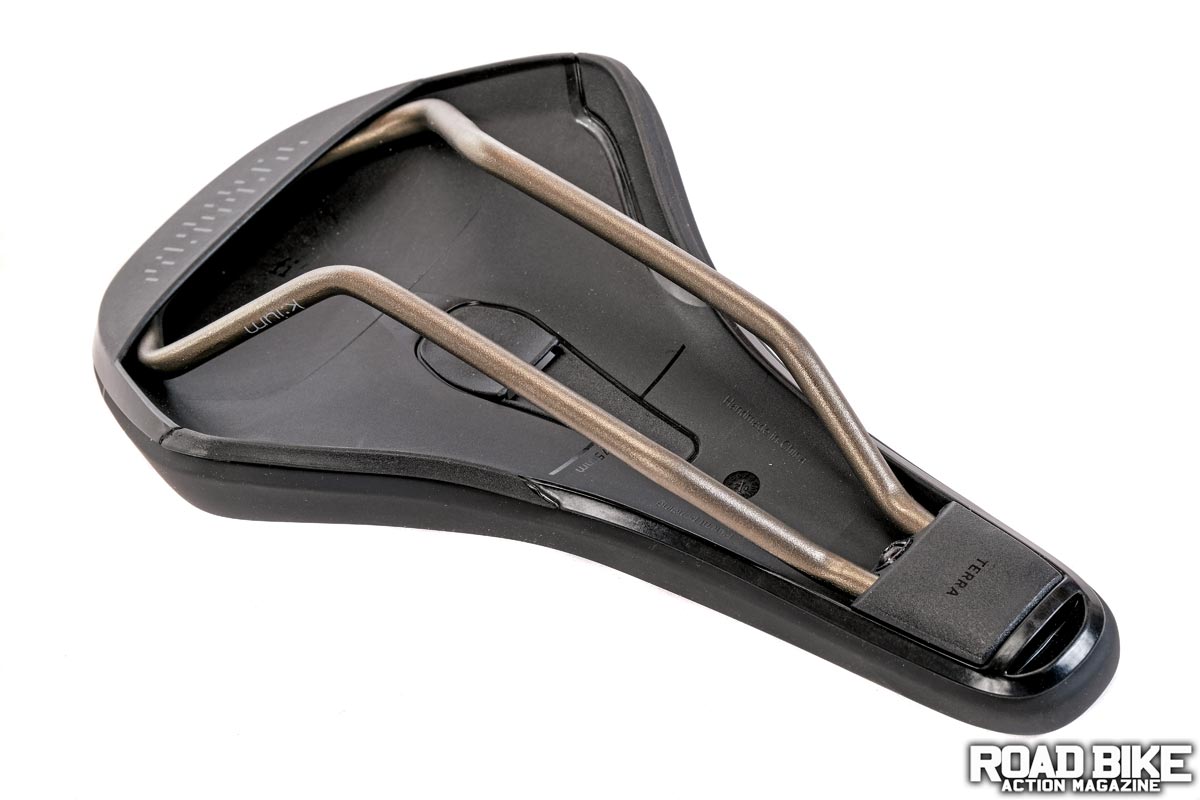 Selle San Marco has lauded the Aspide title for nearly two decades using the anatomical cutout shell design since the early 2000s. The Short Open-Fit Carbon FX is 250mm in length and marks the first time the legacy saddle brand used a snub-nosed on the Aspide, cutting 28mm off the previous iteration. Selle’s Aspide Short Open-Fit is available in four models, with the Carbon FX being the top-shelf design, thanks to its carbon rails. The 9x7mm rails are crossed in an X-pattern to increase rigidity for minimum flex in the saddle. A carbon-composite nylon construction makes up the 155mm-wide shell.

A highlight of the Aspide line is the focus on a lightweight design. Our scales tipped at 156 grams for the Aspide Short. While this is heavier than the 104-gram Aspide Superleggera we tested five years ago, the Aspide Short is half the price of the $500 Superleggera. Anatomically concerned weight weenies may want to consider the 139mm-wide, narrower version of the Aspide short, which Selle claims weighs 5 grams less than our tester. 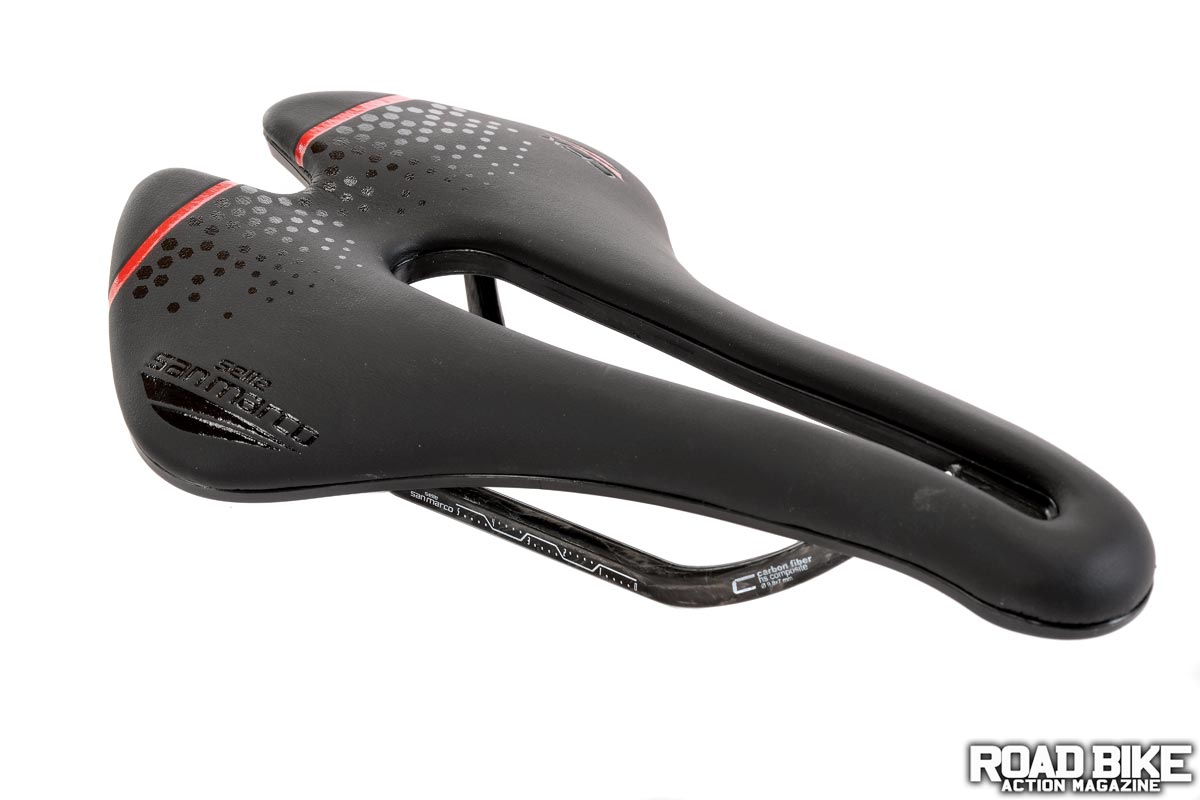 However, experienced cyclists know not to pick a saddle based on weight alone. Selle San Marco dealers have access to Selle’s idmatch smart caliper, which takes measurements of sit bones and thigh distance, then adds rider flexibility to the equation to recommend the proper-size saddle.

Selle uses their Biofoam padding which is thick at the tip and progressively denser further back on the saddle. The padding is about 1cm thinner than the Fizik throughout, which is where some of the 105 grams in weight difference comes from.

The rear quarter of the Aidon is the densest section, and the raised angle it’s placed on promotes a seated position closer to its center. This combo also makes an upright fit more comfortable due to the added lower-back support from the angle in the rear, which was especially appreciated on steep gravel climbs.

Our test riders logged multiple four-plus-hour rides all with positive notes on how comfortable the Aidon was late in the day. The padding helps riders float over bumps and cracks in the road just as well as roots and ruts in the dirt. Our heavier test riders preferred the extra padding for the bigger bumps.

Thanks to the more traditional road-style padding, seat positioning was straightforward, just be mindful that the over-sized 7x9mm carbon rails are compatible with your seat clamp. Extra padding on the negative-angled nose of the saddle promotes an aggressive, forward aerodynamic position, like a Specialized Power saddle.

The 18cm-long central cutout relieved pressure from the perineal in nearly every position, especially the most aerodynamic. However, the stiff rails paired with the mid-flex mold provided little relief on the road, which adds up on long rides.

Hard efforts are complemented by the performance-oriented design. Test riders noted that staying planted was much easier at high cadence and high power on the Selle, as the Fizik’s padding promoted bouncing in the saddle. 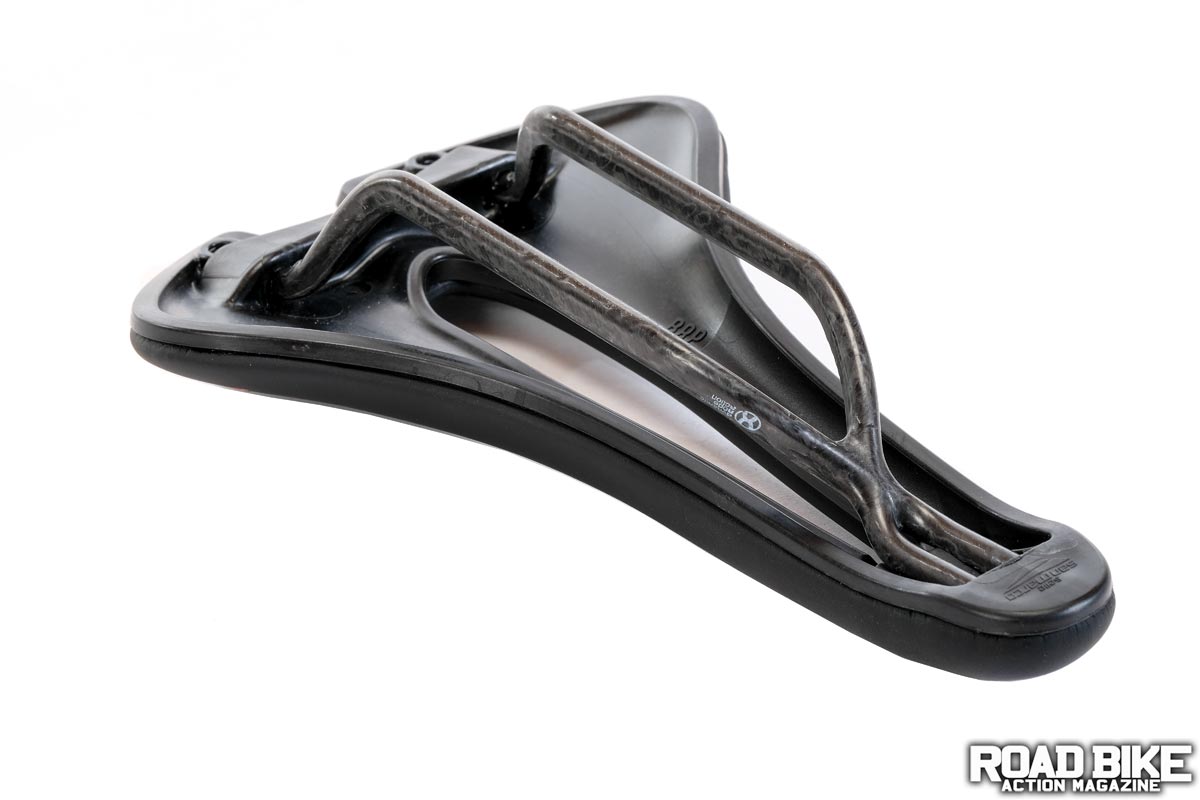 We break it down like this: aggressive riders would likely prefer the Selle, while cyclists who prefer a more relaxed, upright position may prefer the Fizik. On long rides, the Selle lagged behind the Fizik for comfort, but the 100 grams in weight savings does add up in terms of effort exerted.

The Aidon is overbuilt, but Fizik acknowledges this, as it is engineered for maximum compliance and the end user, which is not mirrored in the style and features of their performance-oriented saddles seen in the pro peloton. Selle San Marco’s classy legacy gives the Aspide an edge style-wise, but the overall ride quality made it our preference of the two.

The real question posed by both saddles is whether shorter is better. Just as disc brakes have kicked rim brakes to the history books, short saddles are pushing their long-nosed brethren to the margins of popularity. Other than a few stalwart old-timers, RBA test riders opt for the weight savings, stiffness, style and centralized seating position found with short saddles.

Both the Fizik and Selle San Marco are made in Italy, and just as it is with the nation’s shoe industry, they reflect the country’s legacy of purpose and passion fueled by design and performance.