Double the testing fun on the Santana Evolve 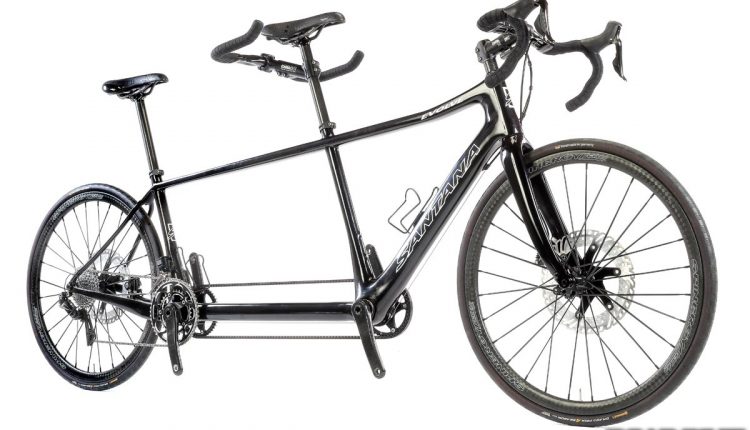 When it comes to riding road bikes, there is little that is “new” for the well-versed staff of RBA. That is until it comes to testing a tandem. Riding a tandem is something that few have experienced, including us.  However, when we got the opportunity to test a Santana tandem, we jumped at the opportunity. Sure, from time to time we’ve seen a few on the road, and there is that husband-and-wife duo who frequently make an appearance at the weekly Rose Bowl training ride.

Not to ruin the suspense, but now with some firsthand experience tucked under our Lycra, we can admit that riding a tandem is both harder and easier and definitely eventful to hit the roads on versus the solo bike we are most accustomed to.

Santana Tandem Bicycles specializes in, you guessed it, tandems. They have a pretty wide variety of offerings that make riding double affordable with price points starting at $3000. This doesn’t happen to be the case with their newest model, the carbon fiber Evolve. The Evolve is an example of their never-ending evolution to maximize performance. 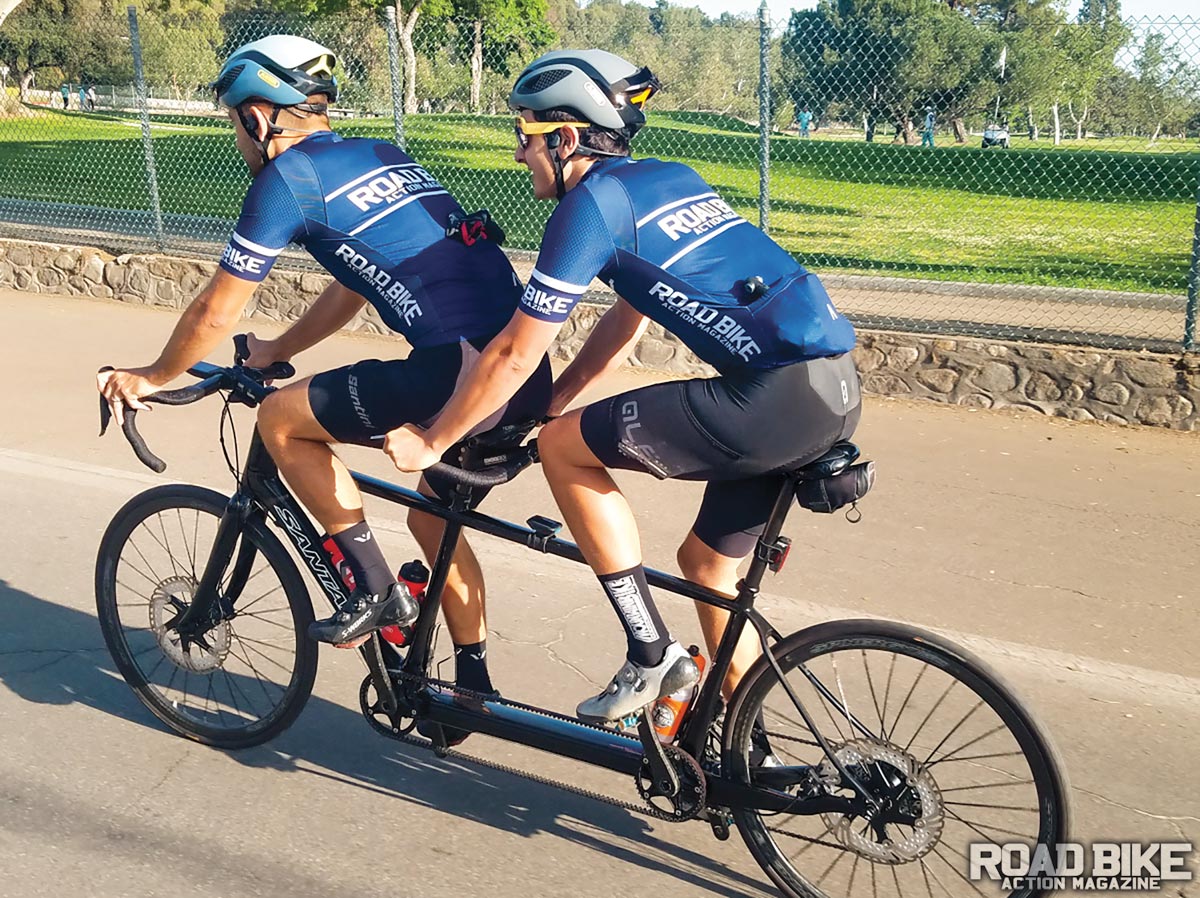 The Evolve carbon frame is custom-made in La Verne, California. Santana claims that the Evolve is also the first-ever monocoque carbon tandem frame ever made. Sure, there have been lug- and tube-constructed carbon tandems in the past, but just as the monocoque construction on a regular bike enhances performance and stiffness, it is even more apparent when the bike is built for two and has a 174cm wheelbase.

It may sound strange, but the Evolve is Santana’s first bike to accommodate a front disc brake. This has also allowed the use of front and rear thru-axles, which increase rigidity. The frame uses the BB386 bottom bracket standard for both cranksets. The front bottom bracket is also eccentric to add tension to the timing belt. Our frame also utilizes internal routing for the electronic drivetrain, but the brake cables are externally routed. While Santana offers their decouplers for easy travel with the Safecase system, our test bike was not fitted with the break-apart system.

Our test bike was spec’d with Shimano Dura-Ace Di2 and a long cage rear derailleur. The bike has a double chainring with a 50/34t ratio with an 11-36 cassette that maximizes the full capabilities of the rear derailleur. Keeping the cranks in sync is a Gates belt, which helps minimize weight and maximize durability. The front cranks on our test rig have 175mm crankarms, while the rear has 170mm.

Santana uses a mechanical disc-brake lever and caliper. Much of this is because their previous models didn’t have a front disc, and they wanted to maintain matching hoods. Also, in case you opt for the decouplers, for additional $5000, the cable is able to also separate, unlike a hydraulic line. The calipers are a single-side-action style made by Shimano. This is matched to a set of massive 254mm (10-inch) rotors that offer amazing stopping power.

Spinergy provides the tandem-specific wheelset that utilizes 28 aero-bladed spokes per wheel. Both wheels have a reinforced 6-bolt disc rotor mount on the hubs.

For our testing, Troy took over the pilot duties, while David was the stoker because Troy didn’t trust David to keep them upright. Getting in sync wasn’t too hard, but starting and stopping were definitely eventful. Once moving, they found that the hardest part was matching pedaling efforts.

“When things get tight and twisty, it is a long bike to manage and easiest if both riders know the turns.”

It was quickly realized that communication needs to be constant. On more than a few occasions, one of the two was doing more than their half of the work, while the other was enjoying the ride. When both riders put their all into the bike, it was an absolute rocket, and the average pace was much higher than that of two people riding separate bikes. Even on the climbs the bike had more than enough gear.

On the downhills, things were a bit different, and almost immediately the speed exceeded the top gear. Speedsters that they are, Troy and David both wished there was a larger top gear and would have happily sacrificed on the climb.

When things got tight and twisty, it was a long bike to manage and easiest if both riders knew the turns. On flat but tight turns the rear cranks would strike when pedaling through turns. It was unsettling but not as bad as doing it on a regular bike. Even being cable-actuated, the brakes were impressive. There is so much weight and stability that you really don’t even use the rear brake unless it’s an emergency stop. The front brake alone provided more than enough power.

Unique to the tandem is the fact that if David would shift his weight too much without communicating, the stiff frame would transfer that motion and the position on the road would change abruptly. On a few occasions, David started to lean in a corner earlier than Troy, and the planned trajectory quickly changed until they both got in sync with their positioning.

At the end of the day, the boys came away surprised at how much fun they had riding the Santana. There were moments of terror as they tried to get in sync, but there were many more moments of fun. Big, in-sync efforts were hard for even the fastest solo guys in the group to match, and this was absolutely satisfying. On the flip side, if one person wasn’t pulling their weight, it would be a frustrating experience.

Our test bike was near the pinnacle of the Santana line and hit the scales at an astonishingly light 27 pounds. Yes, you read that correctly. A sub-28-pound tandem—and we double- and triple-checked. With a rider weight of about 320 pounds and a measured tire size of 29mm, Troy and David ran between 65–70 psi. Even over the roughest of L.A. roads they never had the rim strike the ground, and both felt like they would confidently go a bit lower.

Overall, a tandem of this level is not for everyone. As with any relationship fraught with challenging experiences, a tandem can either quickly strengthen or disintegrate a relationship. At nearly $20,000, the Evolve is also not something that most would want to experiment with. Santana does offer tandems priced for less than $3000.

• The lightest tandem ever?

• Experts only in the group ride