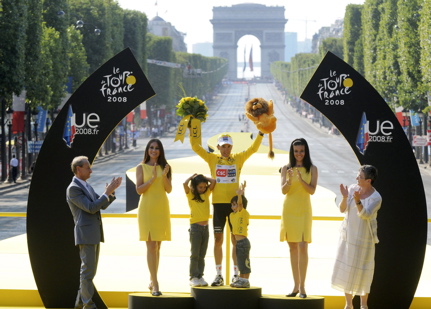 As the fat lady sung La Marcha Real, the Spanish national anthem on the Champs-lyses for the second consecutive year today, 33 year old Carlos Sastre of Team CSC-Saxo Bank was crowned the champion of the 95th Tour De France. It was a team effort that brought Sastre his title in Paris, as his CSC-Saxo Bank squad dominated the Tour De France this year, enabling Sastre to escape on the stage to L’Alpe d’Huez and capture the Maillot Jaune which he maintained until Paris.

The modest Sastre explained at a post-race press conference ‘Today was a really nice day today. The team has done everything to make this Tour as easy as possible for me and even as we came to Paris for the final stage, they continued to work for me. It’s a great atmosphere now and I know that relief has set in and now everyone is happy. It was beautiful to have my children with me on the podium. It’s great to win the Tour de France but my kids represent the biggest victory in my life. They are so important to me and I want to share that moment with them and have them close to me.’

Sastre continued, saying ‘Now I have a couple of races to do in Belgium and Holland before I go to the Olympic Games in Beijing and then start to consider the Vuelta a Espana.’ And Sastre reached out to Tour runner-up Cadel Evans, saying ‘There are so many Australians here today in Paris because of Cadel Evans. For him to finish second again in the Tour de France? well, I feel for him. I have finished third and fourth and I know what it is to get close but I believe he has every right to be happy because he did his best.’ 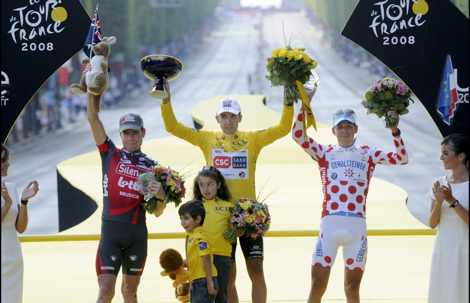 Tour runner-up Evans explained post-race in Paris ‘There were more dramas than I expected or wanted and fighting for every second at the end was exhausting. The crash before the race reached the Pyrenees was very taxing and it cost me a fair bit of strength; I used everything I had in the second week and perhaps that’s the price I paid in the third week. It showed in the final time trial. I rode consistently and reached all the time checks well but I was just not riding as fast as the other guys. That’s the way it goes.’

Evans continued, saying  ‘I’m cursing one Spanish rider, number 29 (Euskaltel’s Gorka Verdugo), who brought me down by accident but, well, that’s racing and there are a few years ahead of me yet. To wear the yellow jersey after such a selective week of racing was really something special and it was an experience that I think every bike rider wants to have. I’ve never worn a world championship jersey but it was quite incredible to be in yellow. It’s a good experience and I’ve learned things that will stand me in good stead for future Tours.

‘To come back and finish second and be able to hold off the rider in third? that’s something I’m happy with. And I’m pleased that I was able to continue after the crash. To come back and get yellow was a bonus. There’s always room for improvement otherwise I might have walked away feeling content with eighth place but I’ve done a lot in the last four years to improve on that result.’

After a difficult Tour De France with few results, Quick.Step was due for a win, which big Gert Steegmans brought home for the Belgian squad on the Champs-lyses today. “The team worked perfectly so that I could win this sprint,” Steegmans said. “I knew the last turn very well and I knew I’d timed it well enough not to be so I had my way clear in the finale. Matteo Tossato rode a pace that was so fast that I could barely get around him. 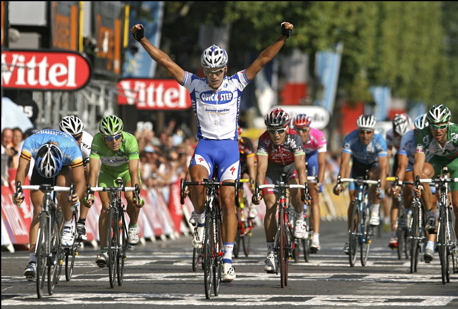 “It’s great to win on the Champs-lyses. Tom Boonen is usually our leader, but the fact that he and Stijn Devolder are not here just added pressure on me. It was not easy to win today, and this victory has been a long time in coming. Our team has done its best has consistently and finally the work gave me that little bit of extra confidence to win.”

Not only did CSC-Saxo Bank win the overall with Sastre, their yellow numbers signified the best team on overall general classification at the 2008 Tour De France.  CSC-Saxo Bank’s Andy Schleck took home the Maillot Blanc of Best Young Rider, while Rabobank’s Oscar Freire brought home the Maillot Vert of Points Classification of Best Sprinter. Although Columbia’s Brit sprinter Mark Cavendish won four out of five sprint stages, without top sprinters like Boonen, Bennati or Petacchi, his Tour wins simply can not be considered as impressive as first thought.

With top climber Riccardo Ricco’ out of the Tour for a doping positive, Gerolsteiner’s ungainly Austrian climber Bernie Kohl took over the Maillot Pois of Best Climber and defended it well all the way to Paris and maintained his hard-fought 3rd place on gc. With his constant attacking that finally paid off in a stage win on Stage 19 to Montluon, Cofidis rider Sylvain Chavanel earned the dossard rouge (red number) as Most Combative Rider of the 2008 Tour De France.

What’s up for the 2009 Tour De France? If 2007 winner Contador & his Astana team are invited back, the Spanish rider must be considered a co-favorite for the win. With his contract with CSC up this year, will Sastre stay with the Danish squad, or move elsewhere for 2009? Will Silence-Lotto beef up their squad next season to better support Evans? And can Christian Vandevelde and his Garmin-Chipotle squad come back next year and repeat their most excellent top 5 performance of 2008 by the man from Lemont, IIllinois? With the lack of defending Tour champion Contador and his Astana team at the 2008 Tour, more questions that answers have come out of the 95th edition of the Tour De France.

How It Happened
Stage 21 of the 2008 Tour de France, at 143km race from Etampes to Paris started at 1.53pm with 145 riders at the sign-in. with no one retiring after the final time trial. Stage 21 had two climbs, the Cat.4 cote de Saint-Remy-les-Chevreuse after 48km and the Cat.4 cote de Chateaufort after 51.5km, with two intermediate sprints: Haut-des-Champs Elysees on the second lap of the finishing circuits 99km and the fifth lap after 118.5km. 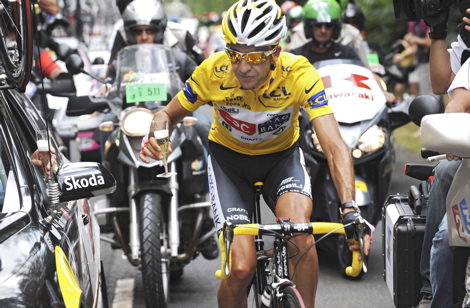 As always, the first part of the final stage of the Tour was ridden at cruising speed and filled with hi-jinx antics, fun and champagne drinking, so the average speed for the first hour was just 27.5km/hr. CSC-Saxo Bank led the peloton into Paris until 92km mark when Auge (COF) was the first to attack. CSC stayed on the front, with attacks by Vogondy (AGR), Brard (COF), Barredo (QST). After 107km Vogondy and Barredo gained a decent advantage: 12′ over Arrieta (ALM) and 20′ over the peloton at the 111km mark but were caught after 117km.

As the final laps of the Champs-lyses circuit commenced, the sprinters teams took control. Gerard (FDJ) attacked with 13km to go and when he was caught FDJ team-mate Gilbert tried to go away, but without success. At -3km, Chavanel (COF) made another attack but was caught soon afterwards. Millar (GAR) led the peloton under the ?flamme rouge’ and then four Quick.Step riders took control. They led into the final turn, with one rider ahead of their protected man, Gert Steegmans who powered home for the win off a super leadout ahead of Columbia’s  Ciolek and earned Quick.Step its only win in the 2008 Tour.