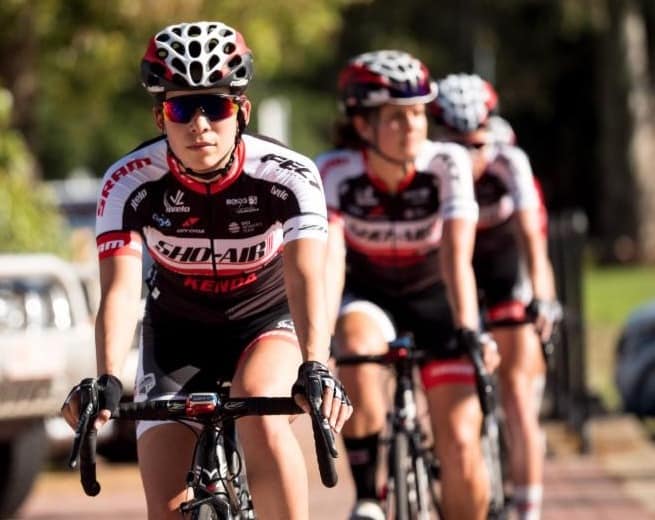 TWENTY20 announces its official name change and title sponsor with Sho-Air International supporting the long-running women’s cycling program for the upcoming 2017 season. The team, which will be known as Sho-Air TWENTY20, also reveals Ridebiker Alliance will continue their partnership with the diverse and growing program.

“The TWENTY20 program hits all of the community, youth and professional targets that are important to us as a company and we are looking forward to a strong 2017. In today’s times, every dollar counts, so I have to be very careful where I allocate funds. Supporting Nicola and these great female athletes is a no-brainer for me. Both Sho-Air and Ridebiker are very proud of the important contributions this team provides to our community and cycling,” said Scott Tedro CEO of Sho-Air International. Sho-Air initially joined the team as their official transportation and shipping partner three years ago and quickly extended into title sponsor. Sho-Air International has a long-standing relationship with Kenda Tires and the partnership with TWENTY20 Cycling program fosters the cycling marketing of the aligned companies.

“It was an easy decision to choose to sponsor the TWENTY20 women’s team, growing our relationship with the Sho Air-Ridebiker organization,” said Ben Anderson, Kenda’s North American Marketing Director.  “The inclusion of the TWENTY20 women’s team is just the next step in that relationship. Having access to these world class athletes as well as a junior development program allows Kenda to develop cutting edge technology that we can use across our entire tire line for riders today and the next generation. The sponsorship of the TWENTY20 team further reinforces Kenda’s commitment to the promotion of our product across the global bicycle market as the riders compete in events around the world,” Anderson added.

“I am grateful to Scott Tedro and his Sho-Air brand for their continued support of the team,” commented TWENTY20 General Manager, Nicola Cranmer, “As both an entrepreneur and investor, Scott understands the direction of the moving needle of women’s cycling and that momentum matches what he and his company are looking for.”

Olympic silver medalist, Mari Holden continues as team director. “Im looking forward to the season ahead and to a growing association with Sho-Air International.” commented Holden. ” We strive as a program to race at the highest level all the while growing and building community focus and we are beyond proud to have them as such an integral part of the program.”
Sho-Air TWENTY20 Cycling enters its 7th season aboard Felt Bikes, riding the Felt FR road frame and Felt DA time trial frame this season.

“We could not be more proud of our continuing sponsorship of the now Sho-Air TWENTY20 Team.  Over the years we have built a relationship with all the girls and feel they are truly a huge part of our Felt family…  From the juniors to the elite pros this is the best women’s program in the world! Hands down,” said Jim Felt, Company Founder, Felt Bicycles. The team’s 2017 Felt bikes continue to be equipped by SRAM, Zipp and Quarq, all long-time partners of the women’s program.

“SRAM is excited to continue our work with such a great team as Sho-Air TWENTY20. The long-term partnership relationship we have already built together is pretty special and the team again proved in 2016 that they have the ability to excel all the way in the ultra competitive UCI Women’s World Tour arena. SRAM, ZIPP & QUARQ are a great match for this technically advanced team and we are enthusiastic to see what Sho-Air TWENTY20 will achieve in 2017,” said Jason Phillips, SRAM Road Sports Marketing Director

The program’s team clothing partnership continues in 2017 with JL Velo, a family operated company in Southern California. “We are thrilled to continue our partnership with the TWENT20 Professional women’s cycling team into 2017.  This is a truly inspirational group of women who constantly work to grow women’s cycling and to empower junior riders through their scholarship program.  They are fantastic Ambassadors on and off the bike, and we look forward to seeing what they accomplish next,”  commented Kate Mills, Owner/Director, JL Velo.

BIKE OF THE WEEK: OPEN MIN.D