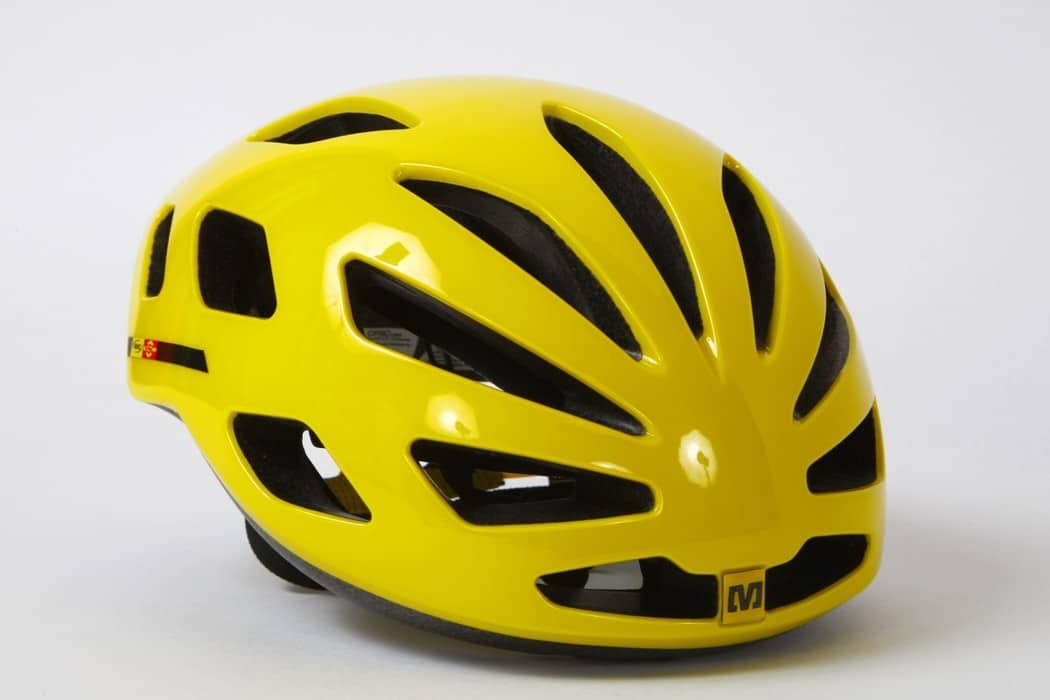 The absolute most important accessory for your bike is a helmet, and there’s no shortage of them currently available. Fit, comfort, style and, of course, safety, are all factors to consider when shopping for a new lid. We tried out three options from companies based across the pond— which one is best for you? Read on to ﬁnd out.

MAVIC CXR ULTIMATE
Mavic is an iconic brand in the cycling world thanks in large part to its support of both professional and amateur racing, but mainly due to its history of technical innovation that began with creating the world’s ﬁrst aluminum bicycle rim in 1926. Today, Mavic is one of the largest wheel brands in the world, and in 2008, the French marque released an impressive line of soft goods, including clothing and footwear, that eventually led to the creation of its own line of helmets.

THE TECH
Mavic bills its CXR Ultimate helmet as an everyday racing helmet that maximizes speed thanks to its greater aerodynamic efﬁciency (over the brand’s other road helmets), yet provides plenty of airﬂow thanks to its 28 vents. Available in four sizes and two colors (yellow and black), the CXR Ultimate is crafted from EPS foam and includes an in-molded plastic shell. Its most distinctive feature is a large section of structural material located front and center on the rider’s forehead, surrounded by a series of long, thin vents in what one tester dubbed a “sunburst pattern.” 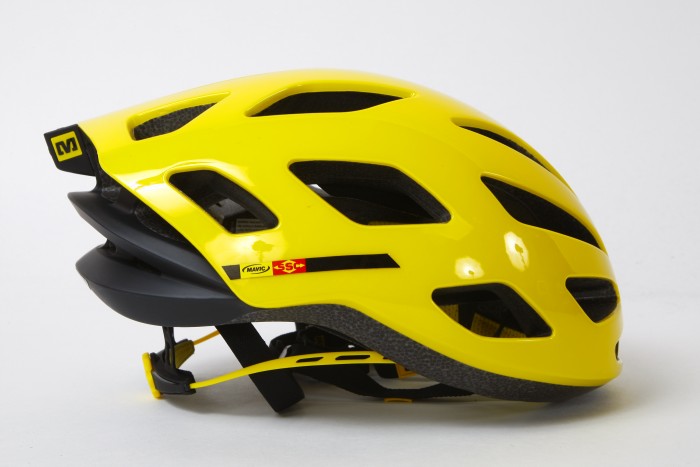 THE RIDE
For helmet designers and manufacturers, balancing aerodynamic efﬁciency and ventilation is a carefully orchestrated dance. Too many ventilation ports will mitigate aerodynamics, while too few ventilation ports (or poorly shaped or positioned ports) will cause uncomfortable heat buildup. The CXR Ultimate does not offer the same level of ventilation as Mavic’s other models (Plasma and Syncro), but there is plenty of airﬂow to keep your head cool on hot rides. The Ergo Hold SL retention system offers a terriﬁc range of adjustment around the circumference of your head, and the dial mechanism is easy to use and is well-built. The rest of the retention system’s plastic straps feel a bit ﬂimsy to the touch, however, and it only offers a relatively scant amount of vertical adjustment. Finally, the overall proﬁle ﬁts a variety of head shapes comfortably, and the padding was well-received.

LAZER Z1
Lazer is the largest helmet company from Belgium, and the brand has always taken a unique approach when it comes to function and design. Take, for example, Lazer’s signature Rollsys retention system, which has long bucked the industry standard of placing a helmet’s closure mechanism at the base of the skull in favor of on top of the head. The Z1 is Lazer’s latest high-end helmet, and it represents a continuation of the qualities that have brought the company its racing and market success. 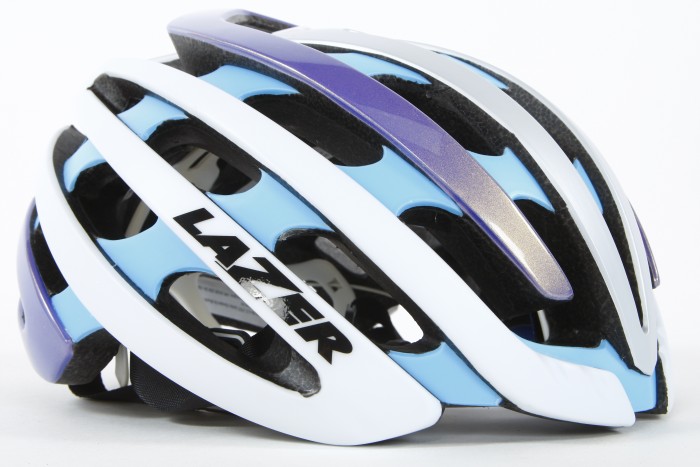 THE TECH
At 251 grams (size medium), the Z1 is the lightest road bike helmet that Lazer has ever produced. Its structure is made from EPS foam and covered with an in-molded four-piece plastic shell. Available in three sizes and 10 colors, the Z1 sports an impressive 31 vents for maximum airﬂow, and its aesthetics are quite similar to Lazer’s other top-tier road helmets. And like those models, the Z1 features Lazer’s Rollsys retention system with a single-hand-operated dial located on top to loosen or tighten the ﬁt. At the back of the head, two oval plastic structures cradle the skull and have ﬁve points of vertical adjustment making up a range of around 25mm. Minimalist padding with X-Static antimicrobial material helps keep the head comfortable, along with keeping the weight down. 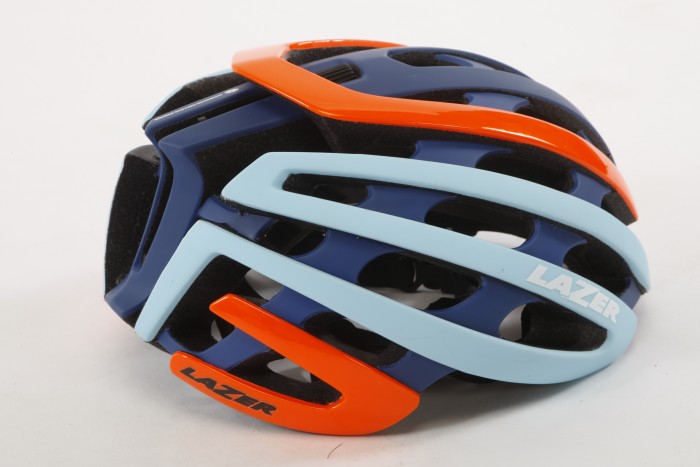 THE RIDE
We’re fans of Lazer’s Rollsys retention system because of its level of precision when it comes to the amount of tightness around your head. But we’ve experienced a love/hate relationship with the system’s back-of-the-head support—some swear by it, but others note that, despite the 25mm of vertical adjustment, the structure just can’t sit low enough on the backs of their heads to provide a preferably supportive ﬁt. The nylon chinstraps are incredibly easy to adjust—slide the hexagon-shaped plastic adjustment piece up or down and you’re good to go. There’s not much padding inside the Z1, and some testers noted that they’d prefer a bit more. And with so many vents, the Z1 offers terriﬁc airﬂow, among the best we’ve tested in quite some time.

KASK MOJITO
Italian company Kask produces a wide array of helmets for cycling, skiing, mountaineering enthusiasts and even construction workers. Founded in 2004, Kask is a relatively young company, but has already seen success in part due to its stylish designs and its presence in the professional peloton atop the domes of riders on Team Sky. Chris Froome famously wore a Mojito helmet throughout his 2013 Tour de France-winning campaign. The Mojito has long been one of Kask’s most popular models, and it’s been continually updated with modest changes to help shed a few grams, enhance comfort and offer more aesthetic options. 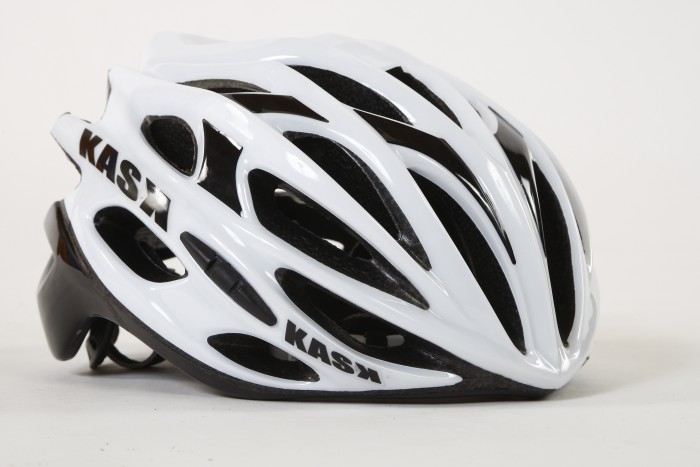 THE TECH
The Mojito features an in-mold foam construction with a plastic shell, and there’s an internal support skeleton as well for greater structural rigidity. Available in two sizes and 13 colors, the Mojito sports 26 vents in a variety of shapes and sizes positioned throughout the helmet to help maximize airﬂow. Plush, antimicrobial padding is positioned throughout the interior of the helmet. The chinstrap system is made up of nylon straps with reﬂective details and a simple adjustment mechanism, but the actual chinstrap itself is made from supple, non-allergenic imitation leather. Finally, the Mojito’s most signiﬁcant feature is its retention system, which features both a single-hand-operated dial and a set of two ridges that are compressed together with two ﬁngers. The system is actually hinged, so it can provide ultra-ﬁne vertical adjustment with a practical range of around 60mm. Like many other Kask models, the Mojito is made in Italy. (Editor’s note: Our test model came with Kask’s old-style graphics and currently available iterations feature a newly designed Kask logo.)

THE RIDE
Most of Kask’s helmets, including the Mojito, feature shapes that are relatively compact compared to other helmets on the market, meaning that they’re not as bulky. This gives the Mojito a streamlined appearance, but it should be noted that this gives the impression that the sizes run a bit small, although they don’t. The overall ﬁt is excellent and ﬁts a wide variety of testers’ heads without issue, although we’ll note that it’s more on the round side than oval. 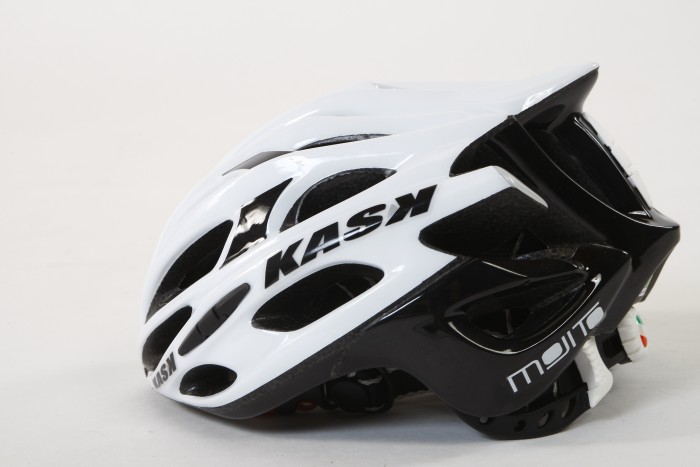 Also, the padding is some of the cushiest around and is placed across a wide area inside the helmet. The faux leather chinstrap feels very smooth against the skin, but the chinstrap’s adjustment points are a touch more cumbersome to engage than we’d prefer. The star of the show is Kask’s retention system, which provides a very impressive range of customization and even lets the user position the support structure very low on the back of the head for an increased feeling of support. Overall, the ﬁt and ﬁnish of the Mojito is top-notch.

THE VERDICT
The Mavic CXR Ultimate has a lot going for it, namely a proﬁle that should appease the vast majority of head shapes out there, as well as comfortable padding and some marginal aerodynamic beneﬁts. It’s also the lightest of the three helmets we’ve tested. The retention system feels a bit ﬂimsy, however, which makes us question its long-term durability. And while beauty may be in the eye of the beholder, to a man, the CXR Ultimate was considered the least visually inspired design of the three helmets featured here.

Lazer’s Z1 carries on the tradition of the Belgian brand’s unique functional features and looks, and it was easily the most well-ventilated of the three helmets we tested. The Rollsys retention system offers plenty of adjustability, but several testers said that the back of-the-head support was lacking, while others found it to be just perfect. The most expensive of the three helmets tested, the Z1 doesn’t come with an unreasonable price tag, but there are lots of other helmets out there with as many—or more—features for the money.

Which brings us to the Kask Mojito. Its ﬁt and ﬁnish are the best of the bunch, and its overall quality is superb and belies its $200 price tag, the cheapest of the three helmets here. Highlights include the amount of vertical adjustment and the faux leather chinstrap. Ventilation is average when considering the whole of the helmet market. It’s very well-padded, but our misgivings would include its shape being a bit on the round side, so it most likely won’t ﬁt as many heads comfortably as either the Mavic or the Lazer. It’s also the heaviest helmet of the trio here, but only by a slim margin. With all that said, if you like the ﬁt, it’s the best value of the bunch.