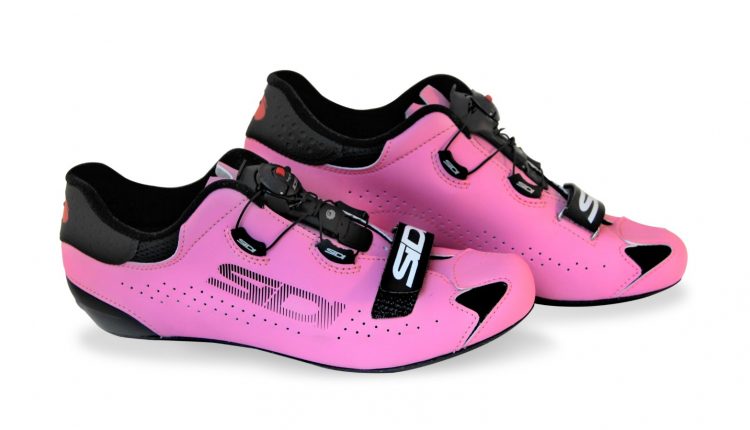 Sidi likes to think that their latest road cycling shoe the, Sidi Sixty, contributed to the successes of a great and very young champion, Egan Bernal, who inspired the model designed for riders with categorized climbs in their DNA with his feedback. The Sidi Sixty is light, high-performance, resistant and naturally comfortable, and now, only for him, absolutely PINK.

‘It was such an exciting Giro d’Italia that kept us in suspense until the end. The last stages livened up the race and gave our company incredible satisfaction. Four stage victories, the pink jersey and the white jersey are quite a result that makes us absolutely proud to be part of this wonderful sport that is cycling.’ said Rosella Signori.

While the six-decade-old name and trusted handiwork are still present, the Sixty bows to modernity with its use
of the now-ubiquitous, synthetic-leather micro-fiber upper (cue the applauding cows).

As opposed to the (still) higher-end $549 Shot model, to pare as much weight as possible, the Sixty loses a second Techno dial and the adjustable heel cup.

Given that Sidi helped pioneered dial enclosures years ago with their Techno dial, the Sixty uses a single Techno 4 dial located over the top of the foot that, with a simple pinch and pull, acts as a quick-release function for super easy on/off. Another handy feature of the Techno 4 rotor dial is the push button that releases a lever to allow micro-adjustments to tighten the shoe.

In addition to the one rotor, the Sixty uses an old-fashioned Velcro strap that uses Sidi’s own polymer locking teeth to ensure that the strap maintains its grip.

As you’d expect of a shoe in this price range, the outsole is comprised of carbon fiber that enjoys a thick and glossy clear coat over the weave pattern. It’s unfortunate that as striking as the carbon sole is, it never gets seen. Just under the toe is an integrated vent that can be run open or closed depending on the climate. There’s also a replaceable heel pad with a rubber stack to help make off-the-bike walking more manageable.

Although there are two camps of thought on how a shoe employs its cable design, the Sixty definitely adheres to a simple, straightforward architecture with just four guides positioned over the forefoot area.